4
We Travel the Spaceways

By Mark Corroto
August 27, 2020
Sign in to view read count
In the summer of 2020 one result of the COVID-19 isolation, and artists inability to tour and perform is that they have time to deal with projects halted by this pandemic. Musicians, producers, and engineers have mixed, mastered and released an abundance of music. Many of the titles have been, and will be covered by our staff, but within this prolific time, we want to give readers a taste of what has been recently released and what is upcoming.

We return often to Matt Wilson's Hug! (Palmetto) (reviewed by senior editor Dan McClenaghan), especially the track "Space Force March/Interplanetary Music" where the Donald Trump's infamous weaponizing of space bumps heads with Sun Ra's vision. In the same vein as spinning satellites is Dan Willis And Velvet Gentleman's The Monk Project (Belle Avenue Records). The saxophonist brings the same 'WTF?' to Thelonious Monk's compositions as he did with his two Erik Satie Projects. His quintet including guitarist Pete McCann and guest Kermit Driscoll who rejig Monk's music with an electric twist, while keeping its spirit alive. Another tribute release is by The Claire Daly Band RAH! RAH! (Ride Symbol Records). Everyone's favorite baritone saxophonist pays tribute to Rahsaan Roland Kirk with delicious covers of "Serenade For A Cuckoo," plus "Volunteered Slavery" that segues into Sly Stones's "Everyday People." 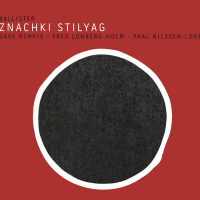 Saxophonist, producer, and label chief at Aerophonic Records Dave Rempis has released multiple projects in CD, LP and digital formats lately. Ballister with Fred Lonberg-Holm and Paal Nilssen-Love follow up Slag (Aerophonic Records, 2017) with Znachki Stilyag which was recorded in 2019. The Chicagoan also features his trio with Elisabeth Harnik and Michael Zerang on Triple Tube (Not Two Records, 2020). Rempis also guests with the trio TOC (Ivann Cruz, Jeremie Ternoy, and Peter Orins) Closed For Safety Reasons (Circum-Disc, 2020). Maybe more exciting (and daunting) are the weekly digital editions released on Bandcamp. Rempis casts his net back to 2005 with Live At The Velvet Lounge and the Triage trio with Tim Daisy and Jason Ajemian. There is also the 8-piece Heaven Orchestra Live In Chicago 2013, Sugar Shack with Daisy and Terrie Ex, Hornithology a duo with Mars Williams, his band Wheelhouse with Jason Adasiewicz and Nate McBride Live At WNUR, The Engines Wooden Legs, a solo recording from 2017 Coast To Coast, and a seemingly unending stream of music. Rempis has created for us, a most wonderful rabbit hole here. 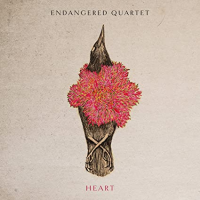 Guilty listening pleasures can also be extraordinary releases, like the pandemic session Solo Guitar Improvisations (Lizard Breath Records) by Dan Phillips. In normal circumstances we might hear him with the Chicago Edge Ensemble or his quartet, but this very intimate 2-CD release feels like a private concert between your ears. Nobody can reimagine a popular song than saxophonist Roy Nathanson and trombonist Curtis Fowlkes. They do so on Heart (Panoramic Recordings) in the Endangered Quartet with Jesse Mills (violin) and Tim Kush (bass), covering everything from Bach to Lennon/McCartney's "Blackbird," and Lead Belly's "Goodnight Irene." Joe Fiedler's 3-trombone plus tuba Big Sackbut Live In Graz (Multiphonics Music) is a smile inducing brass oxymoron of futuristic throwback party music. Certainly a party should also rock. That is, rock from jazz musicians. Drummer Dan Weiss' second Starebaby release Natural Selection (Pi Recordings) features his killer quintet of Matt Mitchell, Craig Taborn, Ben Monder, and Trevor Dunn navigating doom metal by way of electronic music, and improvisation. As long as we are hanging out there, electric guitarist Raoul Bjorkenheim surfs late-period Coltrane on Solar Winds (Long Song Records) with Silvia Bolognesi, Tiziano Tononi, and Emanuele Parrini. The music is simultaneously reverential and audacious.

One of this year's most highly anticipated recordings is the Maria Schneider Orchestra Data Lords (ArtistShare, 2020), a double CD with download video interviews and behind the scene content. The 18-piece orchestra includes Donny McCaslin, Scott Robinson, Ben Monder, and Frank Kimbrough among other stars. As always with Schneider, the music is ambitious and the sound immaculate. Also ambitious is the 15-piece self-titled DNA Orchestra release by Andrew D'Angelo, a digital-only release found on Bandcamp. The music is packed with what D'Angelo describes as "healing, love, darkness, anger, disco dancing, sex, and even more in between the lines." Another addition to the recent spate of Roscoe Mitchell orchestral releases is Splatter (I Dischi Di Angelica) recored with Orchestra del Teatro Comunale di Bologna, Tonino Battista conductor, plus a 45-minute improvisation duo with organist Francesco Filideri at the Basilica di Santa Maria dei Servi. 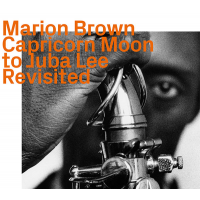 Set aside time for some historic recordings. Werner X. Uehlinger's Hat Hut sub-label ezz-thetics has remastered and reissued several notable sides which include Sun Ra Arkestra's 1965 Heliocentric Worlds 1&2 Revisited, the John Coltrane Quartet My Favorite Things: Graz 1962, Marion Brown's 1965-66 Capricorn Moon To Juba Lee Revisited and 1966-67 Why Not? Porto Novo! Revisited, plus remastered gems by Charlie Parker and Albert Ayler. Lithuania's NoBusiness Records may single-handedly be preserving the memory of the late Sam Rivers with the historic releases Emanation from 1971, the 1977 quintet session Zenith, and 1978 Ricochet with Dave Holland and Barry Altschul. There is also the 577 Records release of TEST And Roy Campbell from 1999 and Dark Tree Records' continuation of Horace Tapscott series Ancestral Echoes -The Covina Sessions, 1976 with The Pan-Afrikan Peoples Arkestra and Live At LACMA, 1998 which adds The Great Voice Of UGMAA choir.

Evan Parker and Paul Lytton's first collaboration was in 1970 and their latest, a 2019 session is Collective Calls (Revisited) (Jubilee) (Intakt Records). Saxophonist Ingrid Laubrock thrives in the duo space and a few new releases include Blood Moon (Intakt Records) with Kris Davis, Kasumi (Intakt Records) with Aki Takase plus an ongoing series of downloadable duets with drummer Tom Rainey called Stir Crazy Episodes. They number twenty-two at the time of this writing and are available on Bandcamp as a "name your price" purchase. Several other duos may grab your attention. Tim Berne & Nasheet Waits' The Coandă Effect (Relative Pitch Records) is the sound of two masters making music, as is How To Turn The Moon by Angelica Sanchez & Marilyn Crispell (Pyroclastic Records), Improdimensions by Agusti Fernandez & Liudas Mockūnas (NoBusiness Records), Christian Rønn & Aram Shelton's Multiring (Astral Spirits), Pictures from Michael Musillami and Peter Madsen, and Channeling The Gateway by LaDonna Smith & Leland Scott Davis (self released). Anthony Braxton performed a series of duos with harpist Jacqueline Kerrod during AngelicA, Festival of Internazionale Di Musica in Bologna heard on Duo (Bologna) 2018. Then there is the massive 8-CD Duo (Improv) 2017 (New Braxton House) where Anthony Braxton wields six different saxophones and contrabass clarinet vs. Eugene Chadbourne's various banjos and guitars. The nearly eight hours of music might just be what gets us through this pandemic. 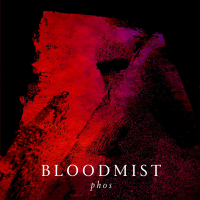 In the trio universe, several recordings capture the moment we are currently surviving. One is Phos (5049 Records) by Bloodmist, Jeremiah Cymerman, Mario Diaz De Leon, and Toby Driver. It's dark electroacoustic sounds require attentive listening and maybe deep dive headphones session in the dark. While the lights are off, why not spin Josh Sinton's What Happens In A Year Cérémonie/Musique (FiP Recordings) with Todd Neufeld and Giacomo Merega. Overflowing with a patient confidence, the trio execute the quietest freely improvised music you may ever hear.

On the heals of the odds-on album of the year The Piano Equation (Tao Forms), pianist Matthew Shipp can be heard on Whit Dickey's Morph (ESP Disk) in duo with the drummer and trio adding Nate Wooley. Add to that Welcome Adventure! Vol. 1 (577 Records) with Daniel Carter, William Parker, and Gerald Cleaver, plus Okuden, saxophonist Mat Walerian's project entitled Every Dog Has Its Day But It Doesn't Matter Because Fat Cat Is Getting Fatter (ESP Disk), and of course a year wouldn't be complete without a duo with Ivo Perelman Amalgam (Mahakala Music). Early fall will also find Shipp's trio with Michael Bisio and Newman Taylor Baker releasing The Unidentifiable (ESP Disk). 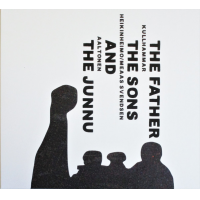 Last up are a discs from two much-loved European labels. Jonas Kullhammar's quartet gives us The Father, The Sons & the Junnu (Moserobie Music Production) with legendary Finnish saxophonist Juhani Aaltonen. This is mature and exceedingly gentle music making culled from the tradition of Scandinavian jazz. Bassist Torbjorn Zetterberg & Den Stora Frågan, his octet, meet at the convergence of composition and improvisation with Are You Happy? (Moserobie Music Production). The small big band threaten hurly-burly but ultimately keep the wheels on with the talents of players such as Kullhammar, Alberto Pinton, Susana Santos Silva, and Mats Äleklint Quartet. The fourth release by Luís Lopes Humanization 4tet Believe Believe (Clean Feed) with Rodrigo Amado, Aaron and Stefan Gonzalez marks their 12 years of existence. The music is a constant tug-of-war between punk metal and cool jazz. The electricity of improvised rock is countered by post-bop swing that reads as confusion, but is far from it. The eight covers from the Italian ensemble Roots Magic heard on Take Root Among The Stars (Clean Feed) include the composers Charley Patton, Phil Cohran, John Carter, Sun Ra, Skip James, Kalaparusha (Maurice McIntyre), Charles Tyler and Ornette Coleman. On this, their third release we affirm their roots run deep and maybe more important, they run true. 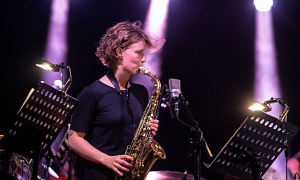