Averse to any linearity, the Idiosyncratic Luís Lopes, a musician connected to Jazz, improvised and experimental music, has been building his career, a simple and singular story, characterised by a unique voice, free of corsets, formal ties or constraints and mannerisms regarding strict stilistical implications. He is an unfollower… experiments himself through paradoxes. Invokes teachings by following standards of subversion to any possibility of pre-established idea. Eminent self-subversion… Introspective timeless trance. Running Multi-international groups, especially his Humanization 4tet (with Portuguese Rodrigo Amado and Texan’s Aaron and Stefan Gonzalez), Lisbon Berlin Trio (with Germans Christian Lillinger, Robert Landfermann), and his “Noise” or “Love Song(s)” Solos, plus his highly recommended records he is growing as an international artist, playing at important Festivals and venues not just in Portugal but in Europe and U.S. Coming from a rock/punk and blues background, while studying at local classic and rock schools, he began studying Jazz at Hot Club Portugal School and then was finalist at Escola de Jazz do Barreiro/Lisbon

Rodrigo Amado This Is Our Language Quartet: Let The Free Be Men

If you are not hip to Portuguese saxophonist Rodrigo Amado, where, as they say, have you been? He has garnered acclaim for many years now, with his own Motion Trio, Lisbon Improvised Players, The Wire Quartet, Luís Lopes' Humanization 4tet, and in duos with Chris Corsano and trios with Kent Kessler and Paal Nilssen-Love. If, though, ... 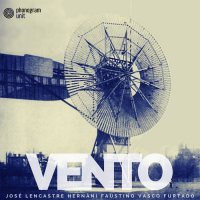 It would be interesting to learn the order in which the six tracks on this recording were laid down. Not so much that it would make for a better listening experience, because this is a thrilling debut, but it would give us clues into the organization and presentation of music by this new label, Phonogram Unit. ...

For a multinational unit to persist, it must offer sufficient justifications to outweigh the logistical challenges. For Portuguese guitarist Luís Lopes, his Humanization Quartet clearly earns its existence. Believe, Believe is the outfit's fourth album since the recording of its debut in 2007, even though it is some years since the third Live In Madison (Ayler, ...

Since his remarkable debut as a leader in 2017, Omniae Ensemble (Nischo Records), drummer and composer Pedro Melo Alves has quickly established himself as a vital force in the Portuguese jazz scene. With an uncompromising sensibility equally committed to avant-garde jazz and contemporary classical music, not to mention the jazz-rock experimentalism of his work with Rite ...