By Mark Corroto
July 28, 2021
Sign in to view read count
2021 marks the twentieth year of Lisbon's Clean Feed Records. Listeners went from thinking ''who knew there was jazz in Portugal?" to acknowledging the label as the flag bearer of jazz' vanguard. Besides releasing music by Evan Parker, Mats Gustafsson, Steve Lehman, Julius Hemphill, Charles Gayle, Anthony Braxton, Elliott Sharp, Eric Revis, Harris Eisenstadt, and Kris Davis, they have introduced the world to the Scandinavian ensembles Friends & Neighbors, Cortex, and the various incantations of Angles. Perhaps of greater importance, the label has documented the rise of Portugal as a new superpower in creative music with such names as Bernardo Sassetti, Carlos Barretto, Hugo Carvalhais, Luís Lopes, Luis Vicente, Rodrigo Amado, Sara Serpa, and Susana Santos Silva, to name but a few. Below are the latest offerings from the label. If some of the names are new to you, that indeed is a good thing. 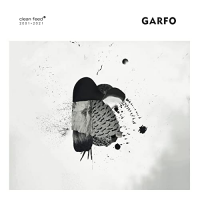 The quartet Garfo, translated as 'Fork' in English, may be the embodiment of Clean Feed Records' philosophy. The four young and relatively unknown Portuguese musicians, tenor saxophonist Bernardo Tinoco, trumpeter João Almeida, double bassist João Fragoso, and drummer João Sousa are featured on the critically acclaimed jazz label. The label is in effect proclaiming their self—titled release Garfo entitled to be placed on the same shelf as releases by Anthony Braxton, Evan Parker, and Joe McPhee. Indeed, it is.

What is immediately apparent here is the level of maturity this quartet possesses. The opening track "Quadrado" by Almeida applies a casual, yet disciplined swing that recalls several generations of young lions from Lee Morgan and Wayne Shorter to Terence Blanchard and Donald Harrison, yet the music also tracks a 21st century approach to improvising. Almeida, who studied with Peter Evans, has the ability to work inside and out, applying extended techniques as displayed on "Improv," where hushed traces of introspective melodies are executed with Sousa's brushes and Fragoso's lingering bass reverberations. The pointillistic approach of "Oito" fires dotted trumpet notes while sailing on a weighty saxophone solo before the clickety-clack of drums settles the score. Each of the ten shortish tracks are sharp and brilliant demonstrations by the latest crop of jazz talent from Portugal. 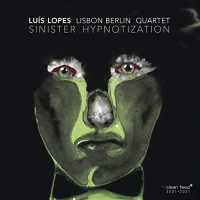 If you thought guitarist Luís Lopes could not turn it up a notch,think again. This one man demolition crew, who can thread a fine needle between jazz, noise, minimalism, and punk rock, formed his Lisbon Berlin Trio with the German duo of bassist Robert Landfermann and drummer Christian Lillinger, releasing their self—titled debut in 2011 and the Line in 2014, both on Clean Feed. He elevates that connection balancing the two Berliners with Lisbon—based pianist (here on Fender Rhodes organ) Rodrigo Pinheiro (RED Trio, Lisbon Freedom Unit). The music acts as a kind of mash—up of Machine Gun and electric Miles with Keiji Haino covering Pete Cosey. In other words, jazz/rock fusion doesn't begin to explain the music of Sinister Hypnotization.

The quartet spin a web of distortion and feedback from guitar, organ, Landfermann's use of FX pedals with his double bass. With Lillinger's dynamic drumming "Identification" crackles and sizzles with an electricity that constantly intensifies. The turbulence of "O Andróide Que Sonhava Ser Humano" (The Android Who Dreamed To Be Human) threatens to disassemble itself under it own weight, but of course its disintegration is but a parlor trick staged by these four magicians. Listeners may come for the noise, but will be charmed by the intoxicating pulse of this session. 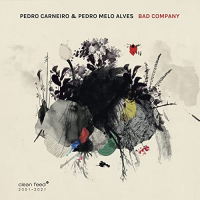 There is something both ancient and yet contemporary about Bad Company by Pedro Carneiro and Pedro Melo Alves. Pairing a marimba, Carneiro, with a drummer, Alves, is not the first thing you might envisage for a series of free improvisations, but then who was the first to eat a banana with nutella on it? Some things just work. Carneiro was trained as a classical percussionist and is also a conductor and composer. His background in contemporary classical music informs Bad Company in so much as the session has all the characteristics of a chamber performance, a very ancient chamber performance. Same can be said of Alves and his prepared drums. Both as a composer and leader, he released In Igma (Clean Feed, 2020), and as a sideman with Luis Vicente's trio, he has modernized drumming by conjuring an ancient pulse. Bells, chimes, and gongs inform "Revelry" as the track inches along an imaginary jungle path. The pair trade off in a slick hesitancy with "A Touch Of Self—Satisfaction" and "A Secret Domain" that serves to heighten the mindfulness of the player and the listener. Even a noisy piece like "Between Retreat And Return" with its battering assault there's an organizing principal in play here. The highlights here include "A Totally Unexpected Joy" with its spiraling momentum and the edgy disquietude of "Gross Exaggeration" that might be the perfect thriller soundtrack. 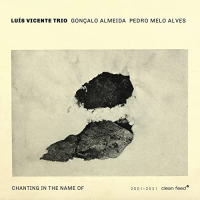 Luís Vicente Trio
Chanting In The Name Of
Clean Feed
2021

The symbol of a triangle may be the perfect representation of the Luís Vicente Trio, owing to the fact that Chanting In The Name Of is a flawlessly balanced recording. This Portuguese trio is led by the perpetually rising trumpet star Luis Vicente, who composed the five tracks. He is joined by bassist Gonçalo Almeida (Rodrigo Amado, Spinifex, Roji, The Selva) and drummer Pedro Melo Alves who can also be heard on Bad Company (see review above). The trilateral balance here is not only in the shared music making also but in the album's audio mix which broadcasts the sound of each musician in equal proportions. This may be best illustrated by the title track which opens with swirling bowed bass, Vicente's poetic trumpet promenade, and the frenetic pulse of Alves' drums. The piece maintains a continuous ascending energy with each musician as the engine. Same can be said of "Anahata" with its energetic call to prayer. Vicente is graced with the gift of Gabriel's trumpet and his ability to raise the dead if he so chooses. Mostly he uses his power to elevate this trio. "Keep Looking" is slathered in meter changes, trumpet growls and blasts, and disarticulated logic. It's a trio searching for (and finding) a center. "Connecting The Dots" borrows from Ornette Coleman's approach to freedom as applied by Don Cherry and "May's Flower" is a simple sweet melody. 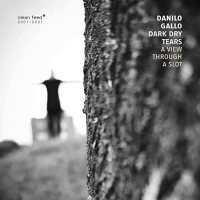 Italian band leader and bassist Danilo Gallo says, "hey guys think about this, we could be rock stars" and he certainly makes a strong case with A View Through a Slot. This is the third release by his quartet Dark Dry Tears following Hide, Show Yourself! (2020) and Thinking Beats Where Mind Dies (2016), both on Parco Della Musica Records. The difference, this time he adds guitarist Lorenzo Corti to a lineup that includes the saxophones of Massimiliano Milesi and Francesco Bigoni and American drummer (with Italian roots) Jim Black (Alasnoaxis, Human Feel, Tim Berne). As with all things Gallo the music is performed with tongue-in-cheek, disguising a jazz record as a rock show. One that Ennio Morricone might have orchestrated. Gallo's bass opens "Demolition," which gets spray—painted by two saxophones and a guitar before things get heavy. Gallo's compositions call for the heavy artillery "I Can't See You" with some funk drumming by Black and cinematic scenes "Rubble Dust" that expand into gargantuan drama. The chamber jazz opening to "Short Memory" lulls the ear into repose only to reverse course and bring the noise. Yet within all this heaviness Gallo composes simple, almost naive melodies like "No boundaries" and dreamy echoing pieces 'Eyes Of Twilight" that whisper among the albums louder music.

Recorded less than three months before he would shuffle off this mortal coil, legendary bassist Mario Pavone recorded this final statement. Those in the cancer community knew of his courageous, nearly 20 year fight with this dreaded disease. Others unaware, simply knew Pavone as a passionate powerhouse bassist. He would anchor recordings and performances by other legends like Paul Bley, Anthony Braxton, Bill Dixon, and Thomas Chapin. It was his partnership with Chapin (who we lost in 1998) that was the genesis of the Pavone we are familiar with today. With dozens of recordings under his own name, the bassist pulled different musicians from several of his ensembles to create this quartet. His frontline includes saxophonist Mike DiRubbo and Pavone's son, guitarist Michael Pavone. Isabella reunites Pavone with drummer Michael Sarin from Chapin's ensembles and Pavone's Nu Trio/Quintet and Sextet. The recording is packed with taut meticulous compositions primarily carried out as a tandem sound generation from guitar and alto saxophone. "Philosophy Series" and "Blue Vertical" zigzag with players deftly simultaneously negotiating the complexities together, and as always with the firm hand of the bassist creating structure. While we have lost the elder Pavone, Michael is the revelation of this recording. He carves lines similar to that of John Abercrombie, that is with sharp lines and clustered attack. While the man is gone, Mario Pavone's music will endure.

Tracks: Revelry; A Touch Of Self—Satisfaction; Restlessly In Circles; From A Starless Sky; A Secret Domain; Between Retreat And Return; A Totally Unexpected Joy; From Street To Street; Gross Exaggeration; Making A Veritable Religion.

Chanting In The Name Of

A View Through a Slot

Tracks: Demolition; No Boundaries; Eyes Of Twilight; The Tree And The Water; Rubble Dust; I Can't See You; Gummy Wall; No Boundaries (reprise); If You Raise A Wall You Get Low; Short Memory.