Pianist-composer Kris Davis has blossomed as one of the singular talents on the New York jazz scene, a deeply thoughtful, resolutely individual artist who offers “uncommon creative adventure,” according to JazzTimes. The Vancouver-born, Brooklyn-residing Davis was dubbed one of the music’s top up-and-comers in a 2012 New York Times article titled “New Pilots at the Keyboard,” with the newspaper saying: “Over the past couple years in New York, one method for deciding where to hear jazz on a given night has been to track down the pianist Kris Davis.” Reviewing one of the series of striking albums Davis has released over the past half-decade, the Chicago Sun-Times lauded the “sense of kaleidoscopic possibilities” in her playing and compositions.

Long favored by her peers and jazz fans in the know, Davis has earned high praise from no less than star pianist and MacArthur “Genius” Grant honoree Jason Moran, who included her in his Best of 2012 piece in Art Forum, writing: “A freethinking, gifted pianist on the scene, Davis lives in each note that she plays. Her range is impeccable; she tackles prepared piano, minimalism and jazz standards, all under one umbrella. I consider her an honorary descendant of Cecil Taylor and a welcome addition to the fold.”

The newest album from Davis as a leader is Capricorn Climber (Clean Feed, 2013), with the pianist joined by kindred spirits Ingrid Laubrock (tenor saxophone), Mat Maneri (viola), Trevor Dunn (double-bass) and Tom Rainey (drums). Davis made her debut on record as a leader with Lifespan (Fresh Sound New Talent, 2003), followed by three progressively inventive and acclaimed albums for the Fresh Sound label: the quartet discs The Slightest Shift (2006) and Rye Eclipse (2008), then the trio set Good Citizen (2010). Davis’s 2011 solo piano album on Clean Feed, Aeriol Piano, appeared on Best of the Year lists in The New York Times, JazzTimes and Art Forum. Davis wrote the extraordinary arrangements for saxophonist-composer Tony Malaby’s nonet project Novela, with the album Novela released by Clean Feed in 2011 and appearing on Best of the Year lists in DownBeat and JazzTimes. The pianist is also part of the collaborative Paradoxical Frog with Laubrock and drummer Tyshawn Sorey; their eponymous 2011 album on Clean Feed was included on Best of the Year lists by National Public Radio, The New York Times and All About Jazz.

In addition to her work as a leader, Davis has performed with such top figures as Paul Motian, Bill Frisell, Tim Berne, John Hollenbeck, Michael Formanek and Mary Halvorson. Davis started playing piano at age 6, studying classical music through the Royal Conservatory in Canada and formulating her desire for a life in music by playing in the school jazz band at age 12. She earned a bachelor’s degree in Jazz Piano from the University of Toronto and attended the Banff Centre for the Arts jazz program in 1997 and 2000. The pianist received a Canada Council grant to relocate to New York and study composition with Jim McNeely, then another to study extended piano techniques with Benoit Delbecq in Paris. She holds a master’s in Classical Composition from the City College of New York, and she teaches at the School for Improvised Music.

The Jazz Gallery has given Davis a commissioning residency to write for her trio with Rainey and John Hébert to take place in May 2013, and the Shifting Foundation awarded her a grant to compose and record a large-ensemble project. About her art, JazzTimes has declared: “Davis draws you in so effortlessly that the brilliance of what she’s doing doesn’t hit you until the piece has slipped past.” Show less

Firehouse 12 to Present the Kris Davis Quartet May 25th 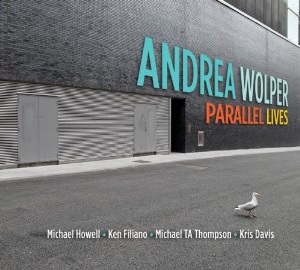 The Girls In Their Dresses

From: Parallel Lives
By Kris Davis

All About Jazz musician pages are maintained by musicians, publicists and trusted members like you. Interested? Tell us why you would like to improve the Kris Davis musician page.