Throughout his long and prolific career, Matthew Shipp has presented several different and impressive trio formations. Among the featured members have been bassists William Parker, and Joe Morris, and drummers Guillermo E. Brown, Whit Dickey, and Susie Ibarra. In 2015, two other premier players, bassist Michael Bisio, and drummer Newman Taylor Baker stepped in as the ...

Mary Had a Baby 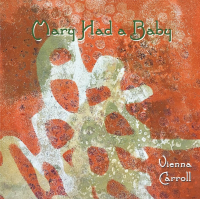 Label: Self Produced
Released: 2021
Track listing: Christmas Time Is Here; Mary Had a Baby; Alone in the World; Santa Baby.

Rich Halley: The Shape Of Things

Accomplished saxophonist Rich Halley has an easily recognizable style which is marked with his brassy, rough-hewn tone, innovative ideas and simmering passion. After starting his own Pine Eagle label, in 2010, Halley added eleven stimulating albums to his discography, featuring bassist Clyde Reed and his son, drummer Carson Halley. In 2019 Halley started fronting the equally ...