Advertise
11
We Travel the Spaceways

By Mark Corroto
October 28, 2020
Sign in to view read count
As listeners we so often typecast musicians and music labels. Artists are pigeonholed into silos: classical, jazz, rock, blues, pop, etc.. Go into any record store (if you can find a brick & mortar one) and this segregation, a forced separation, is also evident. Even streaming services are divided in this manner. Maybe it is just human nature to create species designation for artists. It's a way for listeners, similar to the work of biologists grouping living organisms that are capable of exchanging their DNA, to collect and collate their music. Even traditional record labels do this for us. Think of the branded sound of Alfred Lion's Blue Note Records of the 1960s or even the music you find in today's releases from SteepleChase or Criss Cross Records. Both fantastic labels releasing high quality product, it's just that the listening experience is predictable. Don't get me wrong, that is not a bad thing. Most of us would shy away from your favorite restaurant's special if it was described as "mystery meat." Same for music as dining, we all crave comfort food for our ears.

Add to that list Pyroclastic Records. Pyroclastic, as in the fragments of rock spewed from an erupting volcano. Think of these releases as hot magma, but also the building blocks of island chains that appear from seemingly nowhere birthing new civilizations. Okay, maybe we've gone a bit too far with this analogy, but Davis' Pyroclastic Records is all about advancement and enlightenment. In it's brief existence, founded in 2016, the label has turned heads with several recordings voted 'best of the year' releases. Let's take a brief look at the catalog, and please search AAJ's database for more in depth reviews of individual titles. 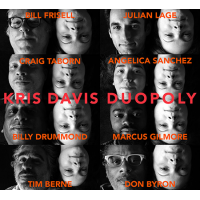 Pyroclastic's debut was the CD/DVD Duopoly (2016) with Davis performing one composed and one improvised track with eight different musicians, including Don Byron, Tim Berne, Marcus Gilmore, Billy Drummond, Angelica Sanchez, Craig Taborn, Julian Lage, and Bill Frisell. The accompanying DVD illustrates just how the so-called 'sausage is made,' by allowing the eye to decipher what the ear is taking in. Davis would return to this duo format with pianist Craig Taborn on Octopus (2018) culling tracks from the pair's live performance recordings. The duos reveal Taborn to be cut from the very same cloth as Davis. Their two pianos, whether prepared or not, are two sides of the same coin. Best example is their other worldly take on Sun Ra's "Love In Outer Space," which could be received as chamber music that flowers otherworldly.

Jumping forward to 2020 and Pyroclastic releases Taborn's Junk Magic Compass Confusion. Eschewing acoustic piano for electric keyboards and synthesizer, Taborn revisits his 2004 Thirsty Ear eponymous group's release with saxophonist Chris Speed, Erik Fratzke (bass), Mat Maneri (viola), and David King (drums). The music often begins in ambient prairies before populating territories through improvisation and electronic processing. For Taborn the electronics never eclipse the improvised and humanoid contributions. There's electronic sound that could be mistaken for Harry Bertoia's sonambient sound sculptures which grow into the pings from deep space. Some Pyroclastic releases might just be missives from the future, like Davis' Diatom Ribbons (2019) which was voted by many critics one of the year's finest releases. Here she weaves Cecil Taylor's voice, some poetry, and Julius Hemphill's spirit around acoustic and electronic gestures with celebrated guests Carrington, Esperanza Spalding, Nels Cline, JD Allen, Ches Smith, and Marc Ribot.

That nod to poetry can be found on clarinetist Ben Goldberg's Good Day For Cloud Fishing (2019). Taking the poems of Dean Young, Goldberg fashions music for himself, Nels Cline and Ron Miles to which Young writes new poems while listing to the performances. The release is packaged with both the before and after poetry, so the listener can also get into the act. Jazz yes, but this is also literature, art, and a clear elucidation of improvisation.

As we set sail upon these creative waters, Pyroclastic is an advocate of pianist/artist/composer Cory Smythe, releasing his trio Circulate Susanna (2018) and more recently Accelerate Every Voice (2020). His latest release features five vocalists, piano, bass, and electronic sampling with Andrew Hill's choral Lift Every Voice (Blue Note, 1970) as inspiration. The vocal music is thoughtful and as adventurous as it gets. So too is the sixth edition of Nate Wooley's epic song-cycle Seven Storey Mountain VI (2020). The concept of this cycle is to simulate the ecstatic experience described by Trappist Monk Thomas Merton in his book of the same name.

Each iteration of SSM builds upon the previous by adding players and intensity. The single 45-minute track opens and closes with a 21-person choir, building intensity throughout. Its major theme is the text from Peggy Seeger's 1979 song "Reclaim the Night" with its protest against sexism and gendered violence. The performance with its samples and electronics resembles the intensity of John Coltrane's "Ascension," but with more of a symmetrical arc.

Angelica Sanchez and Marilyn Crispell perform the two-piano duet How to Turn The Moon (2020). Both artists are established piano voices in the improvisational world, and this right channel/left channel conversation was crafted from seven Sanchez originals and three improvisations. The original material was comprised of minimal sketches for the pair to develop. This tête-à-tête takes place both inside the piano and at the keyboards, reminding listeners that the piano is both a percussive and harmonic instrument.

Kris Davis has been a long standing member of Eric Revis' trio and can be heard on several Clean Feed Records releases including City Of Asylum (2013), Crowded Solitudes (2016) and Sing Me Some Cry (2017) which also includes saxophonist Ken Vandermark. She returns on Slipknots Through a Looking Glass (2020) along with the two-saxophone frontline of Bill McHenry and Darius Jones, and platoon drummers Chad Taylor and Justin Faulkner. The bassist-led quartet presents complex yet swinging music, delivered by an ensemble of extremely strong-willed characters. The sound is both disciplined and challenging. Concepts which this lineup finds neither disparate nor irreconcilable. This release will be a strong contender for jazz album of the year.