In 1980 Peter moved to New York City. He got one of his many breaks when Stan Getz hired him to tour Europe and the U.S. in 1987. Since then Madsen has played with an array of great jazz musicians, performing extensively in Europe and Japan and recording over 70 CD'S with traditionalists like Benny Golson and Stanley Turrentine, modernists such as Joe Lovano and Kenny Garrett as well as funk masters like Fred Wesley and Maceo Parker. Peter has written over 250 compositions of which more than 60 have been recorded.

In 1993 Peter released his fist CD as a leader for Minor Music, an independent label from Germany. Entitled Snuggling Snake's it features ten of his compositions, played by Anthony Cox, Lewis Nash, Chris Potter, Toninho Horta and Rudi Berger.

Veteran pianist & composer Peter Madsen, despite having accompanied or mentored such leading lights and legends as Chris Potter, Maria Schneider, Ravi Coltrane, Stan Getz, Roy Hargrove and Benny Golson, seems to prefer a career flying under the proverbial radar. But there is always something to write home about when his new music comes down the ...

Ron Miles and Other Trumpeters plus Others

This show features several trumpet players with an emphasis on the late Ron Miles. There are also other musicians heard on the program such as Mark Turner, Jason Moran and Gordon Grdina. Playlist Henry Threadgill Sextett “I Can't Wait Till I Get Home" from The Complete Novus & Columbia Recordings of Henry Threadgill & ...

Guitarist Michael Musillami and pianist Peter Madsen have long traveled in the same circles, with Musillami's Playscape label showcasing both musicians in a number of their independently derived projects. But they don't often get to work side-by-side. Aside from Musillami's sextet record, Dachau (Playscape, 2006), the two have only appeared together previously on duo disc, Part ... 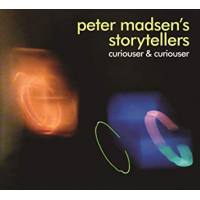