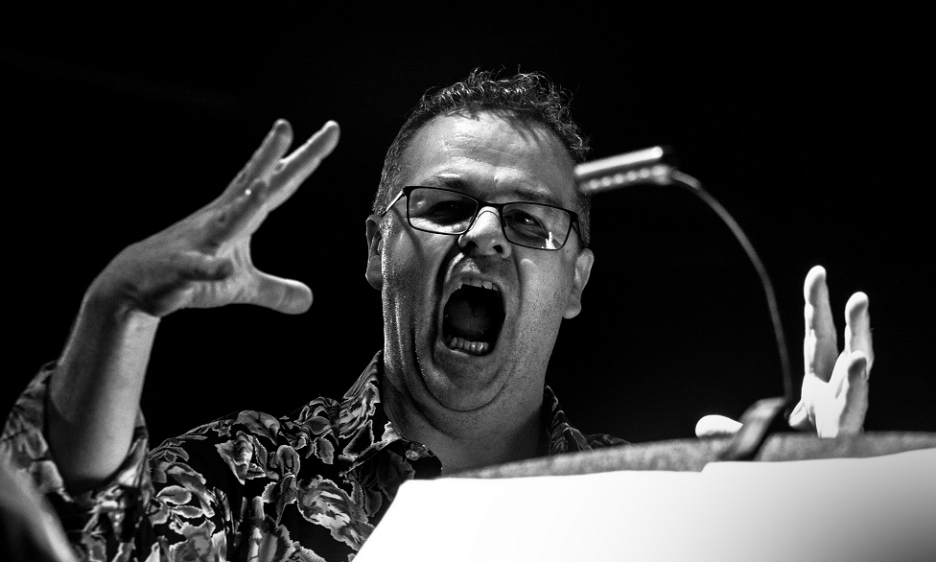 By IAN PATTERSON
April 3, 2018
Sign in to view read count

[Music] changes people. It changes societies. It makes people have hope, vision and inspiration–all those things that make you feel good about life and breathing. That’s why it’s so, so important that we don’t reduce the arts funding–we triple it. &#151Brian Irvine, composer, conductor

Compared to Dublin or cities in the UK, Belfast is usually overlooked when jazz groups tour. When the likes of Wayne Shorter, Charles Lloyd, Ahmad Jamal, Keith Jarrett or Brad Mehldau come to Ireland it's usually a one-stop visit to Dublin and then away. Pat Metheny's November 2017 Dublin/Belfast gigs was the exception that proves the rule.

In recent times actual tours have seen Laura Jurd's Dinosuar and the Trish Clowes Quartet criss-cross Ireland, but, to the frustration of jazz fans here, without touching down in Belfast. It's not that there aren't suitable venues.

Belfast boasts a host of great small, medium and contemporary arena-sized venues of every imaginable character that over the years have hosted Bob Dylan, The Beatles, The Rolling Stones, Jimi Hendrix, Pink Floyd, Pavarotti and, back in the day, even Laurel and Hardy. In wretched political times Led Zeppelin, AC/DC, U2, Elton John, Sting and David Bowie all played here. Since those times Radiohead, Bruce Springsteen, Neil Young and Kraftwork, for example, have all graced the city.

Jazz, on the other hand, at least outside the parameters of the long-running Belfast International Arts Festival, is not on most people's radars. That began to change in 2013 when Moving On Music, steered by veteran promoter Brian Carson, launched Belfast's one and only jazz festival—Brilliant Corners. Adventure and surprise have been the watchwords of the festival from its inception and the 6th edition was no exception.

In previous years Brilliant Corners has toggled between several venues but this year every concert bar one lunch-time free concert was held in Black Box, an outstanding seven- days-a-week venue in the heart of the city's vibrant Cathedral Quarter. This shift makes sense, for multiple venues only really appeal when a festival runs from morning to night, the journeying between them revealing different aspects of a city's character and adding to the festive experience.

There were day-time workshops, several jazz-related films shown in The Bean Bag cinema and one much-lauded solo concert by Kaja Draksler in SARC (Sonic Arts Research Centre), but by and large Black Box was the place to be during the seven days of Brilliant Corners 2018.

With promoters Moving On Music there's often more bang for your bucks and Brilliant Corners 2018 began with the previously unannounced performance of A.R.C.—a Belfast improvisational trio fusing electronic and acoustic sounds. Double bassist Chris Allen bowed profundo drone, Barry Cullen conjured DIY electronic sounds and drummer Saul Rayson worked his kit in orthodox and less orthodox manner, moving from sticks to bowed snare, while employing a Eurorack synth to generate effects. Drone and siren calls formed a constant backdrop, though Rayson's shifting rhythmic pulses ensured the music never drifted into shoe-gazing ambient terrain. Some of the subtleties of his brushwork, however, were lost in the power of the collective voice.

Occasionally, bass ostinato emerged, with Allen orchestrating his pedals to effect what seemed like real-time sampling, creating layers of overlapping sound. Not content to rest on a groove or fixed pattern, the trio forayed into a an extended passage of electronic improvisations—an abstract sci-fi adventure that, between those transfixed to the spot and those in close proximity to the bar, left no-one in Black Box sitting on the fence.

Blue Whale was billed as a jazz-punk band and there was certainly plenty of bullish energy and fiery improvisation about the Belfast quartet. The dual guitars of Michael O'Halloran and Ben Behzadafshar wove angular, mathy lines over bassist Andrew Melville and drummer John Macormac's punchy grooves. At its most complex the heady brew evoked Discipline-era King Crimson on speed, punctuated by explosions of punkish anarchy. Solos were rationed, with Blue Whale's compositions rarely stretching the three-minute mark. Surprisingly, despite the concert lasting barely fifty minutes, it felt very much like less was more. After all, how many pulsating two or three-minute instrumentals can a person absorb before they all blur into one? A festival band if ever there was one.

In bygone days, flutists, pipers and drummers would lead armies into battle; if Blue Whale spear-headed the attack, then all foes would surely fall away, or else fall under the spell. Potent stuff.

The Saturday and Sunday afternoon gigs have proved highly popular in recent editions of Brilliant Corners and there was nothing that The Beast From the East—the colourfully titled Siberian weather front whose snow and ice brought large parts of the country to a standstill—could do to stop the faithful turning up for Ronnie Greer's searing blues sermon.

Greer, the doyen of Irish blues guitar, was joined by special guest Jim Mullen. Glaswegian Mullen, a five-times-winner of 'Best Guitarist' in the British Jazz Awards, made his name alongside Dick Morrissey, with whom he recorded half a dozen albums in the 1970s and 1980s, and has also collaborated with Jimmy Witherspoon, Gary Husband, Claire Martin, Stan Sulzman and Mose Allison, amongst many others. The quartet was rounded out by two of Ireland's finest -Scott Flanigan on organ and Dominic Mullan on drums

Greer and Mullen's respective blues and jazz idioms dovetailed beautifully on a set that ran from easy swing (Toots Thielmans's "For My Lady") and caressing ballads (Don't Go to Strangers") to samba-laced grooves (Bruno Martino's "Estate") and intimate duets ("Stompin' at the Savoy"). The two guitarists traded solos liberally, Mullen's jaw- dropping fluidity referencing his primary influences—Wes Montgomery and George Benson. Mullen's thumb in lieu of a plectrum echoed Montgomery's technique, while his scatting on a refreshingly swinging version of "Summertime" was straight out of the Benson school. Greer's forays were more rooted in the Chicago blues tradition, although he revealed his jazz chops on a visceral interpretation of Charles Mingus's "Nostalgia in Times Square" from his album The Jazz Project (2016). Central to both guitarist's respective idioms, however, was the primacy of soulfulness over virtuosity.

No less impressive was Flanigan. Fresh from his Take 5 residency—a project run by Serious to help stimulate the careers of promising jazz talent—the organist proved a first rate accompanist and an impassioned soloist, notably on the Gershwins' "Summertime," where his fiery Hammond organ-esque improvisation stirred memories of Brian Auger—with whom Mullen played in the early 1970s—in his heyday.

Original takes on Earth Wind and Fire's "After the Love Has Gone" and Bobby Hebb's "Sunny" added to a varied set. A rousing version of Sonny Rollins' "Tenor Madness" saw closing salvos from all, including a fine trumpet solo from special guest Linley Hamilton. Serious fun.

The Irish showcases coincided with a visit from members of the Jazz Promotions Network, a body representing eighty organisations from across the UK and Ireland. The JPN aims to build audiences for jazz, provide opportunities for musicians and promoters, co-commission projects and tours, and in general, to advocate for jazz—and related music—nationally and internationally.

Derry guitarist Joseph Leighton, currently studying at Trinity College of Music in London, was championed by Moving On Music as part of its inaugural Emerging Artists programme in 2017. That meant an appearance at Brilliant Corners 2017 leading a trio with double bassist Conor Murray and drummer James Anderson. This time around Jack Kelly held the upright bass, with Anderson once more on the drum stool. The short set comprised Leighton's original compositions, "Planet 9," the ballad "Mirror Lake" and the more up-tempo "Caspar," plus the jazz standard "I'll Be Seeing You." Leighton's writing, as you might expect from a jazz student, followed the jazz standards roadmap, and it was his lyrical expression as a soloist that most impressed. The trio performed admirably to an appreciative audience and was just beginning to hit its stride on the delightfully cheery last number. Another half an hour would likely have seen a looser, more flowing trio sound emerge but there will be plenty more opportunities for these young, rising stars of Irish jazz to strut their stuff.

Though Sue Rynhart has played a number of jazz festivals, including a memorable performance at Bray Jazz Festival 2016, the fact is that it's no easy task trying to stick her music in a box. As this performance demonstrated jazz is indeed one part of the mix, but there are so many more colors to Rynhart's palette. Bassist Dan Bodwell has been the rhythmic motor in what has mostly been a duo until quite recently, providing vibrant ostinatos and lithe accompaniment to Rynhart's singular singing style. Part traditional folk, part avant-garde pop, Rynhart swung between the brooding poetry of "Little Red Fox" and the lulling balladry of "Penny for your Thoughts" to the infectious idiosyncrasy of "Viper," her seductive vocals buoyed by Bodwell's earthy bass lines. Francesco Turrisi, who guested on Rynhart's second album Signals (Mrsuesue Records, 2017), brought additional timbres on frame drum and organ. On "Silliest Game" his intro on a hybrid, custom built lute-cum-oud was spellbinding. The Italian multi-instrumentalist's timeless folkloric and church-like nuances brought out the emotional depth of Rynhart's compositions, suggesting that as a trio, the singer can take her hypnotic, inimitable music in entirely new directions.

Cork trombonist Paul Dunlea can be found in a wide variety of settings, although it's as a jazz musician/arranger that he's best known, having played/recorded with the likes of Marshall Gilkes, Taylor Eigsti, Cassandra Wilson, Peter Washington, Lewis Nash and Billy Drummond. Here, backed by his quintet of seven years standing, Dunlea demonstrated his skills as a soloist, composer and arranger, leading his group through fairly complex charts notable for their melodic character.

Drummer Alyn Cosker, bassist Barry Donohue and pianist Leopoldo Osio proved a lithe and dynamic rhythm section, with Venezuelan Osio's solo excursions raising the temperature a notch or two. Much of the music's charm resided in the rich harmonic lines woven by tenor saxophonist Ben Castle and Dunlea, though there was individual fire aplenty, notably from Castle and Dunlea on "Heads or Tails," an episodic number that concluded on a quieter note with Donohue's beguiling, unaccompanied bass meditation.

At its most intimate Dunlea's music swayed between achingly lyrical and melodically uplifting, with the transitions to more robust ensemble passages building gradually but surely, like day following night. The final tune, a post-bop burner of sure rhythmic compass and stirring solos—no less so than from the continually inventive Cosker—set the seal on an impressive set. Dunlea is undoubtedly an assured trombonist, but perhaps his greatest strength lies in his composing, while his main instrument is arguably the ensemble he writes for— which in this case was most persuasive.