By Jerome Wilson
April 4, 2018
Sign in to view read count
Jazz musicians today sometimes draw on all sorts of popular culture for inspiration, including the television shows they grew up with. Here are two fine examples. 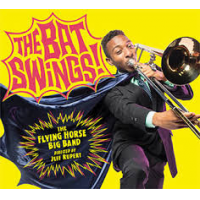 The University of Central Florida's Flying Horse Big Band presents a set of big band jazz based on soundtrack cues from the 1966 Batman TV show. That is no stretch at all since that music was originally written by two of the great arrangers of the period. Neal Hefti composed the famous theme and the rest of the show's music came from Nelson Riddle.

The band brings these tunes to vivid life with plenty of appropriate Sixties' hipster cool in the arrangements. "Batman Riddles The Riddler" is vintage "bachelor pad" music, a swaying cha-cha featuring rippling guitar by Ryan Waszmer and brawny trombone by Christian Herrera. "Batman Blues" is a swaggering blues that could have been written for the Count Basie band with belting trumpets and moaning saxophones, "Kitka" is a romantic ballad in the Henry Mancini style with sleek work by the sax section and "Holy-Hole-in-the-Doughnut" has the band swinging a subtle Latin pulse and providing room for rich tenor sax by Andy Garcia and elegant piano by Mudel Honore.

Bits of familiar music from the show crop up occasionally like the whirling sounds heard whenever the screen spun and the themes for various villains like The Joker, Riddler, and Penguin but they all appear on "Murcielago en la Cueva" mixed in with sinister motifs, brassy chase music and a bit of organ-and-guitar grooving before the "Batman Theme" smashes through in all its "da-da-da-da-da-da-da" glory at the climax. Michael Philip Mossman wrote most of the arrangements for this project and this is his wildest concoction.

Not everything here is Batman related. "Spider-Man Theme" is a jumping rendition of the theme for the 1966 cartoon series about everybody's favorite web-slinging super-hero that features Richard Drexler's organ rolling against screaming brass. Then there's "Amazing Grace," arranged by the band's leader, Jeff Rupert done as a stately, swaying walk with Drexler and Waszmer in front of the band twanging and murmuring the blues. 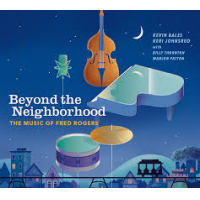 Kevin Bales & Keri Johnsrud
Beyond the Neighborhood: The Music of Fred Rogers
Self-Produced
2018

The Bat Swings! is fun. Beyond The Neighborhood is something special. This CD consists of songs written for the beloved children's show, Mister Rogers' Neighborhood, by its star and producer, Fred Rogers. In the hands of pianist Kevin Bales and vocalist Keri Johnsrud this music translates very well into a jazz setting.

Rogers' songs with their messages about self-confidence, friendship and universal love as are pertinent for adults as well as children, especially these days. Musically the original melodies are basic but strong enough to work in all the rearrangements that Bales and Johnsrud create. "It's You I Like" becomes fast-paced bebop, "Look And Listen" adapts nicely to a funky New Orleans groove, "I Like To Take My Time" sounds beautiful as measured gospel and "Just For Once" glides over an exotic tropical beat.

Keri Johnsrud's singing throughout is remarkable, light and soft with elements of poignancy, innocence and sometimes even sensuality. Kevin Bales' piano can gently float over the melodies or pound rhythmically as called for, sometimes evoking the touch of Rogers' own musical director, pianist Johnny Costa. The rhythm work of Billy Thornton and Marlon Patton is sensitive to the needs of the music but not above some fun embellishments like circular drum rhythms on "Just For Once" and "Find A Star" that come out of Ahmad Jamal's famous "Poiniciana" groove.

This session is a delight. It pays tribute to Fred Rogers' music and spirit in a fashion that glows with respect and carries over some of the powerful messages of the show itself. It's delicate and moving and one of the highlights of the year's music so far.

Beyond the Neighborhood: The Music of Fred Rogers