Neal Hefti was an American jazz trumpeter, composer, tune writer, and arranger. He was perhaps best known for composing the theme music for the Batman television series of the 1960s, and for scoring the 1968 film The Odd Couple and the subsequent TV series of the same name.

He began arranging professionally in his teens, when he wrote charts for Nat Towles. He became a prominent composer and arranger while playing trumpet for Woody Herman; while working for Herman he provided new arrangements for "Woodchopper's Ball" and "Blowin' Up a Storm," and composed "The Good Earth" and "Wild Root." After leaving Herman's band in 1946, Hefti concentrated on arranging and composing, although he occasionally led his own bands. He is especially known for his charts for Count Basie such as "Li'l Darlin'" and "Cute".

As the actors Adam West and Burt Ward slid down to the Batcave during the title sequence of the twice-weekly 1960s series Batman, they emerged as Batman and Robin to the accompaniment of one of the best-known television themes of all. Built around a simple 12-bar blues, Neal Hefti’s “Na-na-na-na Na-na-na-na Batman!” theme was sung in school playgrounds across the world, and became the most-recorded song of 1966.

Hefti was a brilliant composer and arranger who created the scores for many other television shows and films, notably the two Neil Simon movies The Odd Couple and Barefoot in the Park. His score for Harlow included the song Girl Talk which has become a jazz standard.

Away from the world of Hollywood Hefti will be remembered as the man who shaped the sound of the postwar Count Basie Orchestra, and who also produced dozens of skilful, well-crafted arrangements for Woody Herman and Harry James.

Born in Hastings, Nebraska, Hefti was a child of the jazz age, and because his mother was a music teacher, he started piano lessons at the age of 3, becoming well-versed in theory and harmony by the time he took up the trumpet at 11. After winning several school prizes, he was to start making his living as a jazz trumpeter in the big bands of Charlie Barnet and Charlie Spivak.

He was already writing arrangements, having taught himself by trial and error in high school. He was supplying local dance bands with music well before he graduated.

After travelling to California with Spivak to make a film, Hefti stayed on the West Coast, joining Woody Herman’s band in 1944. Although he played in the trumpet section, this was when his arranging began to take precedence over his playing.

Hefti married the band’s singer, Frances Wayne, in 1945, but neither of them remained long in the group thereafter, as they settled in New York, with the idea that Hefti would focus on being a freelance studio musician and arranger. Writing in every genre and for all sizes of ensemble, he became adept at using small forces to create a big sound, and this stood him in good stead when economics forced Basie to scale down to an octet in 1949. Heft wrote numerous arrangements for the group, which sounded remarkably like a full big band on record, thanks to the skill of his settings.

When Basie eventually re-formed his full orchestra, Hefti became one of his principal writers. The album The Atomic Basie remains the best work that the group did in the 1950s, playing entirely Hefti’s arrangements.

He had started writing for Harry James in the late 1940s, but in the 1950s Hefti furnished James with numerous compositions, designed to feature the leader’s trumpet and the band’s star drummer Buddy Rich.

Nevertheless, Hefti was by this time writing in a similar style to that which he used for Basie, giving rise to the apocryphal story that when the two bands met on a television show, Basie drily asked James: “Are you going to play our arrangements first, or are we?”

Hefti also fronted his own band for a while in the 1950s, making such discs as The Band with Young Ideas, and he wrote and conducted albums for his wife. He contributed to some of Frank Sinatra’s most popular albums, including Frank Sinatra and Swinging Brass, which he also produced.

From the early 1960s onwards, he was increasingly involved in the world of films and television, winning a Grammy award for his Batman theme. After his wife’s death in 1978, however, he ceased to write and record new music. Nevertheless, not least because Basie continued to commission other writers to replicate his style, his effect on big band arranging and on film scores remained extremely influential.

Neal Hefti at the Movies

Barefoot In The Park 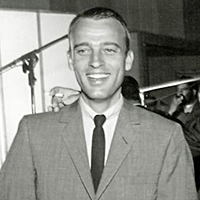 All About Jazz musician pages are maintained by musicians, publicists and trusted members like you. Interested? Tell us why you would like to improve the Neal Hefti musician page.