Throughout his career, Buddy Morrow loved playing with big bands and doing what he could to keep nostalgic swing alive. He began playing trombone when he was 12 and within two years was working locally.

Morrow developed quickly and moved to New York, where he studied at the Institute of Musical Art. He made his recording debut in 1936 with singer Amanda Randolph and trumpeter Sharkey Bonano.

In 1945, at age 26, Morrow formed his own big band but it quickly failed. He became a studio musician for the remainder of the decade. In 1950 he formed a new orchestra that had strong success, giving an R&Bish sound to older standards and having a hit with "Night Train."

Morrow spent most of the 1960s and '70s as a studio musician but he worked a bit with the World's Greatest Jazz Band in 1970; in the late 1970s he took over Tommy Dorsey's ghost band. Since then Morrow has been one of the few full- time big band leaders, performing melodic dance music based in the swing era. 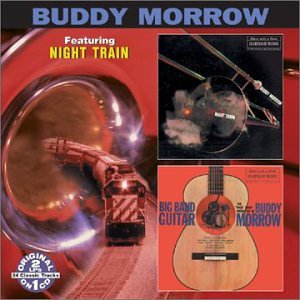 All About Jazz musician pages are maintained by musicians, publicists and trusted members like you. Interested? Tell us why you would like to improve the Georgie Auld musician page.