Sam Butera was a saxophone player, best noted for his collaborations with Louis Prima and Keely Smith. Butera is frequently regarded as a crossover artist who performed with equal ease in both R & B and the post-big band pop style of jazz that permeated the early Vegas nightclub scene.

Butera was born and raised in New Orleans, where his father, Joe, ran a butcher shop and played guitar in his spare time. He heard the saxophone for the first time at a wedding when he was seven years old, and, with his father's encouragement, he began to play.

Butera's professional career blossomed early, beginning with a stint in big band drummer Ray McKinley's orchestra directly after high school. Butera was named one of America's top upcoming jazzmen by Look magazine when he was only eighteen years old, and, by his early twenties, he had landed positions in the orchestras of Tommy Dorsey, Joe Reichman, and Paul Gayten.

As the big band era wound down and heavy touring became less common among jazz musicians, Butera re-settled in New Orleans, where he played regularly at the 500 Club for four years. The 500 Club was owned by Louis Prima's brother, Leon, and it was this connection that lead him to his much-heralded Vegas-based collaborations with Prima and Smith.

Prima transitioned from big band to Vegas somewhat hastily, having signed a contract with the Sahara without having first assembled a back-up band. From his Vegas hotel room, Prima phoned Butera in New Orleans and had him assemble a band posthaste. Butera and the band drove from New Orleans to Las Vegas in such a hurry that they had not taken time to give their act a name. On opening night in 1956, Prima asked Butera before a live audience what the name of his band was. Butera responded extemporaneously, "The Witnesses," and the name stuck.

Butera remained the bandleader of The Witnesses for the better part of the next twenty years. During that time, he performed with Louis Prima and/or Keely Smith on such Prima-associated classics as "Old Black Magic," "Dig That Crazy Chick," "Just a Gigolo/I Ain't Got Nobody," "(Come on a) My House," and "I Want to Be Like You" (from Disney's The Jungle Book).

He is noted for his raucous playing style, his off-color humor, and the innuendo in his lyrics. The arrangements he made with Prima have been covered by David Lee Roth, Los Lobos, Brian Setzer, and Big Bad Voodoo Daddy. In addition to his accomplishments as a saxophonist and composer, Butera is widely regarded as the inspiration for the vocal style of fellow New Orleans-born jazz singer, Harry Connick, Jr..

Sam Butera was featured in the episode of Space Ghost: Coast to Coast. Sam's advice for the host on getting "chicks, like a fox [insert purr]" is, "Well, first a little music.a little jive talk. You gotta call her baby, sweetheart, darling, you know all the names that go along with love." When he sang part of "Just a Gigolo" The hosts found it familiar and he began to tell how David Lee Roth stole the song from him. "I wrote that arrangement thirty four years ago the one that David Lee Roth stole from me." "he came in one night to see me you know and after the show he walked up to me and said "Hey Sam!" and I said who are you he said "I'm David Lee Roth" You know what I tell him I said give me my money and he turned right away and walked out."

Sam Butera played a part in the movie the Rat Race starring Debbie Reynolds and Tony Curtis. He played a scam artist along with Joe Bushkin who fleeced Curtis out of his instruments. The music can be heard on the LP and the CD released by Dot as a soundtrack of The Rat Race. 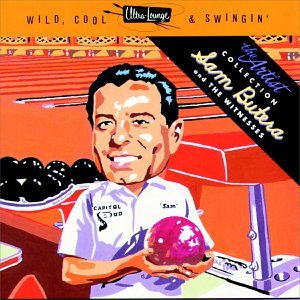 All About Jazz musician pages are maintained by musicians, publicists and trusted members like you. Interested? Tell us why you would like to improve the Sam Butera musician page.