A colorful and versatile musician who was comfortable while on the piano, or stretching out on the Hammond organ. Milt Buckner was also quite the character and very much the jovial entertainer.

Orphaned as a child, Buckner was taught music by an uncle in Detroit. He started playing piano and arranging for local bands such as The Harlem Aristocrats and The Dixie Whangdoodles - by the late 1920s. After joining drummer Don Cox's band in 1932, Buckner began experimenting with patterned parallel chords, becoming famous as the earliest purveyor of what came to be known as "block chords" or "locked hands" style;, he then attracted the attention of McKinney's Cotton Pickers in 1934 for whom he wrote arrangements.

Buckner continued working with the local Detroit groups of Don Cox and Jimmy Raschel, until he joined Lionel Hampton's big band as pianist and arranger in November 1941, acting as pianist and staff arranger, and remained there for seven years, where his recorded arrangements included “Tempo's Birthday,” “Slide Hamp Slide,” “Overtime,” “Rockin' In Rhythm,” and the perennial “Hey! Ba-Ba-Re-Bop,” and “Hamp's Boogie Woogie.” Hamp's free-wheeling orchestra suited Milt admirably; the on-stage histrionics, the jump and swing repertoire and the musical and visual appeal of the band fit his charact er like a glove.

While with Hampton, Milt broke away sporadically to pursue his own career on Savoy Records from 1946 to 1948, after getting an early taste recording a lone side under his own name for Hamp's Hamp-Tone label. Recording with a small quartet or quintet, he achieved sufficient success to quit Hamp's band in 1948 at which time Milt quickly formed his own orchestra which recorded for MGM Records.

Around this time that Buckner began to concentrate on playing organ, and he worked as a solo or in harness with Jo Jones, Sam Woodyard and Illinois Jacquet, frequently returning to Hampton for record and concert dates.

Milt returned to Hampton in 1950 for another two years during which time he switched from piano to organ - after being influenced by Wild Bill Davis' playing on Louis Jordan's “Tamburitza Boogie” - an instrument he was largely to stick with for the rest of his life.

With the rise of the international jazz festival scene in the 1960s, he began to tour extensively. He died in 1977 shortly after setting up his organ for a live performance with his old buddy Illinois Jacquet at Jazz Showcase. He was just 62.

Milt Buckner left us quite a recorded legacy from the years of 1946 until his death. There are many of his works available currently.Recommended listening: The Chronological Milt Buckner 1946-1951 (2002, Classics CD 5032) - 20 tracks featuring all the issued recordings he made as a pianist with his own band for Savoy, Regent and MGM, in both big band and small jump combo formats, prior to his switch to hammond organ. The Lionel Hampton Story (2000, PROPERBOX 12) - 4CD box set featuring many recordings spotlighting Buckner as pianist and arranger with the high-flying Hampton band. 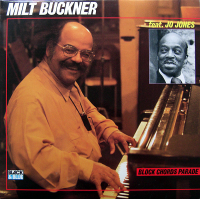 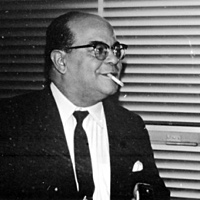 All About Jazz musician pages are maintained by musicians, publicists and trusted members like you. Interested? Tell us why you would like to improve the Milt Buckner musician page.