Neal Hefti was an American jazz trumpeter, composer, tune writer, and arranger. He was perhaps best known for composing the theme music for the Batman television series of the 1960s, and for scoring the 1968 film The Odd Couple and the subsequent TV series of the same name. He began arranging professionally in his teens, when he wrote charts for Nat Towles. He became a prominent composer and arranger while playing trumpet for Woody Herman; while working for Herman he provided new arrangements for "Woodchopper's Ball" and "Blowin' Up a Storm," and composed "The Good Earth" and "Wild Root." After leaving Herman's band in 1946, Hefti concentrated on arranging and composing, although he occasionally led his own bands. He is especially known for his charts for Count Basie such as "Li'l Darlin'" and "Cute". 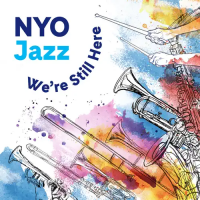 The “NYO" in NYO Jazz is shorthand for National Youth Orchestra, a marvelous concept that should be cloned and shipped to as many cities, towns and villages as possible. NYO, comprising carefully chosen musicians, ages 16 to 19, from across the U.S.A. is based at Carnegie Hall's Weill Music Institute in New York City, and We're ...