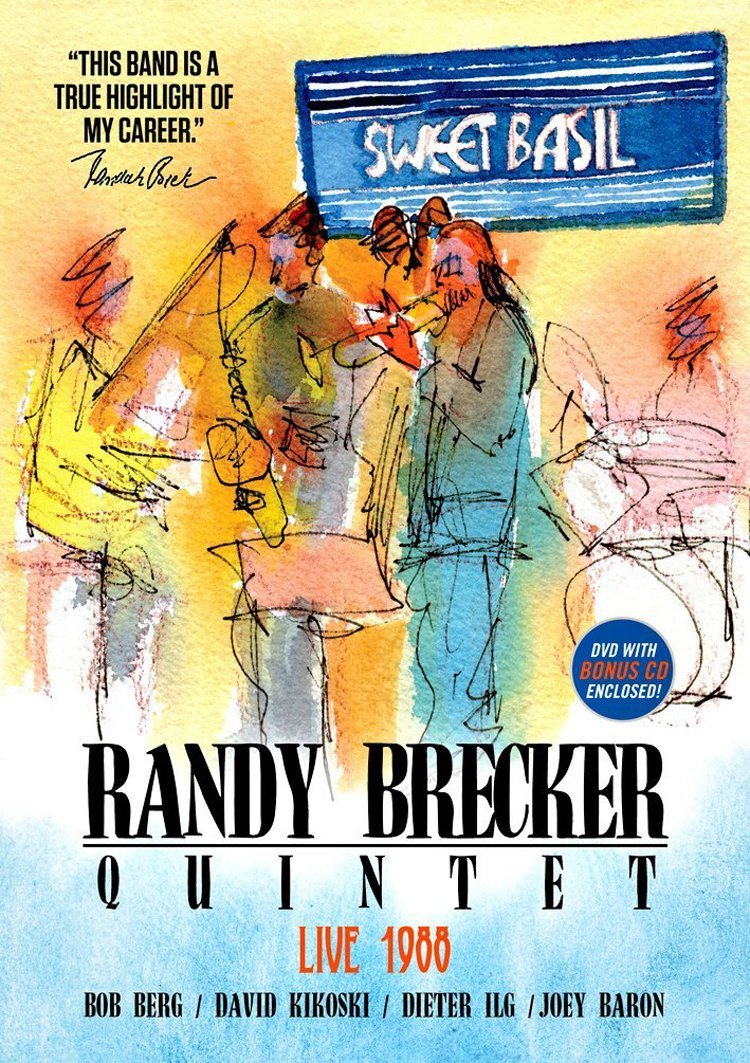 Culled from direct-to-two-track digital recordings made on three of Randy Brecker's potent six-night 1988 run at New York City's Sweet Basil, and featuring a particularly top-drawer quintet of musical friends old and new, the original 1989 LP/CD release of Live at Sweet Basil (GNP Crescendo in North America, Sonet elsewhere) has long been out of print. That the original version featured seven broad-ranging Brecker compositions, performed with fresh vitality by this group for the very first time during this Sweet Basil run, has rendered its lack of availability a wrong all the more in need of righting. Furthermore, that the recording captured 27 year-olds Dave Kikoski (piano, synth) and Dieter Ilg (double bass) and 33 year-old drummer Joey Baron alongside the 43 year-old Brecker and, retrospectively perhaps most notably, 37 year-old saxophonist Bob Berg in particularly fine form makes MVD Visual's expanded DVD/CD reissue, Live at Sweet Basil 1988, all the more worthy of celebration.

By this time, Brecker was already a music industry veteran, and not just in the jazz world. Like his younger brother, the late saxophonist Michael Brecker, in addition to a sizeable jazz discography, the innovative virtuosic trumpeter had already amassed an impressive C.V. on mega-selling records by James Taylor, James Brown, Lou Reed, Bruce Springsteen, Elton John and Steely Dan, amongst many others. It's no hyperbole to suggest that Randy Brecker may still not be a household name, but virtually anyone with access to a radio—especially in the '70s/'80s, but even today, on the multitude of "classic rock" stations—has heard him. And beyond his own work as a leader, and as co-leader of the Brecker Brothers with Michael, Brecker's early work with everyone from Horace Silver, Stanley Turrentine, Steve Khan and Grover Washington Jr. to Billy Cobham, Hubert Laws, Hal Galper and Charles Mingus, not to mention Frank Zappa, Dave Liebman and Mike Mainieri, only meant that he was, by the time of this gig, a player capable of literally anything and everything.

Berg, too, was an established player more specifically focused in the jazz world. Still, the breadth of his work, from his early days with Horace Silver, Billy Higgins, Sam Jones and Tom Harrell to the later pop/fusion of mid-'80s Miles Davis and his own emerging work as a leader on the Denon label, including 1988's particularly impressive Cycles, resulted in the saxophonist evolving into a particularly versatile player. Part of the same group of saxophonists that included, along with Michael Brecker, Dave Liebman and Steve Grossman, Berg is sometimes unfairly compared to Brecker's brother Michael, but his playing was always unmistakably his own, even if he shared a kind of post-John Coltrane sensibility with his three saxophone siblings.

If there's another live recording, in fact, that helps position this quintet to some degree (albeit from a decade earlier and each possessing their own inimitable personalities), it would be Pendulum, the 1978 live recording by Liebman, Randy Brecker, Richie Beirach, Ron McClure and Al Foster. First released as a single LP on the short-lived Artist House imprint the same year but reissued, three decades later, with an additional 150 minutes on Mosaic Select as Pendulum Live at the Village Vanguard, that group focused more decidedly on jazz and Great American Songbookstandards but was, in its own way, imbued with a similar "take no prisoners" ferocity, whether firing on all cylinders or exercising greater delicacy.

This welcome reissue of Live at Sweet Basil 1988 is particularly welcome for presenting a complete, 74-minute set on DVD for the first time (plus two additional bonus tracks, tacked onto the end), making the connection between Brecker, Berg, Kikoski, Ilg and Baron all the more palpable. Unlike the original 1989 release, this expanded version of Live at Sweet Basil 1988 is resequenced into original set list order, with the performances unedited or otherwise altered. Along with brief liner notes by Brecker, a bonus CD is also included with the entire main set but, for reasons of length, without the bonus tracks. The video (in 4:3 aspect ratio) is a tad grainy, with the entire performance a one-camera shoot with a zoom, allowing, the cameraman to move across the small stage and close in on individual soloists

At the time, Sweet Basil was one of the city's many well-known jazz venues but, renowned for its great ambient sound, was a perfect place to capture live recordings, even if the stage was so small that the quintet looks a little crammed together, with Berg and Brecker literally rubbing shoulders throughout most of the set. Still, if this quintet was already burning with fiery energy and remarkable interaction across a set covering considerable musical territory, playing so closely together onstage only made the communication shared amongst its players all the more tangible.

As might be expected, both for the time and the recording technique, Live at Sweet Basil 1988 has its flaws; this was, after all, recorded and mixed to digital two-track on the fly, and the close proximity of everyone onstage also meant that instrumental separation was impossible to achieve. Still, what it does capture, and with plenty of clarity, is the quintet's raw energy, whether on a previously unreleased standard (a brightly swinging version of Cole Porter's evergreen "Love for Sale," where Brecker's Harmon-muted horn pays tribute to Miles Davis, who'd often performed the song from the '50s through to the mid-'60s) or the more propulsive opener, "Mojoe," written by Brecker as a tribute to Joe Henderson while, at the same time, a play on words with fellow saxophone giant Sonny Rollins' often-covered "No Moe." Contrary to what some consider a recording standard, leakage is not always a bad thing, often contributing to a "fatter" sound overall. If anything, Live at Sweet Basil 1988's imperfections only makes it all the more exhilarating a listen.

Brecker and Berg may have been the established "elders" of this relatively young group, but Kikoski, Ilg and Baron were already established players. Kikoski first gained recognition playing with drum legend Roy Haynes, where Brecker heard him and recruited him for In the Idiom (Denon, 1987), which featured two tunes that would be considerably expanded upon on Live at Sweet Basil 1988 (the Latin-tinged but still characteristically Brecker-infused ""No Scratch" and more atmospheric "Moontide"). Kikoski was not only an extraordinary pianist, capable of bridging the gap between Phineas Newborn, Jr. and McCoy Tyner, but as a younger player he was clearly not averse to electric instruments, and his mix of grand piano and synth washes during his "Moontide" solo are as impressive as his synth-driven organ work on the fierce set closer, "Hurdy Gurdy," or his fourths-driven pianism on the Coltrane-esque "Ting Chang."

Brecker first heard Ilg in Europe, where the young bassist gained early exposure with saxophonist Joe Viera, but Live at Sweet Basil 1988 was the bassist's first major release, and between his earthy, in-the-gut tone, predilection for, as Brecker enthuses in his liners, "leaving 'harmonic sonic holes' for you to jump through" and already skilful ability as a soloist made this a first recording that garnered considerable notice, leading to subsequent work with everyone from Bob Brookmeyer, Marc Copland and Vince Mendoza to Nguyen Le, Charlie Mariano and Dhafer Youssef.

Baron had already managed to build up quite the resumé, playing with everyone from Carmen McRae, emerging guitar giant Bill Frisell and up-and-coming New York institution John Zorn to pianists Enrico Pieranunzi and Fred Hersch, in addition to six-string names Jim Hall and Pat Martino. Irrepressibly effervescent no matter the context and always placing the demands of the music ahead of ego-driven concerns, Baron's acute listening skills, ability to make use of every nook and cranny of his kit and effortless groove, whether on the brush-driven ballad "Incidentally," the ambling swing of "Three Voices" or slow funk of "Sleaze Factory" is emblematic of a career of ongoing diversity that would see him move on to future collaborations with artists including the late John Abercrombie, Steve Kuhn, Gary Peacock and Dave Douglas.

Listening to Live at Sweet Basil 1988 it's hard not to hear the characteristics that have rendered Brecker's writing so distinctive and so eminently identifiable, irrespective of context. The way Brecker writes, in particular, for trumpet and saxophone, and introduced with specificity during the Brecker Brothers' first run from 1975-1980 (and collected in Legacy Recordings' Complete Arista Albums Collection box set in 2012), has defined his entire career, whether it's the more generally acoustic music of Live at Sweet Basil 1988, the unmistakably New York vibe of the Brecker Brothers or on subsequent solo albums including the big band-driven Some Skunk Funk (Telarc, 2006), the Latin-esque Randy in Brasil (MAMA, 2008), or the trumpeter's imaginative reworking of a number of pop tunes with which he was associated, RandyPOP! (Piloo, 2015). Trumpet and saxophone lines seem to orbit around one another, only to merge into unison and then break off again in broader harmonies that seamlessly suggest the sound of a larger horn section.

As a soloist, Brecker is equally unmistakable, a player with tremendous chops but the intuitive knowledge of when to use them (and, just as important, when not to), and how to construct long-form solos with innate compositional and, at times, lyrical focus. Berg, too, built his career on motivic explorations, combined with an effortless ability to ratchet up the heat in a way few, barring his brethren Michael Brecker, Liebman and Grossman, could match. Even more remarkable is how Brecker and Berg's younger band mates demonstrate a maturity beyond their years. Baron's solo on "Mojoe" develops with thrillingly unpredictable inevitability; Kikoski's organ solo on "Hurdy Gurdy" is as impressive and captivating as any of the many piano solos he takes throughout Live at Sweet Basil 1988; and Ilg's feature on "Love for Sale" combines rich linearity with visceral, harmonic-driven glissandi and surprising chordal injections.

As Brecker gets ready to hit the road with guitarist Mike Stern this summer for what will likely be a more electrified context, Live at Sweet Basil 1988 couldn't come at a better time, as a reminder of just how expansive this veteran trumpeter's career has been. Featuring (and dedicated to the memory of) a saxophonist gone far too soon, and a trifecta of young but already exceptional players whose careers would take off significantly in the years that followed, the warts-and-all, "what you see (and hear) is what you get" of Live at Sweet Basil 1988 is an archival release of unfettered energy, musical depth and improvisational élan all too long in the coming, but all the more welcome for it.