Steely Dan has been more of a conceptual framework for inventive music-making than a typical rock band. Spearheaded by a pair of resourceful musical auteurs Donald Fagen and Walter Becker - they have done nothing by the books since launching Steely Dan in 1972. The band’s very name is a scatological reference from a novel by Beat Generation anti-hero William Burroughs. Though Steely Dan recorded prolifically for much of the Seventies, they toured for only a brief spell early in that decade, deciding they much preferred the studio to the road. This allowed them to craft a wry, nuanced and hyper-literate series of albums - seven in all, released from 1972 to 1980 - that are highly regarded by connoisseurs of pop hooks, jazz harmony and desiccating wit. Beneath the highly polished surface of Steely Dan’s music, astute listeners could hear a visceral love of and identification with the very soul of jazz

There's a passage in “Party Song," the concluding cut on the Stephen Philip Harvey Jazz Orchestra's debut recording, Smash! (Next Level, 2022) where the band claps hands, whoops and cheers over a syncopated praise-band saxophone riff. It's pure, unbridled joy and just like the exuberance implied by the exclamation point in the album's title, it's an ...

After last episode's extravaganza we decided to keep our focus on larger ensembles for this outing. It's a mix of historical issues (some better engineered than others) and two nearly brand-new releases. What do they have in common? Ain't none of them trios. Pop matters gets historical as we contemplate Pitchfork's deathless mediations on the “oldness" ... 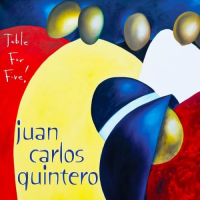 As the news gets worse, why do some kinds of music simply sound better and better? Juan Carlos Quintero's Table for Five is, by content at least, “Latin Jazz." Yet there is something for everyone, including “Alone Together," “Giant Steps" and a slightly different version (as a cha-cha-cha) of Horace Silver's Cape Verdean- inflected “Song for ...

Paul Motian Motian In Motion Aquapio Films 2021 There could have been no more apt title for film maker Michael Patrick Kelly's documentary film on drummer, Paul Motian (1931-2011), who buzzes about his New York business—in and out of taxis on the way to and from gigs or the recording studio—with ...

Adding the word “black" to a day of the week began in September 1869, after Jay Gould and James Fisk tried to corner the gold market. Prices plunged, wealthy investors lost money and the day became known in the press as Black Friday. After the stock market crashed on October 24, 1929, newspapers referred to the ...