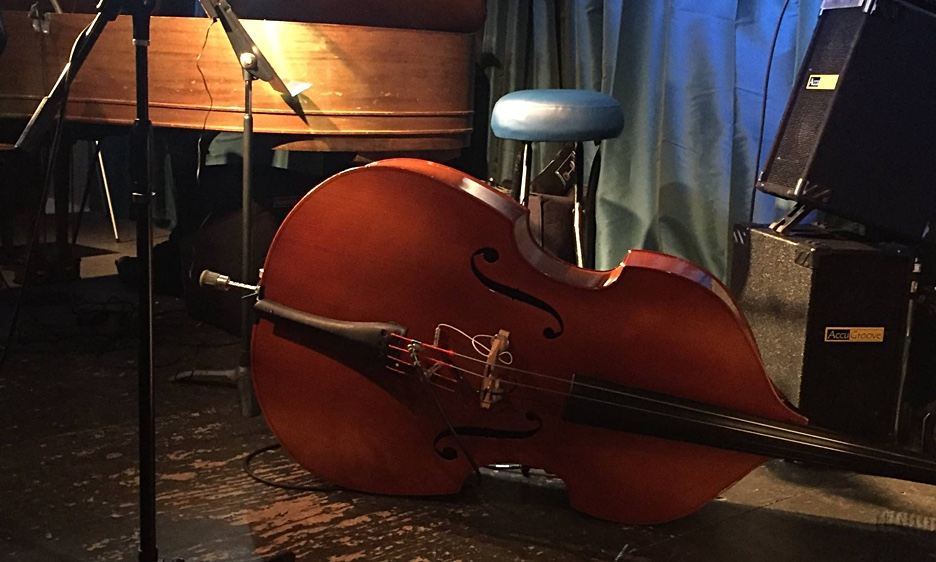 Prostate cancer affects African-American men with almost twice the frequency as other races, and is almost twice as likely to be fatal.

Jeff Chambers, long a go-to San Francisco Bay Area bassist, looked at death closely and decided it was not yet his time. In 2017 his medical chart revealed Stage IV prostate cancer, commonly and fearfully an endgame diagnosis. Prostate cancer affects African-American men with almost twice the frequency as other races, and is almost twice as likely to be fatal. Chambers had waited for two years with self-treatments before giving up, and booked himself into Tijuana, Mexico, at an "alternative" treatment center, Oasis of Hope, which uses methods not always available, or approved, for use in the United States.

He proclaims himself on the path of remission. Signs of illness which had appeared as black splotches on body scans are significantly reduced. Another scan in May was a further good progress report, followed by another course of booster treatment. He summarizes that he is still in a war, winning, but has not defeated his ailment.

Tijuana has about sixty cancer treatment centers with experimental and unorthodox methods, beyond the approval and regulation of the U.S. Food and Drug Administration and the penalties for fraud or other medical harm available in U.S. courts. Some treatments are said to work; others are unsuccessful, and patients return home broke and bereft. Websites offer possibilities, critics denounce quackery; some pioneering treatments later have been adopted in the U.S. Treatments are expensive; Chambers has a GoFundMe site to assist with his costs. But he is grateful to be playing again, an active schedule of dates around the Bay Area, hearty and invigorated.

The Passages of Masters

Chambers played on the last concert date of Thelonious Monk's saxophonist Charlie Rouse in 1988, recorded as Epistrophy on Landmark, seven weeks before Rouse would pass from lung cancer. He backed saxophonist Eddie Harris in Munich in 1995 on Harris' last studio date, Dancing by a Rainbow on Enja, before Harris would pass nineteen months later of bone cancer and kidney disease. Despite the illnesses of the headliners, these recordings show strong performances.

Nearness to a series of departures of masters from a certain golden era of jazz, one after another, brings a heightened awareness of life's transience. Chambers says most of those deceased performers never revealed the full extent of their illnesses, bringing as much energy and vitality to the end as best they could, rallying to perform even as they became otherwise diminished. What they shared, he recalls, was a commitment to the lineage, to the tradition, of the music as a living thing itself.

Chambers has long had that ethic. "Each time I picked up my instrument, I was confident that I gave my all, 110 per cent. If I can touch one person in the audience, I've done my job for the night." Similarly now, he says if he can save one life through cancer awareness, he's done that work for the evening as well. He has gone public with his own fight to raise awareness about the disease and the need for early testing and treatment. As with his music, as with the role of the human immune system, he wants to be "the messenger."

Chambers learned of his increased PSA levels in 2015 and monitored them thereafter, but through May to October in 2017 he experienced declining kidney function; a pain in his back in September 2017 and then kidney failure led to a cancer diagnosis that year. He was given weeks to live. In October 2017 he went to Tijuana, in a wheelchair, unable to walk. Within weeks, he was walking again. To supporters, and doubters about alternative treatments, Chambers says "Look at me," boldly but humbly.

The Oasis of Hope treatment for Chambers involves a three-week program of massive vitamin supplements, stimulation of the immune system, an alkaline-rich vegetable diet, raising core body temperature in a hyperbaric chamber, increasing blood oxygen including treatment of the patient's blood and re-infusing it into his bloodstream, and meditation and spiritual guidance.

Chambers has strong opinions about what causes cancer, and how conventional medicine profits from dispensing radiation and chemotherapy. His take on these moved him toward alternative treatment. A lack of access to health care and information, Chambers says, accounts for the elevated mortality of African-American men from the disease. Causation, he says, results from a cultural diet originating in what he calls "slave food, garbage food," poor quality food from which African-Americans historically made out the best as they could. Cheap, fatty or bony remainder cuts of meat; pork, smoked meats, barbecued or fried chicken; bottom-feeding fish and shellfish as catfish, crab, shrimp become the set-up for later illness.

Although he says he has been vegetarian and vegan for more than half his life, doesn't smoke or drink or use drugs, he believes the standard foods prepared during his childhood from what was available primed him for disease. Although university-educated and conservatory-trained, he says he never knew about PSA testing, an easily-available blood test that shows a propensity for prostate cancer, until his test came in high after a routine physical in his late thirties. The experience is similar, he said, for many African-American men, who learn of the test, and treatment, late.

Chambers says he models his playing after certain stylists: Jimmy Blanton, who revolutionized the bass as a melodic instrument rather than just a rhythmic timekeeping device; Rufus Reid, Oscar Pettiford, Ray Brown; and Paul Chambers and Ron Carter, each from two different periods of Miles Davis quintets. Blanton and Paul Chambers both had their careers cut short by illness. Jimmy Blanton died in 1942 at age 23, of tuberculosis, with only two years of service under Duke Ellington to leave his mark. Paul Chambers joined Miles Davis when just 20 in 1955; by 1969, Paul Chambers would also be dead of tuberculosis, only 33 years old.

Paul Chambers is popularly known for the opening duet with pianist Bill Evans for "So What" on Miles Davis' Kind of Blue album. Jeff Chambers and Paul Chambers, both bassists, are not related by blood or marriage, contrary to popular misconception. That Paul Chambers was Jeff Chambers' uncle is an incorrect jazz urban legend, although Jeff Chambers will grant that they are musically "same tree, different branches."

What Chambers emulates from these earlier masters is their intonation, timing, and sound; melodic phrasings, creative timekeeping, and exploration of the instrument's depth. References to his predecessors can be heard as he explores new territory. His playing can be most serious, and at other times playful, dancing. His tone can be deeply resonant, and then may gliss or skip to high melodic lines. A white glove on his left hand has become a bit of a trademark; he uses it to prevent moisture build-up along the back of the neck of his instrument.

The electric bass is among his tools, but he is seen most frequently with his standup acoustic bass. His facility to play both acoustic and electric bass pernits him to play across styles, including bebop, funk, Latin, blues, reggae, and fusion, but he is most at home, and his playing most distinctive, in what is sometimes called "classical bebop," or, most frequently now, mainstream.

What a Pro Does

Chambers is one of those musicians who causes one to wonder, despite the frequency of his engagements, why he is not more prominent. He did have an almost 20-year run, from 1987 to 2006, of high visibility, playing and touring with name musicians: Eddie Harris, Les McCann, Freddie Hubbard, Joe Henderson, Ravi Coltrane, and many more. That emboldened him to move to New York, from 2006 to 2008, unfortunately, he says, the same years in which the city became flooded with graduates pumped out from an abundance of new academic jazz programs.

He was already turning 50, and, talent notwithstanding, was a generation past the new faces just coming alive. New York became ever more competitive: "The number of gigs hadn't increased, just the population of musicians," and hungry youngsters were willing to work for "pizza and beer." Chambers was long past toiling for free, and admits the New York experiment didn't work out for him. But he also explains that he had never set being a headliner as his goal; from his years in groups, he had long seen the burdens upon a leader.

Instead, he decided to be the best sideman anyone could hire, and continued to build a career that way. It is in that role that his accompaniment work is distinctive now. In a support position, he can set directions, and be right there to reel things back if a performance, or performer, loses focus or direction. Matter-of-factly, he states "That's what a pro does."

Chambers began his career in Milwaukee on the electric bass, playing in churches and garages and Top 40 bands. He studied at the Wisconsin Conservatory of Music where he first began to play acoustic bass, under the instruction of guitarist Manty Ellis, and won intercollegiate competition awards in 1976 and 1977. For Chambers, the chance to play full time with pianist and vibraphonist Buddy Montgomery offered an invaluable education and a quick entrance into the international world of jazz. In 1978, he left the Conservatory and entered the "University of Buddy Montgomery," with extensive touring.

Over the years he has returned to academia, however, teaching at the Brubeck Institute of the University of the Pacific, San Francisco and Fresno State Universities and Dominican University; the Berkeley, California, High School program which graduated Joshua Redman and Benny Green; and the greater Bay Area public school system.

Most frequently now he pairs with pianist Larry Vuckovich to illuminate the Great American Songbook across idioms: shifting standards to Latin rhythms with drummer John Santos; slowing the tempo way down for a sultry version of "Just in Time" for vocalist Jackie Ryan; in another iteration, building a trio with guitarist Kai Lyons in place of drums, an earlier format used by Nat "King" Cole, Art Tatum, Ahmad Jamal, and Wynton Kelly with Kenny Burrell. In June, he duets with guitarist Calvin Keys at the Healdsburg Jazz Festival. Another project, a tribute band "Knucklebean," re-unites personnel who had played with drummer and composer Eddie Marshall.