Ira Gershwin was born in New York City, the son of a Russian Jewish immigrant, on December 6, 1896. The older brother of George Gershwin, he attended Townsend Harris High School in New York City where one of his closest friends and fellow students was E.Y. “Yip” Harburg. The two worked together writing lyrics and Ira started his career in 1918 under the pen name of Arthur Francis. It was not until 1924 that Ira and George began a collaboration that would prove one of the most successful and prolific in history.

In 1931, the two brothers headed to Hollywood producing a score for Fox Studios, Delicious, starring Janet Gaynor. They returned to New York again working on Broadway producing Pardon My English (1933, including "Isn't It A Pity" and "Lorelei") and Let 'Em Eat Cake (1933, including “Mine”).

. In 1935, Ira, in collaboration with Dubose Heyward, wrote the words to George Gershwin's music for Porgy and Bess, a work that straddles the world of opera and Broadway and includes such classic songs as "Summertime", "Bess, You Is My Woman Now", "It Ain’t Neccessarily So" and "I Got Plenty O' Nuthin"'. Many consider it the greatest American opera written to date.

In 1937, Ira and George accepted a contract from RKO and headed back to Hollywood. Among the movies they wrote scores for were Shall We Dance (1937, which included such classic songs as "They All Laughed", "Let's Call the Whole Thing Off', and "They Can't Take That Away From Me"), A Damsel in Distress (1937, included "Things Are Looking Up", "A Foggy Day", "Nice Work If You Can Get It", and "I Can't Be Bothered Now").

While working on the score for the Goldwyn Follies of 1938, George Gershwin died from an inoperable Brain Tumor. Ira never got over the loss of his brother and he is said to have never again believed in God. The score they were in the midst of produced such incredible standards as "Love Walked In" and "Love Is Here To Stay".

After George's premature death, Ira Gershwin continued to be active as a lyricist, creating classic songs with many of best composers of the day, including Kurt Weill ("The Saga of Jenny" from Lady in the Dark., 1941), Jerome Kern, “Long Ago and Far Away" from Cover Girl, 1944), and Harold Arlen ("The Man That Got Away" from A Star is Bom, 1954).

Ira retired at the age 58. In 1964, Ira added lyrics to three of his brother George's unfinished works. Ira Gershwin died in Beverly Hills, California on August 17, 1983. On Dec. 6, 1996, Ira was the first lyricist to be honored by a special tribute performance on the centennial observance of his birth, in New York's Carnegie Hall. Show less 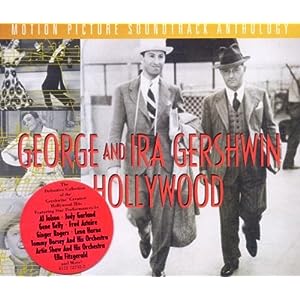 All About Jazz musician pages are maintained by musicians, publicists and trusted members like you. Interested? Tell us why you would like to improve the Ira Gershwin musician page.