Sammy Cahn was nominated for more than 30 Oscars, and won four times. His songs were recorded by virtually every major singer. And he wrote some of the best known of all popular songs.

He was born Samuel Cohen in New York on June 18, 1913 into a family of Jewish immigrants from Polish Galicia, and spent his childhood on the Lower East Side. He attended Seward Park High School. Early on, he learned to play the violin, and from the time he was fourteen he played in local Bar Mitzvah bands. While still in his teens, he played the violin in pit bands of burlesque houses. He became friendly with fellow band-member, pianist Saul Chaplin, and they began writing songs together. At first they wrote specialty numbers for vaudeville acts. Then, in 1935 they wrote "Rhythm Is Our Business" for the Jimmy Lunceford Band. Lunceford recorded it, and it became the Lunceford Band's theme song. In 1936 they had another success with "Until The Real Thing Comes Along".

In 1937, they adapted "Bei Mir Bist Du Shon", which they mistakenly believed to be a Yiddish folk song- -it was actually a modern Yiddish theater song by Sholom Secunda--into English for the then- unknown Andrews Sisters. The Andrews Sisters had a huge hit with the song, and Cahn and Chaplin were on their way.

With music by Nicholas Brodzsky, Cahn wrote Mario Lanza's first hit "Be My Love"(1950). Working again with Jules Styne, Cahn won an Oscar for the title song of the 1954 film Three Coins in the Fountain.

Sammy Cahn had been friendly with Frank Sinatra from Sinatra's early days with Tommy Dorsey, and many of his songs had been written for Sinatra's movies. In 1955, Sinatra introduced Cahn to composer Jimmy Van Heusen, beginning Cahn's last major collaboration. They wrote the title song for the 1955 Sinatra film The Tender Trap. Also in 1955, Cahn and Van Heusen wrote a TV musical version of Our Town, which starred Sinatra, Paul Newman, and Eva Marie Saint. It included "Love And Marriage".

In 1957, Cahn and Van Heusen wrote "All The Way" for the Sinatra film The Joker Is Wild. It won Cahn his second Oscar.

In 1959 came Sinatra's film A Hole in the Head, for which they wrote "High Hopes". The song won Cahn his third Oscar, and later (with a revised lyric) became John F. Kennedy's campaign song.

In 1960, Sinatra recorded "The Second Time Around". Cahn won his fourth Oscar, and Van Heusen his third, in 1963 for "Call Me Irresponsible", from Papa's Delicate Condition.

They wrote "My Kind Of Town" for Sinatra's 1964 film Robin and the Seven Hoods. In 1965 Cahn and Van Heusen tried their hands at Broadway with the musical Skyscraper. The show was not a success, but it included "I'll Only Miss Her When I Think Of Her".

Cahn long association with Frank Sinatra led to Sinatra's recording 89 of Cahn's songs, many of them more than once.

In 1974, Cahn did a one-man show on Broadway called Words and Music. He performed it again on tour numerous times in the years that followed. 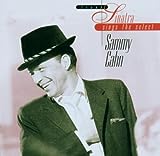 All About Jazz musician pages are maintained by musicians, publicists and trusted members like you. Interested? Tell us why you would like to improve the Sammy Cahn musician page.