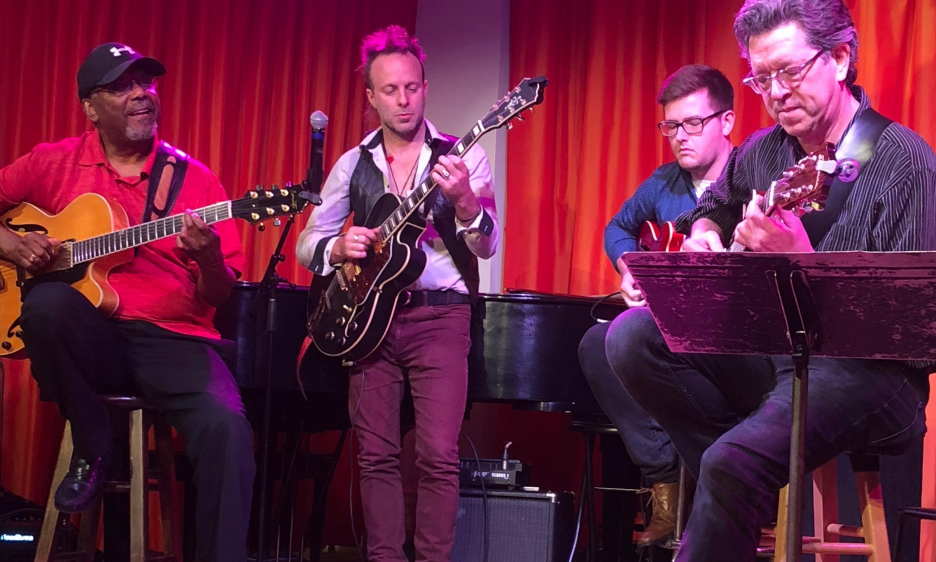 By Mackenzie Horne
May 31, 2019
Sign in to view read count
For countless bluesmen, rockers, and bossa players, the guitar is the path to jazz; that trail was blazed as early as the 1920s by practitioners such as Eddie Durham, Eddie Lang, Django Reinhardt, and Charlie Christian. For Pittsburgh guitarist Mark Strickland, it was Kenny Burrell's Midnight Blue (Blue Note, 1963) that first sparked his interest in the genre. George Benson, another Pittsburgh musician, has served as the unofficial jazz ambassador to pop for five decades. Nearly a century after the guitar's introduction to the jazz vocabulary, the Pittsburgh jazz community celebrated its legacy.

Pittsburgh has produced some of the finest jazz artists in the world; the shortlist includes Art Blakey, Roy Eldridge, Ray Brown, Mary Lou Williams, and Geri Allen. The city has also yielded an abundance of high-caliber guitarists, including Benson, Jimmy Ponder, and Joe Negri. As a part of Alphabet City's Off-Minor Series, the venue hosted a concert titled "Four on Six" on May 19, 2019. It was an event devoted to the acknowledgement of the Pittsburgh guitar tradition and a celebration of everything the instrument can be in jazz. The title of the concert is derived from the Wes Montgomery tune of the same name—a reference to four fingers on six strings.

It was an evening of pushing the boundaries of music and musicians. Drummer Thomas Wendt has spearheaded the informal campaign to cross generational divides with this music for years; as the result of his efforts, Four on Six featured three generations of Pittsburgh guitarists. Eric Susoeff, Mark Strickland, and John Shannon each played a three-song set and young Greg Jones was invited to perform with the three elder statesmen for the last two tunes of the night. Wendt and bassist Tony DePaolis spent the evening rolling with the knockout punches delivered by three intensely different guitarists.

The first guitarist featured that evening was California-born and Pittsburgh-raised Eric Susoeff. Susoeff moved to Pittsburgh in the 1960s and promptly created Salsamba Latin Jazz Group, an ensemble devoted to the performance of Latin American music. He is a musician who is acutely aware of the reciprocal relationship between bossa and jazz. Alongside Wendt and DePaolis, Susoeff has supported Brazilian singer Kenia and the guitarist wrote the title track for Kenia's 2016 album On We Go (Mooka Records, 2016). Suseoff is a consistently effective composer and he has musical literacy to make those original compositions sound as if they've been plucked directly off of the 1969 Brazilian top-40 chart. His May 19 set included two original tunes and by the time the trio reached Suesoff's third selection, "Without a Song," Wendt and DePaolis were firing on all cylinders, pursuing the choruses with aggressive excitement.

There was a brief moment of transition as Susoeff trotted off-stage; the bandstand was littered with gleaming hollow-body guitars. Microphone in hand, Wendt introduced Mark Strickland. "When you play music," the drummer began, "your personality comes out. Mark is one of the best people and that comes through." Strickland took the stage with an inexhaustible smile; playing trio with Wendt and DePaolis is something that occupies a warm place in the guitarist's heart and he's never been slow to admit it.

Strickland, an endearing elder figure in the local scene, has taught and performed on an incredibly high-level for decades... and he has always done so with a distinct brand of humor. "I remember George Benson hanging around in the North Shore," he recalled. "Everyone speaks this language, but everyone has their own dialect. I've got a little North Shore in me." Strickland launched into a 12-bar blues and the beauty of the hometown scene immediately revealed itself; the three musicians exchanged familiar dialogue, conversations erupting from their respective instruments. "It's nice to be playing with such great musicians," said Strickland, gesturing to DePaolis and Wendt. "Musicians can be so competitive. Every time George Benson would show up at the club, I'd throw my guitar in the case and slide it under the table because I knew he was out for blood!"

John Shannon followed suit; a generation younger than Susoeff and Strickland, Shannon studied with fellow Pittsburghers Dwayne Dolphin and Eric Kloss as a young man. Shannon is that rare musician who can play any genre at the turn of the beat and sound phenomenal doing it. The trio began with a Shannon original titled, "Fresh Water Prayer." The clean, airy tune sounded like some forgotten take from Pat Metheny's Bright Size Life (ECM, 1976). DePaolis and Shannon always push one another when they share the stage; Shannon is a big believer is testing the limitations of genre and DePaolis, who is no stranger to defying musical expectations, responds to the guitarist exceptionally well. While they appear together often, the Shannon/Wendt combination is a rarer; Wendt followed Shannon's lead, playing his most creatively on the trio's rendition of McCoy Tyner's "Passion Dance." Shannon closed his set with Billy Strayhorn's "Isfahan," a tasteful recognition of Pittsburgh jazz as it was and Pittsburgh jazz as it is.

Wendt, DePaolis, and Shannon recalled Susseoff and Strickland to the stage before inviting guitarist Greg Jones to the bandstand. Jones, a generation younger than Shannon, stood among his teachers and colleagues as the ensemble rounded off the concert with Wes Montgomery's "Four on Six" and Kenny Burrell's "Chitlins con Carne." At the end of it all, three generations of guitarists stood shoulder-to-shoulder in front of Alphabet City's signature red curtain. Those four players demonstrated the transformative capacities of their instruments before a transfixed crowd, aided by two of the finest rhythm section players in the Steel City. Four on Six was not only an enjoyable display of creativity and talent, but more importantly, it was a nod to the tradition that lives and breathes by cross-generational collaboration.