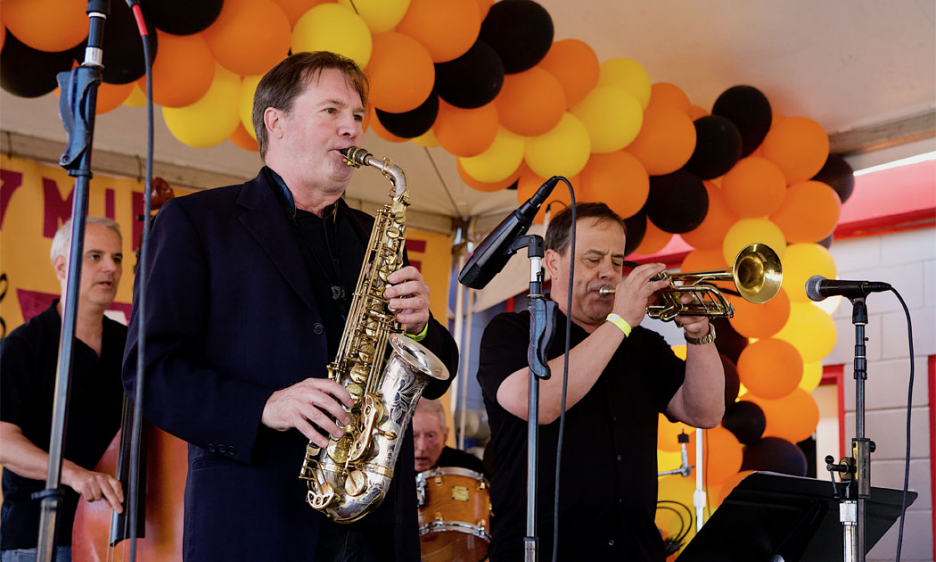 The great cultural and ethnic diversity of the Bay Area is definitely on display at these festivals. The attendees were definitely witness to the art form presented at its best. We rarely get to see each other perform, as most of us have to travel fairly wide to spread the art to the many supporters and fans.
&#151Dennis Smith Bassist, Five Ten

Last year's inaugural 7 Mile House Jazz Festival started by 7 Mile House owner Vanessa Garcia, proved so successful, the second edition returned in an expanded format. The 7 Mile House Jazz Festival 2019 was figuratively and literally bigger this year, relocating to an open auto garage space conveniently located next door. The garage owner, and Garcia's ex, completely removed all the vehicles, and cleaned it up to make room for the generous stage and seating area. Now that's a good neighbor!

Brisbane CA's favorite dog friendly family restaurant and music venue continued to showcase some of the San Francisco Bay Area's superb musical artistry. This year's festival kicked off on a considerably larger stage under a huge white tent. Colorful strings of balloons formed a festive frame around the expansive bandstand. The deep line up included in order of appearance: the Charles McNeal Quartet, Hristo Vitchev Organ Trio, Andrew Speight's Best Bop, John Worley and Mochi, Five Ten, Madeline Eastman and Keith Saunders Trio, the Cabanijazz Project, Charged Particles with Tod Dickow, Fred Randolph Quintet, and closed with the Rhonda Benin Jazz & Blues Experience. San Mateo's KCSM Jazz 91 morning personality Lisa Clancy, along with other station DJs Leslie Stoval,Chris Cortez and Dick Conte, introduced the artists throughout the bustling day. Once on stage, Clancy implored McNeal to move back to the Bay Area because, "We miss you." The saxophonist explained he moved to Las Vegas because his wife had the better job. Saturday started warm and overcast, but cleared up to reveal a warm sunny day accompanied by a stiff blustery breeze.

The festival opened up with the exciting Charles McNeal Quartet which consisted of: saxophonist McNeal, pianist Joe Warner, bassist Gary Brown, and drummer Rob Rhodes. Early attendees were treated to an invigorating set that included Wes Montgomery's distinctive "Road Song." After the first set, the Hristo Vitchev Trio rolled along and included tasty guitar solos eliciting applause from the growing audience. This energetic set included the nostalgic "I'll be Seeing You." Led by Vitchev, the trio was: Vitchev, guitar; Brian Ho, B3 organ and Mike Shannon, drums. Bay Area musician Larry Vuckovich arrived early to enjoy the rousing afternoon sounds. Before the next artists took the stage, a genuinely surprised Alicia Clancy received The Jazz Promoter award presented by Harris.

One of the many highlights was the Andrew Spieght Quintet's Best Bop with: saxophonist Speight; pianist Matt Clark; bassist Michael Zisman and drummer Austin Harris. Spieght opened with work associated with Cannonball Adderley and Nat Adderley. The group delivered on Sam Jones' 1962 upbeat ditty "Unit 7" popularized by Adderley, along with Charlie Parker's lush track "Diverse." This was followed by Dizzy Gillespie's jazz milestone "A Night in Tunisia." After the patrons responded with abundant clapping, they moved on to Fred Lacy's 1963 composition "Theme for Ernie," originally recorded by John Coltrane in 1958. Spieght closed with the "Rhythm —a-ning," composed and recorded by the iconic Thelonious Monk in 1957. The Spieght Quintet's remarkable tribute session to the creators of Bebop was soaked in applause from the appreciative house.

After the Andrew Spieght Quintet finished, it was time for another award presentation. Pianist Vuckovich was honored with Outstanding Jazz Musician for his life time of work. Always the busy musician, he drove down from his home in Healdsburg CA (Wine Country) for a Friday gig. He graciously accepted the well deserved award and gleefully acknowledged the recognition.

Next up was John Worley and Mochi with: Worley, trumpet and flugelhorn; Amy Dabalos, vocals; Sebastien Lanson, guitar; Ken Okada, bass and Wally Schnalle on drums.  Worley, a huge fan of influential composer/bassist Stanley Clarke, opened with Clarke's "Why Wait" which he also recorded on his 2005 debut album "Worlview." Their set list covered the Miles Davis 1963 standard "Seven Steps to Heaven." Worley jokingly said he was, "the farthest away from heaven but in a good way." The Stanford music department lecturer also commented on the Spieght Quintet's previous set calling it, "burning bop."

Although it was sunny, the afternoon breeze continued to carry a good bite. Another high point in the packed day was Steve Carter and Five Ten's infectious set. Their steel drums and percussive rhythms brought up images of Weather Report's "Black Market." Five Ten had the house on its collective feet with their world music beat and vitality, and they gladly responded to the venue's feedback. The band included: Jeff Narell, steel pans; Steve Carter, keyboards; Dennis Smith, bass; Billy Johnson, drums and Marquinho Brasil, percussion.

Later, bassist Smith shared his thoughts on this year's festival. "It was a pleasure and honor to be invited to participate in this year's festival. This festival included an impressive array of some of the top musicians in the greater SF Bay Area. This area [San Francisco Bay Area] is so rich with fantastic musical artists. The great cultural and ethnic diversity of the Bay Area is definitely on display at these festivals. The attendees were definitely witness to the art form presented at its best. It is always such a great opportunity to connect with other musicians in the area. We rarely get to see each other perform as most of us have to travel fairly wide to spread the art to the many supporters and fans. These festivals are perfect for seeing other cats that we either haven't seen or haven't played with in a while. We definitely appreciate and applaud Jon and Vanessa for pulling this all together. Happy the weather cooperated also."

"We, Five Ten, always appreciate the opportunity to share the love we have for our audiences and to take them on a musical journey unlike most experiences. Our music draws its influences from much of the world including Brazilian, Caribbean and West African and is heavily rooted in the gritty, funk-soul of the East Bay. We like to think that our music takes our audiences on an inner exploration of their soul as it conjures visions of the greater world around us. That is the beauty of the music called Jazz in its many manifestations."

In between bands, this photojournalist took advantage of the close proximity to the 7 Mile House's multiple big screen TVs for quick dashes to catch snippets of the NBA semi finals. Late in the fourth quarter, the Golden State Warriors were playing the Houston Rockets, their western conference rivals. Unfortunately, the cold shooting Oaktown team fell to the hot Rockets in overtime. However, their crest fallen fans could console themselves with tomorrow's major Cinco de Mayo celebrations throughout the Bay Area.

Entertaining vocalist Madeline Eastman with the Keith Saunders Trio played next with: Eastman, vocals; Keith Saunders, piano and Vince Lateano, drums. Eastman provided some fun stories about her North Beach neighborhood where, "clothing was optional." At this time, the staff turned on the tent lighting and slowly changing stage lighting came into play. This effect echoed the halcyon days of 1960s San Francisco's light shows. Early evening also brought out the heat lamps that were strategically placed around the spacious tent.

Next up was The Cabanijazz Project. One of the band members mentioned he was a former Brisbane resident for a year and a half. He enjoyed playing local gigs, including the historic 7MH. The Project's last song had folks dancing to their rhythms. The Cabanijazz Project featured: Javier Cabanillas band leader, composer and congas; Jamie Dubberly, trombone; Ben Torres, tenor saxophone; Galen Green, baritone saxophone; Julio de la Cruz, keyboards and Kevin Silveira, bass.

Charged Particles and Tod Dickow focused on the music of the celebrated Chick Corea. The Corea supporters were not disappointed by their lively set. The lineup was: Dickow, tenor saxophone; Murray Low, keyboards; Aaron Germain, basses and Jon Krosnick, drums (7MHJF music director).

Well into the fantastic evening, the Fred Randolph Quintet succeeded Charged Particles. During their time on stage, the quintet performed "Spirits" and Randolph switched from the acoustic bass to electric, then back to his acoustic. The band's solos garnered good responses from the outgoing supporters. They were: Fred Randolph, basses; Erik Jekabson, trumpet; Sheldon Brown, saxophones, flute; Dan Zemelman, keyboards and Greg Wyser-Pratte, drums.

The brisk wind gave way to a calmer breeze later afternoon and evening. Rhonda Benin Jazz & Blues Experience closed a fine Northern California day overflowing with great music. Late in the evening, the die hard supporters were treated to Benin's soulful vocals and saucy story telling. The Experience was: Benin, vocals; Tammy Hall, piano; Ron Belcher, bass; Geechi Taylor, trumpet and Leon Joyce Jr., drums. It seemed only fitting that alto saxophonist McNeal, who opened the day with his quintet, was playing with Benin to close out a sensational day of music, food and fun. Today's musical circle was complete. There were more than few admirers remaining from the 12:45 pm start. One very vocal gentleman on his way out commented, "This was the greatest one ever."

In closing, owner Garcia shared her feelings on the 7MHJF 2019. "One of the most memorable moments at our 7 Mile Jazz Fest was the amount of people thanking me for hosting an incredible show. Our guests overwhelmingly enjoyed the incredible talent, the intimate outdoor setting and not to mention our food. Most could not believe the transformation from auto shop to music venue, conveniently located next door to 7 Mile House. It was not an easy task. In fact, I told myself I probably wouldn't attempt to use the shop again. But after I saw the finished product and received so much praise from everyone who came, including my staff, who were so excited about it all, I just have to do it here again!"

Music fans everywhere hope you, "do it here again." They will be looking forward to attending the 7 Mile House Jazz Festival 2020, and witnessing first hand the continuation of this enjoyable new Bay Area tradition.