A talented and versatile bassist, Jeff Chambers is known for his impeccable timing, dynamic rhythms and improvisational dexterity. Chambers musical style is both lyrical and playful. With his distinct touch, smooth sound and innovative sensibility he travels the vast tradition of rhythm-fueled bass playing, skillfully referencing his predecessors while exploring new musical territory.

Chambers facility to play both acoustic and electric bass allows him to express himself fluidly in a variety of idioms, including Bebop, Funk, Latin, Blues, Reggae and Fusion. In any genre, Jeff chambers is an improvisational master. "When I am playing music I have one destination, but many routes. It doesn't matter which one I choose; there are many ways to go. The musicians are listening to one another. I can walk with them; then I can venture off, saying am going this way. I'll meet you down the path. Sometimes one is a leader, then another. We switch up. The path is clearer if I close my eyes. I don't have to see the path; I just have to hear the path."

Chambers began his career in Milwaukee on the electric bass with the renowned pianist and vibraphonist Buddy Montgomery. He studied at the Wisconsin Conservatory of Music where he first began to play acoustic bass. His combo, #8, won first place in the College Division Awards in 1976, and the next year at the University at Notre Dame. But for Chambers, the chance to play full time with Buddy Montgomery offered an invaluable education and a quick entrance into the international world of jazz.

In 1978, he left the Conservatory and entered the University of Buddy Montgomery, touring extensively with the master. Since then, Chambers has toured all over the United States, Canada, Central and South America, Europe, Russia, Australia and Japan, performing with many of the world's most prominent jazz musicians.

Chambers has also worked in video and film. He appeared in M.C. Hammer's video, Here Comes the Hammer, 1991; performed All the Way with Jeffrey Osborne in the soundtrack for the film, Dying Young, 1991; appeared in Whoopi Goldberg's Sister Act, 1991; performed with Keanu Reeves in Sweet November, 2001; and is featured on a Delta Dental television commercial. 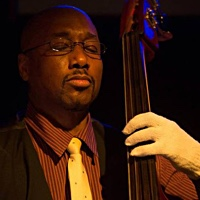 All About Jazz musician pages are maintained by musicians, publicists and trusted members like you. Interested? Tell us why you would like to improve the Jeff Chambers musician page.