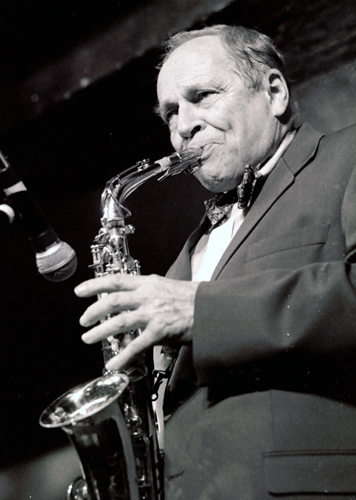 Some of us are old enough to remember when Sir John Dankworth was simply Johnny Dankworth, and quite simply one of the finest jazz musicians Great Britain has ever produced. Johnny became Sir John in 2006 when he was knighted by Queen Elizabeth, nine years after his wife, the marvelous singer Cleo Laine, was made a Dame of the British Empire.

As befits a Knight of the Realm, Dankworth, who died February 6 at age 82, wore many hats during his long and illustrious career: accomplished saxophonist, bandleader, composer, educator, goodwill ambassador, philanthropist and Laine's music director since 1971. As a writer for films and television, he was widely known for his themes for The Avengers, Danger Man, Tomorrow's World, Saturday Night and Sunday Morning, Darling and Modesty Blaise, among others. In 1969, he and Laine founded the Wavendon Allmusic Plan and a theatre, The Stables, at Wavendon in Buckinghamshire, whose 300-seat concert hall serves as a proving ground for young musicians and a venue for promoting jazz. In 1985, Dankworth founded the London Symphony Orchestra's Summer Pops program, and eight years later formed the Dankworth Generation Band with his son, the bassist Alec Dankworth. A daughter, Jacqui, followed in her mother's footsteps and is a well-known jazz singer.

Born in 1927, Dankworth was raised in Walthamstow in outer London, where he began his musical journey by studying piano and violin before switching to clarinet, a change influenced by his exposure to the music of Benny Goodman. Before entering the Royal Academy of Music, Dankworth moved from clarinet to saxophone, settling on alto after hearing the great Charlie Parker. Following service in World War II (1943-47), Dankworth and his friend Ronnie Scott joined Geraldo's Navy, a band that traveled between Britain and the U.S. on the Cunard fleet of luxury liners. After working with Bert Ambrose's band and the Skyrockets, Dankworth, named Musician of the Year in 1949 by readers of Melody Maker magazine, formed the Johnny Dankworth Seven, a co-op group based loosely on the music of the trailblazing Miles Davis band. Members of the Seven included trumpeter Jimmy Deuchar, tenor saxophonist Don Rendell, trombonist Eddie Harvey, pianist Bill Le Sage and drummer Tony Kinsey.

In July 1953, Dankworth formed his first big band, which lasted until 1964. Laine, who joined the Dankworth Seven as vocalist in 1951 and was married to Dankworth seven years later, continued as the band's featured singer. By the mid-1960s she had become a soloist in her own right, and Dankworth devoted much of his time after the early 1970s to serving as her music director and as a composer of music for film and television. Although in failing health for several months, he was to have performed at a concert at The Stables on February 6 2010. Instead, Dame Cleo announced from the stage that he had passed away that day. He leaves a remarkable legacy that endures owing to his devotion to jazz and to the many younger musicians who have benefited, and will continue to do so, from his singular generosity and counsel.

New York-based trumpeter Scott Wendholt, a mainstay with the Vanguard Jazz Orchestra, the John Fedchock, Toshiko Akiyoshi and Bob Mintzer big bands and assorted other groups in and around the Big Apple, was in Albuquerque from February 18-20 to take part in the annual Albuquerque Jazz Festival, an event that focuses for the most part on local high school and middle school ensembles. The marquee event on Saturday evening was a concert performance at Eldorado High School with the Albuquerque Jazz Orchestra under director / trumpeter Bobby Shew. The AJO opened the show with "Do It Again," arranged by Fred Sturm, the classic Tom Kubis arrangement of "When You're Smiling" and Duke Ellington's fleet-footed "Cottontail" before inviting Wendholt onstage to perform a pair of his compositions, "Times Line" and "Beyond Thursday," followed by Thelonious Monk's "'Round Midnight" and, saving the best for last, a spirited duel with Shew on Clifford Brown's buoyant "Joy Spring."


After an intermission, the AJO delved into a pair of tantalizing charts by Sturm, "The Goodbye Look" and Australian-inspired "Didgeridoo," before Wendholt and the ensemble wrapped things up with the trumpeter's "Her Allure," the well-named "Abstraktes Bild," Johnny Green's classic "Body and Soul" and Wayne Shorter's free-flowing "Black Nile." Besides Wendholt and Shew, the evening's admirable soloists included tenor saxophonist Lee Taylor, trombonist Ben Finberg and pianist Chris Ishee. Bassist Maren Hatch and drummer Chase Ellison provided a durable foundation for their improvisations. A delightful concert from beginning to end.

A day-long memorial service and celebration of the life of trumpeter Stacy Rowles, who died October 27 2009 at age 54 from injuries sustained in an auto accident a month earlier, was held January 10 in the recently remodeled auditorium at the Musicians Union in Hollywood, California. A number of groups and musicians performed including several with whom Rowles had played including The Peak Experience, led by bassist Mike Peak; the Jazz Birds, a quintet formed by Rowles and the late multi-instrumentalist Betty OHara in the 1980s; and saxophonist Ann Patterson's superb big band, Maiden Voyage. The attendance was large, the sentiments heartfelt, the result a wonderful tribute to a brilliant and well-loved musician.

Howard Fischer, an attorney who founded the New York Jazz Museum in 1972, is producing and directing a new film, They Died Before 40, designed to examine and shed light on the early deaths of such jazz luminaries as Charlie Parker, Herschel Evans, Charlie Christian, Fats Waller, Jimmy Blanton, Bunny Berigan, Clifford Brown, Chick Webb, Chu Berry and more. "Through archival film footage, photographs, reminiscences and expert discourse," Fischer writes, the film will delve into the lives of these musicians, "develop an appreciation of their artistry and reveal how and why their careers were cut short." Dan Morgenstern, director of the Institute of Jazz Studies at Rutgers University and a renowned jazz historian, author, editor and archivist, is to serve as a consultant for the film that will also examine the lives and careers of Bix Beiderbecke, Fats Navarro, Oscar Pettiford, Eric Dolphy, Paul Chambers, Serge Chaloff, Sonny Berman, Frank Teschemacher, Lee Morgan and about a dozen others. Film footage, photographs and documents are being sought along with reminiscences from friends, family members, musicians and others who knew any of those to be profiled. Contact Howard Fischer by phone at 212-579-0689 or by e-mail, [email protected]

And that's it for now. Until next time, keep swingin'!