Teddy Charles, along with Milt Jackson and Terry Gibbs, extended the legacies of Lionel Hampton and Red Norvo and established the gold standard for modern jazz vibraphonists. Charles was also an innovative composer and arranger whose recordings were some of the most forward looking and highly regarded of the 1950s, especially his Tentet sessions for the Atlantic label in 1956. His versatility is demonstrated by the broad spectrum of musicians with whom he worked during his career ranging from jazz luminaries such as Charles Mingus, Miles Davis, and Gunther Schuller to rhythm and blues stars including Aretha Franklin, Chuck Willis, and Earl Bostic

This show has a wide variety of classic and contemporary modern jazz, touching on Charlie Parker, Ed Neumeister, Uri Caine, Matt Ulery, and Lee Konitz among others. Playlist Henry Threadgill Sextett “I Can't' Wait Till I Get Home" from The Complete Novus & Columbia Recordings of Henry Threadgill & Air (Mosaic) 00:00 Phronesis “Breathless" ... 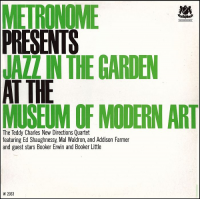 Teddy Charles was a heavy hitter. A vibraphonist, composer, arranger and a producer, Teddy could swing as easily as he could explore modal territory with his groups. When I started this blog back in 2007, there were a number of musicians I wanted to interview first. Among them were Danny Bank, Hal McKusick, Sol Schlinger and ...

Woody Herman disbanded the Second Herd in 1949 and, while Stan Kenton and Duke Ellington managed to keep a big band on the road through the 1950s, Count Basie disbanded his band at the start of the decade but assembled a new one in a few years. Generally this was a tough period for large ensembles. ...