Teddy Charles, along with Milt Jackson and Terry Gibbs, extended the legacies of Lionel Hampton and Red Norvo and established the gold standard for modern jazz vibraphonists. Charles was also an innovative composer and arranger whose recordings were some of the most forward looking and highly regarded of the 1950s, especially his Tentet sessions for the Atlantic label in 1956.

His versatility is demonstrated by the broad spectrum of musicians with whom he worked during his career ranging from jazz luminaries such as Charles Mingus, Miles Davis, and Gunther Schuller to rhythm and blues stars including Aretha Franklin, Chuck Willis, and Earl Bostic. Although I have been unable to obtain session details for the discography, Charles recalls doing many recording dates with pop, soul and rock artists including Bobby Vinton, Dion and the Belmonts, Paul Revere and the Raiders, Paul Simon, Diahann Carroll, Betty Barney and organist Ethel Smith.

In the 1960s, Charles returned to his other passion in life, sailing. For years, he was occupied with the maintenance and operation of the Mary E, an historic 72-foot clipper schooner built in 1906. He sold that vessel recently (January 2007) and conducted tours of the Peconic Bay estuary on the historic skipjack Pilgrim.

On April 23, 2003, Charles performed in a trio setting with clarinetist Perry Robinson and bassist Ed Schuller at the Cornelia Street Cafe in New York City. Robinson and Charles had never worked together before this event. It was fascinating to hear the interactions between the unabashedly "outside" clarinetist and the more controlled but still adventurous Charles.

Charles appeared as a special guest with the Chris Byars Quartet at Smalls Jazz Club in New York City on October 12 & 13, 2007. Performing some of Charles's own compositions, the ensemble included John Mosca on trombone, Ari Roland on bass and Stefan Schatz on drums with Chris Byars on alto, tenor and soprano saxophones and flute.

Announcing the Winners of the Smalls Records 5 CD Giveaway! 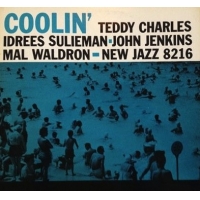 All About Jazz musician pages are maintained by musicians, publicists and trusted members like you. Interested? Tell us why you would like to improve the Teddy Charles musician page.