The son of a musician, Scott became a saxophonist in his teens. Eventually, as the owner of the UK's most famous jazz club, his name was virtually synonymous with jazz in the country. Working on the Atlantic oceanliners in the late 1940s, Scott got to hear modern jazz being played by the likes of Charlie Parker, Dizzy Gillespie and Miles Davis at first hand.

He returned to London convinced that he would play this same kind of jazz in Britain, even if there was not yet a public ready to hear it. He played and recorded in the modern style with like-minded musicians in London's Club Eleven, and after stints with various other bands, formed his own nine-piece group in 1953, with a line-up that included the critic and writer Benny Green on baritone sax.

In 1957 he jointly fronted the Jazz Couriers with fellow-tenorist Tubby Hayes, and this band lasted until Scott (and his partner Pete King, another saxophonist) opened the first Ronnie Scott's night club in London's Gerrard Street in 1959. He frequently played with his own groups at the club, in between presenting the cream of the world's jazz musicians in an ideal setting for London audiences.

His subsequent premises in Frith Street became one of the world's most celebrated jazz rooms, complete with its own inbuilt studio and (eventually) its own record label. His tenor playing remained among the very best in Britain, and his groups included many famous figures in British jazz, including pianist Stan Tracey and organist Mike Carr. Between stints with his own group and acting as MC at his club, he played in Europe, notably with the Kenny Clarke -Francy Boland Big Band.

Documentary: Ronnie Scott and His Club 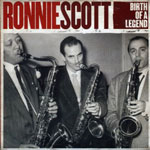 Birth Of A Legend

Birth Of A Legend

All About Jazz musician pages are maintained by musicians, publicists and trusted members like you. Interested? Tell us why you would like to improve the Heath Brothers musician page.