Director and piano player Clint Eastwood (Play Misty for Me, Bird, Unforgiven) explores his life-long passion for piano blues, using a treasure trove of rare historical footage in addition to interviews and performances by such living legends as Pinetop Perkins and Jay McShann, as well as Dave Brubeck and Marcia Ball.

Says Eastwood: The blues has always been part of my musical life and the piano has a special place, beginning when my mother brought home all of Fats Waller's records. Also, the music has always played a part in my movies. A piano blues documentary gives me a chance to make a film that is more directly connected to the subject of the music than the features that I have been doing throughout my career.

I think I liked playing the piano. Eastwood found a certain comfort at the piano, the one thing his family always took with them. His mother, who is 96-years-old, nurtured her son’s love of music.

Well, Eastwood recalled, when I was 11-years old, I used to imitate records and try to bang 'em out on the piano. I drove my mother crazy, I think. ‘Cause I'd be sitting there working a riff over 20 times in a row.

My mother knew how to read music and everything. But I just kinda learned off of records. And so, I was listening to records and I'd play 'em over and over. And in those days, they were ‘78s’ and vinyl. So they'd get sort of gray after a while.

It's one of the oldest jokes in the book: How do you get to Carnegie Hall? The answer, of course, is practice. As a jazz pianist, Clint Eastwood has taken a roundabout route to the august New York City concert hall. But when the legendary sixty-six-year-old actor/director finally took the stage at Carnegie Hall for a special musical performance the autumn of 1997, there was no question that he had earned the right to be there.

Eastwood is the most secure of American icons, one who grows in stature with each new film. Eastwood has filled his films with his favorite music. Bird (1988), his sinuous biopic of saxophonist Charlie Parker, was structured like bebop - full of motifs, improvisations, and sensations. Eastwood was also a "friend" of Round Midnight (1986), Bertrand Tavernier's loving homage to bebop, and he executive produced Charlotte Zwerin's Thelonious Monk: Straight, No Chaser (1988). Jazz is in his bones and in his leathery hide.

The Carnegie Hall show, entitled Eastwood: After Hours, a Night of Jazz, assembled a who's who of today's finest jazz performers; Eastwood himself joined in on piano, and his son Kyle played bass with his own quartet.

And while all the years his image grew upon the silver screen in Hollywood, the giant western film star could be found for decades sitting peacefully behind the piano bar of his favorite hometown (Carmel by the Sea) club, simpily playing that Jazz that he loves. 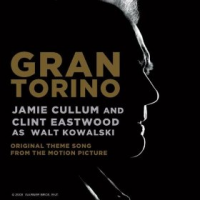 All About Jazz musician pages are maintained by musicians, publicists and trusted members like you. Interested? Tell us why you would like to improve the Clint Eastwood musician page.