Stan Tracey is an outstanding figure in the jazz world. His distinguished career has spanned five decades of flourishing creativity. He has been a highly influential and stimulating musical voice, not only to his peers but to each successive generation of musicians with whom he has worked.

Stan’s capricious piano playing combines the percussive melody of Thelonious Monk with the robust lyricism of Ellington in a highly idiosyncratic style. A master of harmony, he possesses a potent and compelling improviser’s intellect. Through Stan Tracey’s unflinching commitment and dedication has emerged a very rare artist who has sustained an output of highly exceptional music throughout his career.

A self-taught musician, Stan played his first professional engagement aged sixteen. The unlikely start of such a prestigious career saw him working for the forces entertainment network ENSA. However he quickly became involved in the lively emerging London jazz scene of the 1950s, playing in the bands of Laurie Morgan, Kenny Baker, Ronnie Scott and Tony Crombie.

From 1957-9 he played piano and vibraphone and arranged for the Ted Heath Orchestra. As house pianist at Ronnie Scott’s club from 1961 to 1967 Stan played with many of the most important figures in jazz history including Ben Webster, Roland Kirk, Wes Montgomery, Stan Getz, Zoot Sims and Sonny Rollins. His stature at that time is illustrated by his collaboration with Sonny Rollins which produced some of the most creative music of both musicians’ careers.

Throughout his career Stan Tracey has been a prolific composer writing over twenty commissions and music for forty of his own albums. His first work ‘Under Milk Wood’ inspired by Dylan Thomas’s poem of the same title, is widely recognised as a masterpiece. A number of suites for big bands followed, as well as works for his octet, sextet, and quartet, and all his work displays the same dynamic and original quality as his playing.

Over the years Stan’s work has attracted a host of accolades and awards. Throughout the sixties and seventies he regularly topped the Melody Maker polls. Since the eighties the list has expanded to include Honorary Membership to the Royal Academy of Music (1984), Fellowship of the City of Leeds College of Music, (1993), an Hon.D.Litt. from the University of Hertfordshire and the Silver Medal from the Worshipful Company of Musicians (1997). He received the OBE in 1986. He has also received the following British Jazz Awards: Best Pianist (1992), Best Composer/Arranger (‘93, ‘95 ,’97 & ’99), Best Album Release (1993) and Best Small Group (1995). The Under Milk Wood on the Blue Note label was voted Best Re-issue in ’94.

Ignoring the lure of commercialism, Stan remained true to his musical roots and celebrated 50 years as a jazz pianist at a concert in the Queen Elizabeth Hall in 1993, (recorded on the famous Blue Note label), and marked his 70th birthday with a 70th Anniversary Concert there in 1996. Recently celebrating his 71st birthday, and going from strength to strength, Stan, composer, band leader and solo performer, says, "Somewhere deep inside the crusty old cynicism is still the bright-eyed lad thinking, ‘Hey this is great!’"

Stan has toured internationally, and in 1997 was invited by the British Council in Hong Kong to perform a specially commissioned work for the Octet during the run-up to the hand-over of the Colony to China. His much acclaimed performance was the last official concert at Government House, and resulted in an invitation to visit and give a concert in Beijing and Guangzhou - the first time a jazz musician had received an official invitation to perform in mainland China.

Stan’s CD, Solo:Trio issued in 1998 received rave reviews in the national press. His quartet featuring Bobby Wellins have recorded a new CD , Comme D’habitude, available now on the Jazzizit label, and the original highly acclaimed recording of Under Milk Wood has been re-issued by Jazzizit. He embarks on his first coast to coast tour of Canada, which includes the world-famous Montreal Jazz Festival, plus a visit to Washington DC to play a special concert at the British Embassy, in June/July this year. Show less

Stan Tracey, Get the Blessing, Ronnie Scott's and Gwyneth Herbert for... 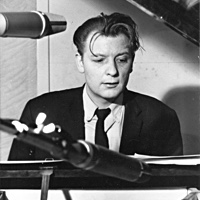 All About Jazz musician pages are maintained by musicians, publicists and trusted members like you. Interested? Tell us why you would like to improve the Stan Tracey musician page.