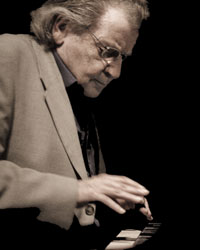 slideshow
Stan Tracey, a prime mover in British jazz for more than half a century, has died at the age of 86.

The jazz pianist and composer had a keen musical intelligence and was renowned for Under Milk Wood, his 1968 suite based around Dylan Thomas's radio play.

Tracey was born on December 30, 1926, in Denmark Hill, South London, and made numerous albums, some of which deserve a place among the great post-war jazz recordings. His father was not musical but his mother played the piano and violin. He said: “My first profound influence – once I had decided I wasn't going to be a boogie-woogie player – was Thelonious Monk."

Tracey had an unhappy time in America in the mid-Fifties, touring with Ronnie Scott, but returned to London and became resident pianist at Ronnie Scott's jazz club for seven years (1959-1966). He later worked with Ted Heath.