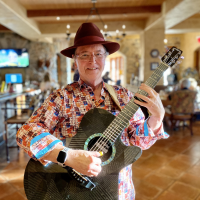 Walt Pitts is a musical chameleon. He may not change color to match his surroundings, but he has the impeccable ability to musically adapt to the environment of practically any live performance space. It’s this versatility that has kept Walt steadily booked at private clubs, resorts, weddings, and corporate events in the Phoenix and Scottsdale, Arizona, area for many years.

“I rarely use a prepared set list,” says Walt, whose primary instruments are guitar, mandolin and voice. “I like to get a feel for the venue and the audience and play what feels right in that moment.”

That ideal song might be Pat Metheny’s “Last Train Home” or Carlos Santana’s “Europa.” It could be a standard like “Fly Me to the Moon” or a party song such as Jimmy Buffet’s “Margaritaville.”

Then again, Walt might decide that the best musical mood enhancer would be a song by Ottmar Liebert, The Beatles, Tommy Emmanuel, Wes Montgomery, George Benson, Eric Clapton, Cold Play, Norah Jones, Dave Matthews, Sting, or Chet Atkins. Walt has a ready catalog of nearly 300 songs to choose from.

“My main goal when performing is to please the customer, which includes the person who hired me and the patrons or guests they are wanting to please,” Walt explains. “It’s not about me being in the spotlight. My live music often serves as background music, and I’m perfectly happy with that, because through my song choices and playing styles I set the mood that allows everyone to enjoy themselves.”

Walt can play his instruments acoustically or amplified, as well as stationary on a stage or strolling table to table through the room. While he can comfortably play unaccompanied, he also has a solid collection of backing tracks he produced himself to create the sound of a full band.

Walt also uses what’s known as a “loop pedal.” This allows him to play a rhythm section or instrumental riff that is repeated over and over. He then plays lead or sings over the loop, giving him the fuller sound of a two- or three-piece combo.

A Phoenix native, Walt spent a year in California in the 1980s to attend the Musicians Institute in Hollywood. There he studied with icons such as Joe Pass, Joe Diorio, Robben Ford, and Ron Eschete. After returning to Phoenix, he attended Arizona State University where he studied and taught jazz guitar under Chuck Marohnic.

“I love living in the Southwest United States, with its blend of cultures and musical styles,” Walt says.

“I’m sure that has colored my interest in playing a variety of musical styles.” Show less

All About Jazz musician pages are maintained by musicians, publicists and trusted members like you. Interested? Tell us why you would like to improve the Walt Pitts musician page.