In the 1960s, long before pop artists were backed by the generic, computer-based accompaniment that is commonplace today, singers often recorded with formidable house bands, including Booker T. & the MG’s and the Muscle Shoals Rhythm Section. The former band came together at Stax records in Memphis, laying down timeless grooves on hits by artists like Otis Redding, Albert King, and Carla Thomas. The latter group based in Muscle Shoals, as well as New York and Nashville, enhanced such classic tracks as Aretha Franklin’s “Respect,” Wilson Pickett’s “Mustang Sally,” and Paul Simon’s “Kodachrome.”

Growing up in the ’60s, a teenaged Robben Ford spent countless hours listening to artists like Aretha and Otis, at the same time soaking in guitar blues from Mike Bloomfield, Eric Clapton, and B.B. King. In his early 20s, Ford went on to join blues luminary Jimmy Witherspoon’s band. But soon, Ford experienced a diversion from the genre. In 1974, the guitarist was discovered by saxophonist Tom Scott, whose progressive fusion group, L.A. Express, then teamed up with Joni Mitchell to support her Court and Spark tour and play on two of her albums (1974’s Miles of Isles and 1975’s The Hissing of Summer Lawn).

Today, possessing a résumé that includes stints with an impressively broad range of other musical personalities Miles Davis, George Harrison, Little Feat, and the Yellowjackets, among many others Ford has demonstrated an uncanny adaptability similar to that of the MG’s and the Muscle Shoals group. The guitarist has effortlessly traversed genres without compromising his exquisite, blues-based playing and singing. So it’s only natural that on his latest album, Keep On Running (CCD- 2187), Ford tips his hat to Muscle Shoals and the MG’s, offering fresh takes on soul classics, in addition to serving up several glowing originals.

Keep On Running boasts a core group of heavyweight players, bassist Jimmy Earl and drummers Toss Panos and Steve Potts. Ford couldn’t be happier with his co- conspirators. Of the low-end, he raves, “Jimmy’s just about my favorite bassist in the world. He has a great feel, and he and I see eye-to-eye in terms of time; Jimmy is so comfortable to play with.” Ford is similarly praiseful of his percussionists: “Steve plays so beautifully. He can do rhythm ’n’ blues in such an authentic way, while at the same time sounding incredibly fresh. And I’ve played with Toss on the road for a couple of years now; I’ve really benefited from his unique feel.”

Among other instrumentalists, Ford expanded the core group with a battery of keyboard players. But after the recording was completed, Ford, a relentless perfectionist, found that their sounds were incongruous. He explains, “At a certain point, I thought, ‘What’s wrong with this picture?’ It turned out I just didn’t want to hear the [Hammond] B3 [organ].” So Ford, himself a diligent multi- instrumentalist, redid most of the keyboard parts, using the more appropriate-sounding Wurlitzer electric piano.

Ford’s journey throughout this CD, his second for Concord Records, covers many musical miles. Starting things off, the title track is a fresh though faithful cover of the Spencer Davis Group classic, which captured a then 17-year-old Steve Winwood on vocals. Joining the core cast here are Bob Malach on tenor sax and Edgar Winter on baritone; Ford expertly handles the guitar, vocal, and keyboard parts. “I really dug this record when I was growing up,” says Ford. “I’d been wanting to hear it again, but it only recently became available on CD. My producer [John Wooler] also had this song in mind. We worked up an arrangement at rehearsal recorded it.”

“Over My Head” showcases Ford’s organic, breezy compositional style in a song dealing with the oldest of subjects: man chases woman, followed by heavy infatuation. Here, his smooth, blues guitar screams and moans in a perfect extension of the song’s soulful vocals. “‘Over My Head’ came from a casual guitar riff that I found myself playing one day,” says Ford. “The words tumbled out quite naturally. The riff seemed to suggest something many men go through as one point, or many times•meeting a woman you know is dangerous but find completely irresistible.”

Ford was at first uncertain about “Can’t Do My Homework,” originally recorded by Otis Rush. The guitarist says, “We played the song, but it has such a camp lyric. It felt so good, though, and was so much fun to play, that we just had to use it.” And it is such an enjoyable listen, too. Showcased here are Ford’s gorgeous guitar tones and sharp, playful improvisations, which never stray too far from Rush’s original version.

On “Badge” (written by Eric Clapton and George Harrison, and recorded by Cream), Ford offers another respectful cover, his smooth vocals backed by those of Siedah Garret (the singer also appears on “Bonnie”), and his creamy guitar tone recalling that of Clapton, while retaining Ford’s own unmistakable imprint. “I’ve always loved the first Cream album, which is brilliant,” says Ford. “Recording ‘Badge’ was John Wooler’s idea. I’m glad he suggested it; the song so was nice to use as a touchstone, since I had worked with Harrison, and he had recently passed away. You can really hear his influence in there, as well as Clapton’s.”

“Peace Love & Understanding” finds Ford using R&B to smooth out a more rocking version recorded previously by Elvis Costello. On this outstanding song, Ford duets with the legendary Mavis Staples (who, incidentally, began her recording career at Stax/Volt in 1969, backed by the MG’s) commenting on the difficult times as of late. Ford explains, “I have to say that I didn’t grow up listening to Elvis Costello. But this song presented a great opportunity: I don’t like what’s going on in the world right now, and “Peace Love & Understanding” expresses a beautiful sentiment.

A smart blues instrumental, “Cannonball Shuffle” was written by Ford for Freddie King. The composition showcases Ford’s gutsy though refined playing, in addition to some fine soloing from Malach. Ford says, “While planning this album, Wooler and I were talking a lot about Freddie King. As a youngster, I’d never gotten next to him, but now that I’ve taken the time to get inside his style, I modeled ‘Cannonball Shuffle’ after tunes like ‘Hideaway’ and ‘The Stumble.’”

The album’s second half “Me and My Woman,” “Bonnie,” “Lifetime Thing,” “For the Love of Money,” and “Hand in Hand With the Blues” maintains a similar vibe. It’s at once old-school and, thanks to Ford’s outstandingly fresh playing, contemporary. Ford says, “This is the music I grew up with, when things were more carefree. For me, the album is full of nostalgia. I think we could all use some of that kind of feeling today.” Show less 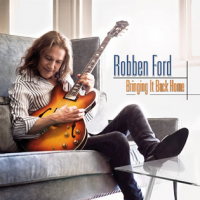 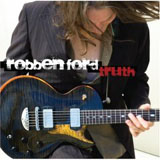 From: Soul on Ten
By Robben Ford 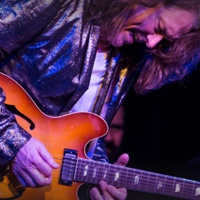 All About Jazz musician pages are maintained by musicians, publicists and trusted members like you. Interested? Tell us why you would like to improve the Robben Ford musician page.