Vincent Colaiuta is a highly regarded drummer based in Los Angeles. Originally from Brownsville, Pennsylvania, he began playing drums as a child and received his first full drum kit from his parents at the age of 14.

After attending the Berklee College of Music in Boston for a year, Colaiuta relocated to Los Angeles and made a mediocre living playing with lounge bands. His break came in April 1978 at the age of 22, when he auditioned for Frank Zappa, an audition that involved performing the notoriously difficult piece entitled "The Black Page". The audition was successful and Colaiuta went on to work with Zappa as his principal drummer for studio and live performances. Colaiuta's performances on Zappa's albums Tinsel Town Rebellion, Joe's Garage and Shut Up 'n Play Yer Guitar are considered by many drummers to be among the most astounding ever recorded. Joe's Garage was named one of the top-25 drumming performances of all time in a 1993 Modern Drummer article.

In 1990, Colaiuta successfully auditioned for the drum spot in Sting's touring band in support of his album The Soul Cages. Colaiuta remained as a member of Sting's band for the next seven years. He declined the offer to go out on the road for the Brand New Day tour in 1999 due to the unusually grueling amount of time that Sting prefers to cover the globe. Colaiuta's studio work with Sting can be heard on Ten Summoner's Tales (1993), Mercury Falling (1996), three songs on Brand New Day (1999) and two songs on Sacred Love (2003). In September of 2003, Vinnie returned to Sting's touring lineup in a brief promotional tour of Sacred Love, but once again declined the offer to participate in the world tour.

Colaiuta released a self-titled solo recording in 1994, and still remains one of the most in demand studio musicians playing on countless albums[2], film soundtracks, TV and radio jingles. His dedication to self-improvement is legendary: Dom Famularo, a famous drum educator and Colaiuta's friend, once told a story about Colaiuta opening his door while practising on a drum pad; after a few minutes of a chat on the door step, Colaiuta said: "I'm such a bad host, I haven't offered you anything! Do you want a pad?"

Colaiuta has won a total of 18 'Drummer of the Year' awards from Modern Drummer magazine's annual reader polls. These include 10 awards in the 'Best Overall' category. Colaiuta was inducted into the Modern Drummer "Hall of Fame" in 1996. The publication also cited Colaiuta as being the most important drummer of our time.

More recently, Colaiuta recorded and toured with Faith Hill, recorded with the thrash metal outfit Megadeth on their album The System Has Failed, and has most recently toured with Jeff Beck and Herbie Hancock.

In 1990, Colaiuta teamed up with the Zildjian Cymbal company to create the A Custom line of cymbals,[3][4] based on the world's best-selling A Zildjian cymbals. These bright, fast-decaying cymbals can be heard on Sting's Ten Summoner's Tales and countless other recordings, often mixed with K Zildjian and K Custom models. In photographs from the UnReel Drum Book, it is clear that Vinnie's kit used on the recording of Randy Waldman's first solo title "Wigged Out" features a ride cymbal bearing the iconic K logo on the underside, suggesting that Vinnie uses cymbals from his private collection (as the only cymbals with the K underside logo date back to the 70's and early 80's) for recordings.

Colaiuta endorses Gretsch Drums and has his own signature kit. He often uses USA Custom drums in Europe and his signature drums in the US and the far east, but recently used the New Classic line of drums when touring with Herbie Hancock and the Renown Maple series live with Jeff Beck. Show less

From: The Landscape
By Vinnie Colaiuta

From: Uncommon Measures
By Vinnie Colaiuta

From: ARC Trio
By Vinnie Colaiuta 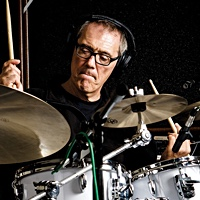 All About Jazz musician pages are maintained by musicians, publicists and trusted members like you. Interested? Tell us why you would like to improve the Vinnie Colaiuta musician page.