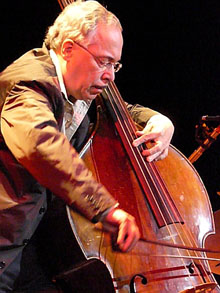 Eddie Gomez is known throughout the world as a consummate bassist, sterling educator and a musician active in a wide variety of musical settings. He has been on the music scene for more than 40 years and has worked with everyone from Bobby Darin to Giuseppi Logan. Gomez moved from Puerto Rico as a child and was playing music from an early age. He came to prominence when Bill Evans asked him to be the bassist for the pianist's trio, a position he held for 11 years. Gomez also won the 2009 Latin Grammy for Best Instrumental Album: Duets (Acqua Records, with Carlos Franzetti).

All About Jazz: I'd like to start by asking about Bill Evans. How did you first get the gig, how long did it last, what was its influence on you?

Eddie Gomez: Bill heard me play at the Village Vanguard. I was working with Gerry Mulligan's quintet back in 1966 opposite Bill's trio. He was looking for a new bassist and sent his manager over to ask if I could meet him. I was very timid at the prospect of meeting one of my heroes but I went and he was kind, very complimentary. I was in shock, couldn't really believe what I was hearing from an idol. He said he hoped that we could play together sometime and I thought that even if I never did it was good enough that he said those nice things to me. He called a few weeks later and asked me to go on tour with him. At the time I was working at the Copacabana with Bobby Darin. I had to quit Bobby but that was easy enough because the chance to play with Bill was like a dream come true. I did a West Coast tour for a month or so and then he said, "I'd really like you to stay on and be the bassist for my trio." I was 21 years old and felt it was like having a gold mine made available to me.

AAJ: Who was the bassist before you?

EG: At that time it was Teddy Kotick from Boston. But Chuck Israels had played with him and Gary Peacock and, of course, Scott LaFaro, the great innovator.

AAJ: How long did you stay with Bill?

EG: 11 amazing years, 1966-77. They were great, learning years with an amazing impact on my artistic growth. I grew as a bassist, as an artist—I learned about sound, about soloing, about how to accompany, just everything. It took me a while to relax and truly fathom that I was making music and contributing to the output of an artist and a trio of this caliber.

AAJ: Who were the drummers during that time?

EG: There were quite a few: Ivory Joe Hunter, Philly Joe Jones, Marty Morell, Philly Joe again, Eliot Zigmund. And then guys sat in—that was always fun. Guys like Elvin Jones, Tony Williams. It was really great playing with Bill and Philly Joe—that was like a Twilight Zone episode for me.

AAJ: Why did you leave the trio?

EG: I was there 11 years and there were things that were starting to come my way. I actually thought I was going to play with him again but he died. I actually still dream about playing with Bill. I love his music and it's in my heart forever. But at the time there were other things that I wanted to explore. I have a broad range of interests musically and so I thought I'd try some other things.

AAJ: How did you come to do things like, say, work with folk musician Tim Hardin?

EG: I did a lot of work with the flautist Jeremy Steig and his group Jeremy and the Satyrs. It was kind of a jazz/rock band and through that work, I came in contact with people like Richie Havens, Tim Hardin and a singer you may not remember named Sandy Hurvitz [she changed her name to Essra Mohawk]. So, all of these people were around and music from all sorts of places has always touched me. It doesn't have to be genre-specific and it doesn't always have to be jazz.

AAJ: How did you first come to hear and then play jazz? 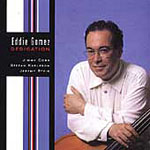 EG: I grew up in New York, on 110th Street on the West Side. I heard all kinds of music growing up. I started playing the bass when I was 11 years old and whatever music touched my soul, I wanted to participate. Early on it was Miles, Coltrane, Sonny Rollins, Count Basie—I listened to it all. I was in this group called the Newport Youth Band and played at the Newport Jazz Festival, played with Marian McPartland, played with Benny Goodman when I was 18 and with other great players like Edmond Hall, Pee Wee Russell, Ruby Braff. Played with Paul Bley.

AAJ: Tell me about the recording with multi-instrumentalist Giuseppi Logan (ESP-Disk, 1964).

EG: I loved the way he played and also loved his drummer, Milford Graves. Actually, I played with Milford on a Montego Joe record [¡Arriba! (Prestige, 1964)] and through Milford got to play with Paul Bley, John Tchicai and, I think, that's how I met Giuseppi. In fact, Chick Corea was on that Montego Joe album too.

AAJ: And your work with JoAnne Brackeen?

EG: Joanne's music was always challenging and fun. And she likes the bass to be very involved, not just a backup instrument. I'm not saying there's anything wrong with being an accompanist—there's a real art to that, too. I played with her recently and I still enjoy her music. She's grown as an artist.

AAJ: And your own recordings as a leader?

EG: Mezgo [1984] was one of the earliest ones—it had Chick Corea, Steve Gadd and Kazumi Watanabe on guitar. I made that in Japan and went on to do other recordings that reflected my eclectic side. Some of the early ones were kind of crossover projects and the more recent ones have been more straight-ahead.

AAJ: Are you teaching?

EG: Yes, I teach at the Conservatory in Puerto Rico, in San Juan. I have a residency, which means I get to fly in once a month for about five days. I've been doing that for about five years and it's great also because that's where my mom is. I love the students there very much. I'm the Artistic Director of the jazz program and I love seeing the strides these students have taken. I also get to bring musicians there. There's a great Afro-Caribbean program and of course the classical tradition which goes back to Pablo Casals.

AAJ: Let's talk about this gig at the Blue Note this month [May, 2010] with Chick Corea and Paul Motian.

EG: I met Chick when I was about 16. He was going to Juilliard and I was finishing high school. We played together for a while, kind of went our separate ways when I went with Bill, but came back to play on a couple of records together. We did his Mad Hatter [(Polydor, 1978)] album and we've always had a good working relationship. I think our perspectives on music are very similar. He's a great pianist, great composer and he's a lot of fun to be around.

EG: I'm doing a lot of touring and recording. But you know, I really don't get paid to play. It's kind of like I get paid to travel and the playing is free, a pleasure.

AAJ: How much composing do you do?

EG: I'm not a prolific composer but I do work at it. In fact, I'm working now on an album of my tunes. There is a lot more of my music on the way.

AAJ: What basses do you play?

EG: I have a bass that was put together by Arnold Schnitzer. It's actually a composite bass, made of three basses that he put together. I call it my Frankenstein bass. I also have a wonderful instrument that David Gage restored for me recently.

AAJ: Finally, which bass players have been most influential to you?