Eddie Gomez: The Call of the Wild

How to survive in jazz music? One of the people who can answer this question is bassist Eddie Gomez. With his 11 year cooperation he was the longest serving sideman of pianist Bill Evans. After interviewing Evans-bassist Chuck Israels in Holland, I called Gomez a few weeks later in his hometown. Twice there was a connection to his voicemail saying: “Here is Eddie. Please leave your message when you hear the call of the wild" (subsequently a cry of a ... 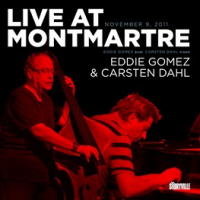 Recordings are now being made in Montmartre, the legendary Copenhagen jazz club, which--thanks largely to the efforts of pianist Niels Lan Doky--reopened in 2010. The original Montmartre started in 1959 as a venue for trad, which Scandinavians call “happy jazz." Stan Getz, who lived in the Danish capital from 1958-1961, introduced more modern sounds, followed by other expatriate Americans, including Ben Webster and Dexter Gordon. The club moved to larger premises and from 1976-1989 ... 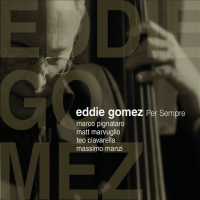 Taken as a cohesive statement--a one-hour piece of art in a world of downloads and diminishing attention spans--bassist Eddie Gomez's Per Sempre stands out, with the minor and enviable disadvantage of opening with the set's loveliest tune, “Arianna." Good news/good news: the rest of this superb outing is just a notch--a small one--below that level of excellence.Gomez surely learned something from his eleven-year tenure as pianist Bill Evans' bassist. Evans was a master at assembling excellent trios that ... 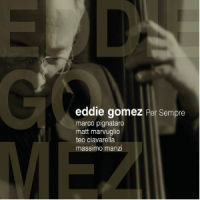 Bassist Eddie Gomez has never received the attention he deserves as a leader. While that's largely due to the fact that he spends so much time making other people sound better, the reason isn't important; it's an injustice, regardless of the cause. His pliant and flexible bass has been the binding agent and rhythmic-melodic-harmonic go-between responsible for bolstering the work of pianists like Bill Evans, Chick Corea and Hank Jones, drummers like Jack DeJohnette and Steve Gadd, and countless others ...

Eddie Gomez is known throughout the world as a consummate bassist, sterling educator and a musician active in a wide variety of musical settings. He has been on the music scene for more than 40 years and has worked with everyone from Bobby Darin to Giuseppi Logan. Gomez moved from Puerto Rico as a child and was playing music from an early age. He came to prominence when Bill Evans asked him to be the bassist for the pianist's trio, ...

Eddie Gomez has long been one of the most valuable bassists in jazz, especially after his 11-year stint in the Bill Evans Trio. After leaving Evans in 1975, he was quite active on record dates, including his unusual ...

Eddie Gomez: Playing Well with Others