Bill Evans: You Must Believe In Spring (Hybrid SACD)

By Doug Collette
September 16, 2022
Sign in to view read count 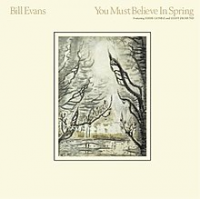 The quietude with which "B Minor Waltz (For Ellaine)" opens You Must Believe In Spring belies the hearty homage this release constitutes in recognition of the title's forty-fifth anniversary. As a means of righteous and deserving tribute to his seventieth studio album, the late Bill Evans' debut for the Warner Bros. label is enhanced in a number of ways.

First and foremost is the sonic upgrade for hybrid-SACD (as well as the vinyl LP configuration). Using the Plangent Processes Playback System, with remastering by Paul Blakemore, the fastidious effort provides a clean sheen for the audio on, for example, "The Peacocks." The technical work thus furthers an impression of this playing as a single string of exchanges between the three instrumentalists.

In addition, three tracks of some twenty-three extra minutes bring the total playing time close to an hour. Taken from the 1977 sessions at Capitol Studios Los Angeles, produced with sensitivity by Tommy LiPuma and Evan's long-time recording session collaborator Helen Keane (and previously issued only on the 2003 Rhino Records compact disc), these include a take on the only song from Miles Davis' Kind of Blue (Columbia, 1959) that Evans did not play on; "Freddie Freeloader" is further notable for Evans' use of a Fender Rhodes electric piano in addition to his customary acoustic instrument (in this case the studio's Steinway).

In his essay within the twelve-page booklet enclosed in the jewel box, Marc Myers does a perfectly scholarly job in revealing the backstory behind those cuts and the album in general. He does, however, struggle for words to describe the music and, as a result, his decidedly overly-effusive prose only makes the poetry of Bill Zavatsky—his "Elegy (For Bill Evans, 1929-1980)," also incuded in the cover booklet—ring more true in its evocation of the sublime sensation that comes from hearing this music.

In much the same way, this re-release of You Must Believe in Spring lends veracity to the belief there is no such thing as too much of the late iconic pianist/composer's work. More importantly, however, it offers a readily-accessible gateway into Evans' work for those not familiar with it, as well as a bountiful addition to the collections of those who've long doted on the late great musician's oeuvre.

B Minor Waltz (For Ellaine); You Must Believe In Spring; Gary’s Theme; We Will Meet Again (For Harry); The Peacocks; Sometime Ago; Theme from M*A*S*H* (aka Suicide Is Painless); Without A Song; Freddie Freeloader; All Of You.