Ruby Braff began his jazz career as an out-of-time traditionalist playing with veteran jazzmen of an earlier age, and rose to establish his own standing as one of the handful of leading artists playing in traditional and mainstream idioms.

He did so on the back of one of the most beautiful instrumental sounds in jazz, a prodigious gift for phrasing melody, and an acute harmonic sense which revealed his awareness of more modernist developments in jazz. Louis Armstrong remained his touchstone and only avowed master, but his playing also reflected the influence of musicians like Bix Beiderbecke and Bobby Hackett. His musical voice, though, was always very much his own.

He was born Reuben Braff in Boston, and was self-taught on his instrument. He said that he wanted to play saxophone, but his father bought him a cornet instead. His trumpet style, which largely eschewed high-note pyrotechnics in favour of a softer exploration of the middle and bottom registers of the instrument, reflected that original love of reed rather than brass sonorities.

He began working in local clubs in the Forties, and was recruited for the band led by the veteran clarinettist Edmond Hall at the Savoy Cafe in Boston in 1949. He made the move to New York in 1953, and was soon in demand for gigs and recording sessions in a traditional and mainstream vein.

His loyalty to traditional jazz at a time when the focus had shifted to more modern styles starved him of work for a time in the Fifties, but he returned to prominence with an All-Star touring band created by pianist and jazz impresario George Wein. Wein remained a loyal backer of the cornetist, and featured him regularly on his international tour and festival circuit.

He worked with major band leaders like Buck Clayton, Benny Goodman and Bud Freeman as a young man, and in turn became something of a musical mentor to a new generation of young mainstream musicians in the Seventies, including saxophonist Scott Hamilton and guitarist Howard Alden.

In the Eighties and Nineties he made a series of recordings for the major mainstream jazz labels Concord Jazz and Arbors, and formed highly-regarded duo partnerships with pianists like Mel Powell, Ralph Sutton, Dick Hyman, Ellis Larkins and Roger Kellaway.

Braff worked with singer Tony Bennett for two years from 1971-73, then formed a very popular and artistically successful band with guitarist George Barnes. The relationship ground to a halt in 1975 in characteristic fashion when Braff fell out with his collaborator.

That pattern of alienating those around him was repeated on many occasions. Braff may have made some of the most beautiful music in jazz, but his own character was precisely the opposite. He was notorious for his abrasive and insulting behaviour to other musicians, promoters and even fans, a tendency made all the worse by his failing health over many years (he suffered from emphysema, glaucoma and heart problems).

He was the headline artist at the first Nairn Jazz Festival in northern Scotland in 1990, and his appearance at the 2002 event was to be the last performance of his life. He cancelled a subsequent scheduled concert at the Brecon Jazz Festival in Wales and returned home. He was never fit enough to perform in public again. Show less 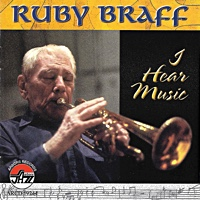 Music For The Still...

All About Jazz musician pages are maintained by musicians, publicists and trusted members like you. Interested? Tell us why you would like to improve the Ruby Braff musician page.