Steve has been playing trumpet professionally for over 20 years. Early in his career he performed with and learned from some of the best musicians in the Albany area including Nick Brignola, Mike Canonico, Rennie Craine, Mike Wicks, George Muscatello, and Brian Patneaude.

Steve moved to New York in 1999 to pursue a Bachelors Degree in Mechanical Engineering from Columbia University. After graduating he worked in the office of Second Floor Music for two years as assistant to world-renowned jazz trumpet player/arranger/producer Don Sickler. This office was on 28th St, formerly tin pan alley. While on staff at Second Floor, he interacted with such legends as Jim Hall, Renee Rosnes, Charli Persip, Ray Bryant, and Rudy Van Gelder, and worked on many SFM publications including “The Thelonious Monk Fake Book”, “Sing Jazz!”, and Charli Persipi's “How Not To Play Drums.” Steve also freelanced around Manhattan, working at such jazz clubs as Kavehaz, Louis, and The Garage, and honed his chops while frequenting many jazz jams around the city including those at Smoke, The Lenox Lounge, Smalls, and Cleopatra's Needle.

. He was on staff in the pit of The Cohoes Music Hall from 2004-2006 where he played 2nd trrumpet for West Side story, lead trumpet for A Chorus Line, Annie, La Cage Au Follex, and Ain’t Misbehavin’. He currently performs with: the Empire Jazz Orchestra, the Big Soul Ensemble, the Sensameya Latin Jazz Band, the Ragtime Windjammers, the Phil Allen Concert Jazz Band, The Silver Arrow Band, Mike Thomas, The Downtown Horns, the George Muscatello Quartet, the Dave Fisk Quartet as well as many projects under his own name. Show less

Steve Lambert
”The music is pumped full of life by a young leader full of talent and passion, and by a white-hot band that can show respect while they’re having fun – not to be confused with ‘screwing around.’” J Hunter (All About Jazz)

“The Lambert Sextet could have played Carnegie Hall or Lincoln Center, and nobody there in attendance would have been asking where’s Wynton, Branford, Redman, Watts, Werner or whoever. This was the real deal.” —Reviewer Andrzej Pilarczyk 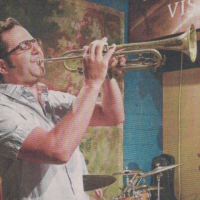 All About Jazz musician pages are maintained by musicians, publicists and trusted members like you. Interested? Tell us why you would like to improve the Steve Lambert musician page.