Internationally renowned jazz baritone saxophonist Nick Brignola came from a musical family in Troy, N.Y. His grandfather played tuba and his father worked his way through school playing banjo and guitar at parties and dances.

Nick, mainly self taught, began playing clarinet at age eleven, then added the alto and tenor saxophones and flute. His major instrument became the baritone saxophone at age twenty, when his alto was being repaired and the only "loaner" the music store had available was a baritone. The rest, as they say, is history.

Nick listened to many forms of music at home and his earliest influences included Paul Desmond of the Dave Brubeck Quartet and the big bands of Benny Goodman, Harry James and Woody Herman. He was later attracted to the more modern harmonies of the early Stan Kenton band, Claude Thornhill and West Coast jazz musicians such as Stan Getz.Then came the hard Bop of Charlie Parker, Miles Davis, and Sonny Rollins among others. However, his greatest baritone influence was Harry Carney of the Duke Ellington band who became his mentor. Harry encouraged Nick to take the horn to another level and Nick in turn made it his voice.

At a young age, Nick was part of a group that was named the Best College Jazz Group by Down Beat Magazine and as a result spent several weeks at the Cafe Bohemia In Greenwich Village New York City playing opposite such greats as Miles Davis, Thelonious Monk, Buddy Rich, Cecil Payne and Cannonball Adderly.

Nick has toured and recorded with the bands of Woody Herman, Charlie Mingus and Phil Woods, but most of his career has centered on performing with his own quartet. His current group performs at festivals, clinics and clubs... where Nick continues to take the baritone to another level.

On A Different Level 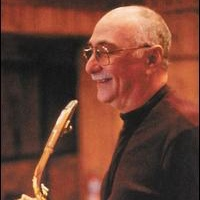