The notes to this thoughtful and beautifully executed disc suggest this is the first collection in which the tunes share the trait of all starting with an octave interval. True, perhaps, but what sets it apart is smart music passionately and intelligently played by musicians committed to the fine art of communication. Carol ...

Eddie Gomez is known throughout the world as a consummate bassist, sterling educator and a musician active in a wide variety of musical settings. He has been on the music scene for more than 40 years and has worked with everyone from Bobby Darin to Giuseppi Logan. Gomez moved from Puerto Rico as a child and ...

Uptown Records, in the person of its founder Bob Sunenblick, has become something of a jazz missing persons—or sessions—bureau. The label's Flashback series have released rare treasures by some of the giants of the music as well as some of the more unsung heroes. Uptown has released 'new' recordings by Charlie Parker, Dizzy Gillespie, Kenny Dorham ...

Bassist Ron McClure has a practical philosophy about what he does. “Making music begins with doing your job," he says. “It's nice if you can be a hot soloist, but do your job first and do it well." These are words that the bassist has lived by for over 40 years in the jazz music business. ... 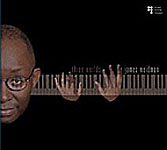 Three Worlds is the product of a thoughtful musical soul. Pianist James Weidman is well-versed in the traditional and modern jazz vocabulary and has found ways of deftly incorporating what's he's heard into his playing and composing. And here he adds color to his pianistics with melodica and the exotic xaphoon, a single-reed keyless bamboo wind ...

Sean JonesThe Search WithinMack Avenue2009 Ralph BowenDedicatedPosi-Tone2009 Bobby SelvaggioModern TimesArabesque2009 Trumpeter Sean Jones is only 30 but here he is with his ...

Matthias Winckelmann's favorite recording of the hundreds he's made is the one just finished. Over the years, he's documented music from all over the world and of many different stripes and has always been eloquent and passionate. His label Enja has been in existence for 38 years and a look at the catalogue tells you that ...