By Donald Elfman
April 9, 2010
Sign in to view read count
Uptown Records, in the person of its founder Bob Sunenblick, has become something of a jazz missing persons—or sessions—bureau. The label's Flashback series have released rare treasures by some of the giants of the music as well as some of the more unsung heroes. Uptown has released 'new' recordings by Charlie Parker, Dizzy Gillespie, Kenny Dorham and Charles Mingus but has also unearthed gems from pianist Dodo Marmarosa, trumpeter Dupree Bolton and saxophonists Serge Chaloff and Lucky Thompson.

Sunenblick is a doctor of internal medicine in Montreal. He heard jazz recordings in college and was first taken with the Stan Kenton band of the '50s and some of its soloists and then later by people like Gene Ammons and Charlie Parker. He brought the label into existence nearly 30 years ago, in 1981, partnering with another physician, Mark Feldman. Sunenblick notes, "I was a record collector and I thought that a lot of musicians weren't being recorded because they weren't commercially viable. So I started recording these sorts of eccentric musicians and found out that I didn't have the skill as a producer or to be kind of psychiatrist." Nonetheless, Uptown began life with LPs by three of these long unrecorded musicians. Joe Thomas, a tenor player from the Jimmie Lunceford band (the record had the provocative title Raw Meat); And A Little Pleasure by JR Monterose, a tenor saxophonist who had recorded in the '50s-60s under his own name for Blue Note and other labels (and was living upstate and playing at an Albany club called the Lark Tavern) and perhaps the most most unusual, Back on Broadway, by dancer John W. Bubbles with pianist Frank Owens.

"I guess these records were alright," says Sunenblick, "but you had to be much more experienced than I was. But I continued—I did Dicky Wells, I did Davey Schildkraut but eventually I got into more established artists like Charlie Rouse, Tommy Flanagan and Kenny Barron." After many years of such recordings and being what Sunenblick refers to as "invisible," the label got noticed in a piece in the New York Times. It was a rare recording of Charlie Parker and Dizzy Gillespie at New York's Town Hall from June of 1945. "It was really the first time I did an interview and the nature of the recording got the label more noticed than it had ever been—the catalogue titles began to sell."

Uptown has been justly celebrated for the effort it has put into its packages. Consider 2003's In the Land of Oo-Bla-Dee. The album includes fake doctors note on leader Allen Eager (a tenor saxophonist who was one of the best of the Lester Young-influenced players) and the music by Ira Gitler, detailed information, photos and interviews by Sunenblick with Eager and some of the not-well-known sidemen, a reprint of a DownBeat article from 1947 and facsimiles of newspaper ads from 1953. 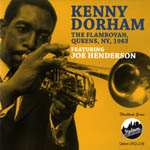 2009 alone saw some stunning additions to the Flashback Series. Most notable was Dupree Bolton's Fireball. Not only does it include a rare broadcast and licensed outtakes from a Pacific Jazz release, but tunes from the time the trumpeter played in a prison. "Bolton was in jail a good deal of the time but in the times when he was out he would play and create excitement," said Sunenblick. I was able to track down the 1962 broadcast with [saxophonist] Curtis Amy and also found a terrific recording engineer, Bill Welham, who did wonders with the original source recording. I licensed two tracks from Pacific Jazz and then also included this prison band recording. I heard about it from Don Schlitten and then the guy who was in charge of the program, Paul Brewer, helped me find the recording."

Uptown started to change over to CDs in 1988 and now is in the process of bringing back more LP titles to that format. Already released are two very special recordings from the last part of Charlie Rouse's career. Sunenblick states fondly, "I just want to say what a nice guy Charlie Rouse was. I love the two records we did with him—pairing him with Red Rodney on one and Sahib Shihab on the other." Also planned are more catalogue LPs—Sunenblick has talked about the JR Monterose and a session with Frank Wess and Johnny Coles. And there'll be more Flashbacks too. It seems as if this detective never sleeps.