Home » Jazz Articles » The Convoy Tour: 25 Years of The Ex

The Convoy Tour: 25 Years of The Ex

By Eyal Hareuveni
April 8, 2010
Sign in to view read count 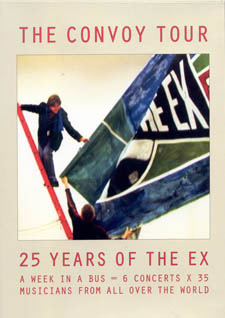 Dutch group The Ex might be one of the greatest jazz bands ever. Not, most certainly, because it has mastered a traditional, neo-con agenda, but because it rebels constantly against all such paradigms and conventions, be they aesthetic, political or personal—moving forward all the time, challenging itself, taking risks, valuing surprise and experiment, never succumbing to a numbing corporate mentality. The Ex always displays a restless desire to push the envelope outward, towards a better world and, at the same time, towards an art that will make a difference, an art that will challenge the observer and his or her fixed conceptions and beliefs.

The Ex bagan working in 1979 as a punk band, the musicians choosing instruments by drawing straws. It decided on its name because it was so well suited to graffiti campaigns (it takes only 2 seconds to spray the letters). Through the years and personnel changes it has expanded its musical and artistic palette. The lineup on this DVD celebrating its 25th anniversary is one of its strongest ever, with only two founding members: G.W. Sok (aka Jos Kley) on vocals and Terry Ex (aka Terry Hessels) on guitar.

In November 2004, the group began its anniversary celebrations with a two day party at the Paradiso club in Amsterdam along with 68 of its favorite musicians—from the Dutch ICP Orchestra and British sax innovator John Butcher, to Japanese dancer Hisako Horikawa, Ethiopian saxophonist Getatchew Mekuria and singer Mohammed Jimmy Mohammed, and Italian extreme-jazz trio ZU. It then took to the road with 35 of these friends, for concerts in France and Belgium.

This DVD captures some of the highlights of this dense, sleepless and inspiring tour—and there were plenty of them, onstage and backstage. The punkish versions of Ethiopian melodies with Mekuria, then 71 years old and playing for the first time outside Ethiopia; current vocalist Arnold De Boer and his wild mix of grindcore and short, ultra-fast pop songs in the duo Zea; fascinating sax solos by John Butcher; Punk band Fugazi's front man, Ian MacKaye, improvising beautifully on acoustic guitar with the blind Mohammed; Dutch master drummer Han Bennink, a close friend and collaborator of The Ex, turning Mohammed's song into a festive hard-swinger using just his snare and hi-hat; Mekuria and the ICP Orchestra taking an Ethiopian song and turning it into a Duke Ellington-like suite; a moving Ethiopian song performed by The Ex drummer, Katherina Bornefeld, who sings and dances with Mohammed's trio. Each scene moves organically into the next, with the musicians' sophisticated improvisations flowing from the twin sources of elemental African or punk songs.

Some scenes feature previous or future collaborations between members of The Ex and other musicians. The collaboration between French sound poet Anne-James Chaton and The Ex's guitarist Andy Moor, here on a poem dealing with Microsoft's Bill Gates, blossomed later as a duo project, Le Journaliste (Unsounds, 2008). The Thermal trio, consisting of Butcher, Moore and analog synth player Thomas Lehn, had recorded for Unsounds in 2001.

The Ex features on only two tunes. The first is an open-ended, thorny improvisation with dancer Horikawa, and showcases the group's ability to experiment with rhythms and textures. The second is an arresting and powerful guitar take on a riff from the Congolese band Konono No. 1, "Theme from Konono." The Ex repeats the mighty power chord with intense conviction, as if it was a kind of a secular prayer, but at the same time, Borenfeld and double bassist Rozemarie Heggen keep expanding its rhythmic possibilities. When G. W. Sok begins to shout through a megaphone, "Cuba! History has just begun!"—a denial of American neo-con Francis Fukuyama's assertion that history has ended—the song reaches an ecstatic emotional climax.

But the group doesn't stop; it keeps pushing more and harder. After this, there can be no doubt that The Ex is indeed a totally amazing band.

Production Notes: 83 minutes. Filmed on location in 2004 in The Netherlands, France & Belgium.