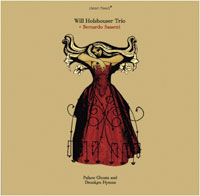 Inspired by the sights, sounds, and people of Lisbon, Portugal, American accordionist Will Holshouser collaborates with Portuguese pianist Bernardo Sassetti on a recording that is equal parts jazz (European and American), folk (again European and American—both North and South American), and chamber music. While it may take an ethnomusicologist to sort out all the roots and influences, it can easily be described as "grinning Portuguese music."

With the addition of Sassetti, a pianist comfortable in classical and jazz who also writes film scores, Holshouser's concept of chamber jazz is realized with true folk sensibilities both inside and out. It may be the Portuguese sailing traditions of gathering influence from distant ports and seeding ideas with commerce that is at the heart of this recording. On "Danca Palaciana," by Portuguese guitarist Carlos Paredes, the band might begin at Mozart but they end with the dirty rice trumpet of Louis Armstrong at the port of New Orleans. Thus is the mingling of cultures. The romantic folk of the accordion gives way to the classical piano then Ron Horton's gutbucket snarling trumpet. The quartet has set sail, bringing Europe to the New World. Hello, we've found the blues!

The remaining tracks are compositions from either Holshouser or Sassetti. Both are of the same mind, melding the tango with klezmer, folk with blues, or jazz and chamber music to create populist sounds. With musicians of such quality, it is no chore to slip from one style into the next, producing sweet, patient melodies in "The Oldest Boat," then jagged complex runs "Irreverente," and finally the heartbreaking ballad "The Department Of Peace."

The disc closes as it opened, at the intersection of classical and folk with "Drunkard's Hymn," a church located next door to a tavern. The patrons rush between the two, imbibing the tonic of the preacher and the pitcher. The band plays the proper hymn before Horton's slurred tones open the bar, and the band gives way to a sort of Americana, a folk music surely with roots in the Old World.