Kazumi Watanabe lives up to his name as the Japan’s world-class, top jazz guitarist. His quick tempo weaves fascinating ad libs and affluent melodies; he has been noted for elaborately combining various performing techniques and infusing rich expressive power to each and every note to create a one-of-a-kind “Kazumi Sound”. He has made the world his stage for over 40 years, transgressing genres and borders to perform with an outstanding number of domestic and international artists. The natural-born improviser also builds a unique world of composition and arrangements, always pioneering frontier instrumental music.

Born 1953 in Tokyo, Kazumi Watanabe took the piano at the tender age of seven, but picked up the guitar at age 12 inspired by the Ventures. At 15, he was stunned by the music of Wes Montgomery and turned his aspiration to jazz. He made his debut at age 17 with Infinite and was quickly hailed as the guitar prodigy extraordinaire. While playing in Japan’s top-profile groups led by artists such as Masaru Imada, Sadao Watanabe, and Isao Suzuki, he led his own band as well. From around Olive Steps (1977), he rode the wave of popularity of fusion and guitar music, taking in not only jazz fans but also rock fans under his wings. In 1979 he formed KYLYN with then-up-and-coming stars in the Japanese music scene, namely Ryuichi Sakamoto, Akiko Yano, and Shuichi “Ponta” Murakami, and went on to release an album, perform live, and tour. KYLYN earned the recognition as the legendary band that had made a tremendous influence on the Japanese music scene thereafter, with each member still playing pivotal roles in respective scenes. In the fall of that year (1979) Kazumi participated in Yellow Magic Orchestra’s world tour as guest guitarist. His play won rave reviews in everywhere he went, which catapulted his name to international fame.

TO CHI KA (1980), produced by Mike Mainieri, marked an unprecedented sales figure and brought Kazumi to the forefront of the fusion scene. The release was followed by an 11-city tour with Mainieri on vibraphone, Warren Bernhardt on piano and keyboards, Marcus Miller on bass and Omar Hakim on drums. Then up to 1985, he made more epoch-making steps than you could count, such as playing alongside Eddie Gomez and Steve Gadd in the Japan tour of STEPS, a group of cream of the New York-based musicians, as well as the Brecker Brothers Band’s performances at New York’s Seventh Avenue South and their Japan tour, and bassist Jaco Pastorius’ Japan tour to name a few.

On the other hand, Kazumi continued to push the envelope of fusion in Kazumi Band, his own band formed with musicians of notable, extraordinary techniques such as saxophonist Yasuaki Shimizu, keyboardist Masanori Sasaji, bassist Kenji Takamizu and drummer Hideo Yamaki. With another band MoboⅢ, a trio with bassist Greg Lee and Shuichi “Ponta” Murakami, he toured the United States performing 17 shows in 12 cities including New York, enjoying high acclaim in each city. Furthermore, recorded with ultra-heavyweights such as Marcus Miller (bass), Omar Hakim (drums), Robbie Shakespeare (bass), Sly Dunbar (drums), and Michael Brecker (saxophone), album Mobo earned high acclaim as a work of experimental approaches to a new sound. During this time, Kazumi produced a number of seminal works in the history of fusion, and established his stature as Japan’s top guitarist.

In the late 80s, Kazumi actively explored new fields and recorded an album in London with drummer Bill Bruford, the British rock giant renowned for his activities in King Crimson, and bassist Jeff Berlin. The unit toured twelve cities in Japan, and went on to record another album in London as well as doing many more tours, winning overwhelming support from progressive rock fans across the nation. He also led a band with Kei Akagi on keyboards, Bunny Brunel on bass, and John Wackerman on drums, touring 9 cities in the United States and performing at the Montreux Jazz Festival in Switzerland. On a tour sponsored by The Japan Foundation, he visited Indonesia, Sri Lanka, Bangladesh, Thailand, and China, and performed with local musicians.

In the 90s, Kazumi began to immerse himself into acoustic guitar as well, combining it with electric to further expand his musical field. He played strings of European dates such as Barcelona (Spain), Italy, and France with leading free jazz pianist Yosuke Yamashita, as well as Bulgaria and Lisbon (Portugal) with bassist Nobuyoshi Ino, all enjoying high acclaim.

Starting with a guitar duo on Tokyo Music Joy with John McLaughlin back in 1987, Kazumi has presented and continues to present to this day the best part of collaborations with world’s high profile guitarists, exciting enthusiasm in many guitar fans. The long list of collaborated guitarists include Al DiMeola at the Mt. Fuji Jazz Festival in 1993, Larry Coryell on recording sessions and tours, Babik Reinhardt, son of Django Reinhardt at the Django Festival in 1997, Toninho Horta, Ralph Towner, Roland Dyens, and Martin Taylor.

After participating in the Yatsugatake Music Festival directed by contemporary music composer Toru Takemitsu in 1992, Kazumi forged close ties with classical guitarists as well, and began to receive more requests of music contributions and arrangements. This led him to begin exploring the world of unplugged guitar music, and to experiment resonance with the vibrancy of classical music halls.

As for muscular electric music, Kazumi formed RESONANCE VOX that was active from 1991 through 1996. On the other hand, he led ASIA FANTASY ORCHESTRA in 1995, a 32-piece orchestra of Asian musicians from various genres. The orchestra performed in four cities namely Singapore, Kuala Lumpur, Jakarta and Tokyo, as well as African countries as part of the “Taiko Meets Jazz” project. While rooting in his Japanese identity, the improviser developed a global communication field that went beyond the borders of genres.

In 1998, Kazumi recorded Dandism in New York, a tight duo album with pianist Makoto Ozone. The following year he recorded live at the Bottom Line in New York with his New Yorker friends Mike Mainieri (vibraphone), Larry Coryell (guitar), Akiko Yano (piano), John Patitucci (bass), and Mino Cinelu (drums), resulting in One For ALL, a perfect live album to curtain the 20th century.

Stepping into the 21st century, Kazumi released Beyond The Infinite, a guitar suite to commemorate the 30th year of his career as a guitarist. Upon composing and arranging the music, he drew on his improviser’s side and created his own unique world, making the suite a borderless work of art that freely transgresses genres such as classical music, contemporary music, jazz, rock, and folk. The suite was premiered and released as an album as well. Later, it was rearranged as an orchestral suite and was premiered in 2006 conducted by Seikyo Kim.

In February 2003, Kazumi released Guitar Renaissance, the first album in his career he performed completely solo. In May that year, he recorded Mo’Bop in New York as the New Electric Trio with bassist Richard Bona and drummer Horacio el Negro Hernandez. The trio was highly publicized when they world premiered at Tokyo Jazz 2003. Since then for the next four years, he continued to release and perform series of acoustic and electric projects in parallel.

With his solo performing skills that he matured with Guitar Renaissance series, he increased his efforts in his solo activities in Europe in 2006, performing in Rome and Paris, as well as participating in a guitar festival in Iceland. At the same time, he launched the Asian Super Guitar Project with guitarists from Korea and Hong Kong. Fruiting album Guitar Sam Guk Ji, the trio performed in Japan and Korea as well as various jazz festivals in Asia.

In 2007, Kazumi produced Castle In The Air, a collaborative project with pianist/composer Koko Tanikawa, his musical and personal partner since 1997, who had been producing his overall activities from album making to live performances. The album was released in late 2007. As part of the duo unit also named Castle In The Air, he supported Koko’s worldview and music, rooted in her deep insight on world environment and the concept of coexistence with nature. The unit also contributed music for the live-action version of movie Grave Of The Fireflies that hit theaters in 2008.

In the midst of such myriad activities, Kazumi also launched the “Return To Jazz Project” to focus on his point of origin. He released Jazz Impression in fall 2009, and continues to perform live all across the nation as a duo with bassist Yosuke Inoue and occasionally with guest artists.

In the four-city, seven-show China tour sponsored by The Japan Foundation in 2009, Kazumi presented a stereoscopic rendition of contemporary music with jazz saxophonist Masato Honda, Koko Tanikawa, and Chinese Pipa player Jiang Ting, which enjoyed high acclaim. This experience made him realize a new enthusiasm and potential in contemporary China especially in terms of jazz and fusion, as well as the importance of nurturing young local jazz players.

2010 has seen a string of events commemorating Kazumi’s fingerprints career anniversary as a guitarist, including a concert with an orchestra in July where he played all movements of Concierto de Aranjuez, the gold standard of guitar concertos, with a pick. Being the first person in all genres to take on such a challenge, the concert naturally garnered much attention. On top of this, he will perform at Tokyo Jazz in early September leading "TO CHI KA 2010”, a one-night-only reunion with then-tour mates Mike Mainieri (vibraphone), Warren Bernhardt (piano/keyboards), Marcus Miller (bass) and Omar Hakim (drums) for the first time in 30 years, raising expectations among long time jazz/fusion fans. Recently, he also performed at the Saito Kinen Festival Matsumoto as part of a special unit deriving from the Toru Takemitsu Tribute project that had enjoyed rave reviews at the Japan Week 2008 in Washington DC. The unit will perform at Carnegie Hall in New York and in Orange County in December.

Kazumi has enjoyed numerous exposures on TV, radio, and their special programs, including regular appearances on Yumeno Rannyusha on Kansai TV for six years since 1990, as well as instructing in Acoustic Guitar for Beginners on NHK’s educational channel in 2003. On radio, he deejayed on Dogatana World: Kazumi Watanabe’s Good Vibration and navigated NHK FM’s Jazz Tonight for two years since 2005. He shares his experiences in his musical life in print media as well, contributing essays occasionally and regularly.

Contributing music to and sometimes participating in musicals and plays such as DJANGO 1953, Barcelona Story, Blood Wedding, and Kaihogen to name a few, Kazumi has collaborated with a wide variety of performing arts such as dance, Noh dramas and traditional Japanese music, exerting his high flexibility and capability. He enjoys his stature as a first-call guitarist in film music, composing and performing theme tunes and music to grace important scenes.

Kazumi Watanabe is currently guest professor at the jazz course of Senzoku Gakuen College of Music. He has received the prestigious Fumio Nanri Award in 1991. Show less

The Spice Of Life Too

The Spice Of Life 2 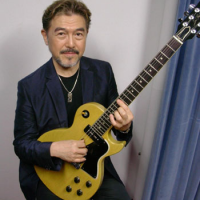 All About Jazz musician pages are maintained by musicians, publicists and trusted members like you. Interested? Tell us why you would like to improve the Kazumi Watanabe musician page.