Born on 19 December 1942, in Fort Worth, Texas. A self-taught guitarist, Dupree became a professional musician in his home town while still in his mid-teens. Soon thereafter, he joined King Curtis' band in New York City where he worked with Jimi Hendrix. He became the guitarist of choice for Atlantic Records in the late '60s, after legendary producer Jerry Wexler brought in Dupree to help shape the label's soul tracks."It was our practice to use three (or even more!) guitarists on a record session," said Wexler. "We were looking to create some kind of interweave with the rest of the rhythms — the bass, drums, keyboard. Time and again we would get into a hellacious mess as the three guitarists invariably got in each other's way. ... And so when Mr. Dupree, the pride of Fort Worth, came to our rescue, it was bye-bye to multiple guitars because — miraculously, it seemed to me — one man, playing rhythm and lead at the same time, took the place of three."

Dupree's work for Atlantic earned him a10-year tenure with Aretha Franklin, one of the label's superstars. "I just know that during all that while with Aretha, I immensely enjoyed it," says Dupree. "It was all about the feeling, and the way she expressed herself vocally was another inspiration for me."

Dupree crafted his signature style by building on a base of the deep Texas blues he heard growing up. Dupree loved the sounds of T-Bone Walker and Lightnin' Hopkins, but the syncopated twang in his sound came from an eclectic assortment of artists from the Lone Star state and beyond. "I was inspired by Johnny "Guitar" Watson, and Wayne Bennett, who I was fortunate enough to hear with Bobby 'Blue' Bland," remembers Dupree. "There were country and western artists I enjoyed, too, like Hank Williams and Ernest Tubb."

Dupree's diverse musical interests are reflected in his own choices for the five pieces that contain his best work: "I'm most proud of “Rainy Night in Georgia,” with Brook Benton, Aretha Franklin's “Live at Fillmore West,” “King Curtis' Live at Fillmore West,” Donny Hathaway's “Live,: and Lil' Esther Phillips on “From a Whisper to a Scream."

Dupree runs down those titles without a trace of braggadocio, and his humility has probably been an intangible ingredient in his success as a sideman and session pro. He was a member of the band Stuff in the mid ‘70’s, which spun off into the Gadd Gang. Since making two studio albums of his own in the ‘70s; notably his first outing “Teasin,” (’74) and “Shadow Dancing,” (78) Dupree's own name recording sessions have seen him in company with David "Fathead" Newman and Ellis Marsalis, both appearing on 1988's Grammy nominated “Coast To Coast,” Hank Crawford (having recording under the saxophonist's leadership in 1986 and again in 1998), Bobby Watson, Terell Stafford, and Ronnie Cuber.

He opted for more of his funky style in the sessions like “Can't Get Through,” (’91) “Uncle Funky,” (’92) and “Child's Play,” (‘93) Although best known for his rousing R&B work and his soulful backing, Dupree's range is considerably wider than this might suggest. On the 1994 session that produced “Bop 'N' Blues,” he does exactly what the title suggests and digs into a bop mode with considerable aplomb. He continued solo efforts by releasing two sides in 1998, “Unstuffed,” displaying a more laid back attitude, and “Double Clutch,” a compilation of earlier work.

By the turn of the century, he did some touring and performing as Cornell Dupree and his Bayou Buddies. The band is four kindred spirits from New Orleans, bassist George Porter Jr., drummer Jeffrey "Jellybean" Alexander, keyboardist Marc Adams and saxophonist Brian "Breeze" Cayolle.

In 2006 he was playing with some of the most respected veterans of Soul-Jazz and R&B, known as The Soul Survivors. This ‘supergroup’ featured the combined artistry of pianist Les McCann and guitarist Cornell Dupree, along with drummer Buddy Williams, saxophonist Ronnie Cuber and the great Jerry Jemott on bass.

Cornell Dupree has quietly chiseled out a celebrated career, and has the resume to prove it. But it’s not a matter of simple quantity, which is evident in his case, but more that of a sustained quality which make his contributions to modern music, a unique expression of artistic excellence. 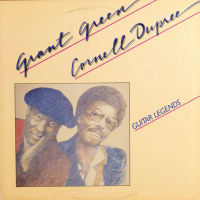 All About Jazz musician pages are maintained by musicians, publicists and trusted members like you. Interested? Tell us why you would like to improve the Cornell Dupree musician page.