Eric Gale was a top studio guitar man, and a first call session player on many dates from the '50's through the '90's. His reliable accompaniment can be appreciated on scores of records as a sideman, and through his own efforts as leader.

Born Sept. 20, 1938 in Brooklyn of Barbadian parents, Gale studied chemistry at Niagara University. He took up the double bass when he was 12 years old and also played tenor saxophone, trombone and tuba before he chose the guitar. The basis of his style was formed on the 50s and 60s R&B circuit.

He was with the Drifters, Jackie Wilson, the Flamingos and Maxine Brown, before playing in the 60s with King Curtis, Jimmy Smith, David "Fathead" Newman, Mongo Santamaria and Aretha Franklin.

In the early 70s Gale became the house guitarist with Creed Taylor's new CTI Records label. Gale’s association with Creed Taylor began when the celebrated producer was working at Verve Records. Curiously, their first sessions together, on August 18 and October 24, 1966, were part of a Johnny Hodges album titled “Blue Notes;” a very peculiar name for a Verve LP!

During the A&M/CTI years, Eric Gale was heard on albums by Herbie Mann, Soul Flutes, Richard Barbary, Quincy Jones, and J.J. Johnson & Kai Winding. When CTI became a completely independent label, he became the house guitarist for one of its subsidiary labels, Kudu Records, appearing on the first album issued under the Kudu logo: Johnny Hammond’s "Breakout." Many other sessions followed and, on January 1973, Creed Taylor finally allowed him to record as a leader.His album "Forecast," was well received and gained him broader recognition outside of just his sideman role.

Even after Eric Gale signed with Columbia, he continued to record as a sideman for Creed. Besides performing as rhythm guitarist on George Benson’s sessions which yielded the albums “Good King Bad,” “Benson & Farrell,” and “Pacific Fire,” he appeared as a featured soloist on Bob James’ last album for CTI, “BJ 4,” as well as on Lalo Schifrin’s two albums for CTI in 1976, “Black Widow,” and “Towering Toccata.”

For Kudu, Gale kept recording until 1977, on albums by Grover Washington, Jr. (Soul Box, Mister Magic, Feels So Good, A Secret Place), Esther Phillips (Capricorn Princess), Idris Muhammad (House of The Rising Sun, Turn This Mutha Out), and Hank Crawford (I Hear A Symphony, Hank Crawford’s Back, Tico Rico). Then, in September 1981, he was reunited again with Creed Taylor during the sessions for “Silk,” the second album by the all-star project Fuse One.

He was in 1975, a founder of the influential funk band Stuff along with artists including Steve Gadd, Cornell Dupree and Richard Tee. They played regularly at Mikell's in Manhattan with only minimal rehearsal, and released four popular albums for Warner Brothers.

In the early 90s he performed as a regular band member in several US television shows. Gale thought like a frontline musician and played like a saxophonist. Gale’s big popularity in Japan is mainly the result of many tours with the legendary Stuff group (which did a best-selling live album at Yubin-Chokin Hall in 1978), Sadao Watanabe (How’s Everything �" Live at Budokan in 1980) and Dave Grusin (Grusin and The NY-LA Dream Band, also at Budokan, in 1982).

Gale was presented by bassist/producer Ron Carter on a strictly jazz date in 1987, for the album “In A Jazz Tradition.” With tenor saxophonist Houston Person, organist Lonnie Smith, and drummer Grady Tate completing the quintet, the music is soul-jazz with a strong dose of bebop. Since Eric Gale rarely recorded in this type of freewheeling group, the swinging set was his definitive jazz recording.

He continued to tour Japan regularly, sometimes three times a year, until 1993.In 1994, soon after performing on Al Jarreau’s "Tenderness" album (fortunately documented on video), Gale passed away on May 25, 1994, in Baja, California. Show less 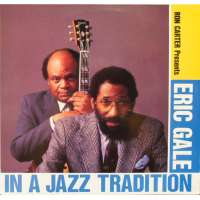 In A Jazz Tradition

All About Jazz musician pages are maintained by musicians, publicists and trusted members like you. Interested? Tell us why you would like to improve the Eric Gale musician page.