State and Mainstream: The Jazz Ambassadors and the U.S. State Department 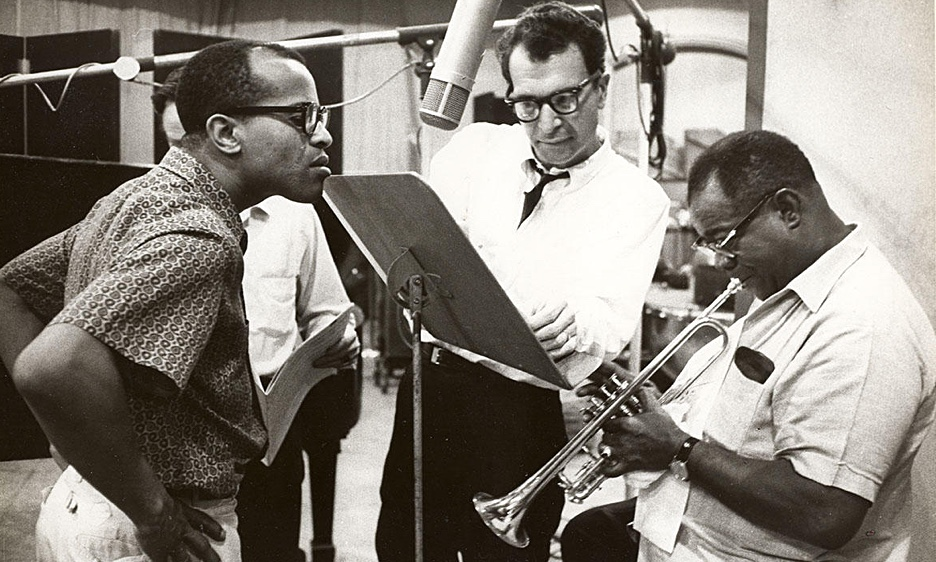 He had no political message, no slogan, no plan to sell or save the world. Yet he, and the other traveling musicians like him had inadvertently served a national purpose. —Iola Brubeck

The Cold War that began in 1947 and ran for forty-four years, had jazz music as its primary deterrent to global tensions, and it did more to foster good will between the U.S. and global citizens than any previous program launched by the U.S. Department of State. Jazz music, even in its Golden Age, was seldom a front page story in the national press so it was a rare publishing event when the Sunday New York Times placed such a story just beneath the fold on November 5, 1955. A dramatic headline, United States Has Secret Sonic Weapon—Jazz, was followed by this even more provocative sub-headline: Europe Falls Captive as Crowds Riot to Hear Dixieland But Vast Propaganda Value Is a Secret to Washington, Too. The author, Felix Belair Jr., was a well-respected Washington-based reporter and editor with the Washington bureau of the newspaper and had covered every presidential campaign from 1936 through 1964. His connection to the subject matter likely had more to do with his knowledge of the U.S. Department of State than with jazz. The essence of the article was Belair's suggestion that the U.S. government would be better served by subsidizing "the travels of jazz bands" rather than spending money on other forms of propaganda to promote democracy. It was an audacious suggestion in the paranoid age of McCarthyism.

The "riots" of the NYT headline referred to occurrences in France and Germany and were driven by a shortage of seating for concerts by Sidney Bechet and an unnamed Dixieland group. The travels of jazz bands that Belair referred to, were the precursors to the State Department's Jazz Ambassador program and the Eurasian appetite for this music was taken far more seriously than most forms of entertainment. Belair points to a general European frustration with the lack of music promotion by American representatives at embassies, consulates, and in other official capacities. He suggests that citizens living behind the Iron Curtain would sometimes risk their lives to smuggle jazz recordings into their countries. In truth, jazz was actively being promoted throughout Europe and beyond. Touring American jazz groups and shows like Porgy and Bess, recordings and radio programs such as the U.S. Department of Defense Armed Forces Network's Jazz International, blanketed the continent.

Cultural diplomacy, in the form of music, began long before a prescribed program existed and often without an applied goal. Broader exposure, and a more hospitable environment for black American jazz musicians abroad were motivation enough to draw those artists—pre-jazz and beyond—to Europe, as far back as the late 1800s. In the early 1920s, Sidney Bechet toured Europe, as far east as Russia, with Benny Carter and Duke Ellington covering similar territory into the 1930s. In 1931, at the height of Benito Mussolini's fascist regime in Italy, Louis Armstrong toured that country despite a clear anti-American sentiment. It speaks to the widespread admiration for jazz outside the U.S., that such cultural exceptions were made. Jazz was frequently offered as a genuine manifestation of the American way of life though the unrestricted expression of that life was often freer outside the US. The irony had never really been lost on Western Europe and became clearer in the East thanks to a persistent Soviet anti-American campaign that capitalized on the perception of U.S. hypocrisy and the illusion of a more progressive Soviet bloc. Political maneuvers notwithstanding, both sides of the Cold War understood that the popularity of jazz could be shaped to benefit for their own causes.

Cultural exchanges were a significant precursor to the Jazz Ambassador Program and began when Nelson Rockefeller, then a coordinator of Commercial and Cultural Affairs for the American Republics, facilitated the 1940 exchange of journalists from Latin America and the U.S. Later in the decade an American music radio program, Viva América was broadcast live by CBS in North America and La Cadena de las Américas in Latin and South America, from 1942 to 1949. The U.S. State Department strictly controlled the musical content of the programs making the enterprise a rare government/private sector venture. Shortly after World War II concluded, Senator J. William Fulbright introduced the Fulbright Program leading to a more formalized cultural exchange program. While both sides in the Cold War touted cultural exchanges as a means to alleviate the negative perceptions nurtured by political foes, the inside voices were prone to dark conspiratorial theories. Willis Conover began broadcasting his legendary jazz program on the Voice of America radio network, in 1955. By design, the programs were not broadcast to American audiences but throughout Europe and Asia where he had more than one-hundred million listeners, including many in the Soviet bloc. These programs primed the pump for live American jazz performances in those Iron Curtain countries.

In 1954, President Dwight D. Eisenhower appealed for funding from the House Committee on Appropriations with the purpose of countering Communist propaganda with the off-shore display of American exceptionalism. The approved funding was dispersed across multiple government agencies but more than two-million dollars was allocated to the State Department for the presentation and promotion of American theater, music, dance and some sporting events. The U.S. State Department's original Jazz Ambassadors Program officially began in 1956 and continued into the late 1970s. The program, beyond that point, continued through the Bureau of Educational and Cultural Affairs in the U.S. State Department, working in partnership with the John F. Kennedy Center for the Performing Arts. In 2017 I interviewed Elaine Clayton, Public Affairs Specialist at the U.S. Department of State, Bureau of Educational and Cultural Affairs. Ms. Clayton elaborated on the later transitions of the program: "Since 2011, the program has been known as American Music Abroad (AMA), implemented by the Association of American Voices, and has sent over 40 bands to over 100 countries. It is currently an active program, and there is a Notification of Funding Opportunity out...to implement the 2018-2019 season."

The Harlem Congressman and activist, Adam Clayton Powell Jr. initiated the concept of having jazz musicians replace classical orchestras and ballet companies on international tours. Powell believed that jazz music was a better representation of the American experience. A friend of Dizzy Gillespie, Powell helped set the stage for the trumpeter's large ensemble tour of Europe, the Middle East and Asia. In Greece, anti-American sentiment was running high as the U.S. was seen as supporting that country's oppressive dictator. Gillespie, however, was greeted as an icon and carried through the streets by admiring fans. Gillespie's omnipresent sense of humor, his odd, self-taught playing style and his genial personality, were traits that somewhat overshadowed his enormous contributions to modern jazz, at least to the general public. Gillespie and a handful of others such as Charlie Christian, Charlie Parker, Max Roach and Thelonious Monk, initiated the metamorphosis of swing into bebop with complex melodies, progressive harmonics and chordal inventions, and these players extended the imaginative potential of jazz far beyond dance music. And despite his outward affability, Gillespie had a strong social conscious and a demonstrative breaking point. The book Playing the Changes: Milt Hinton's Life in Stories and Photographs by Hinton, David G. Berger, and Holly Maxson, (Vanderbilt University Press, 2008) details the violent account of an altercation between Cab Calloway and Gillespie, when the trumpeter was in Calloway's band. In 1941 Calloway wrongly accused Gillespie of causing a minor disruption in the band and struck him when he wouldn't admit to doing so. The authors contend that Calloway was posturing in the presence of two female onlookers and continued to aggressively press Gillespie to the point of humiliation. Gillespie then stabbed Calloway in the leg with a pen knife. The wound was superficial and Calloway went on to perform that same night. Gillespie—as of the incident—was no longer in the band but his career was no worse off for the episode.

The trumpeter validated his commitment to racial equality as an active participant in the Civil Rights Movement. Gillespie was part of Norman Granz "Jazz at the Philharmonic." That groundbreaking project was guided by Granz insistence on completely integrated seating at venues. Gillespie was a vocal advocate for free medical care and housing for those in need; He contributed to the Congress for Racial Equality (CORE) and the Southern Christian Leadership Conference (SCLC), both prominent Civil Rights organizations; he half-jokingly ran for president in order to draw attention to racial issues. In David Carletta's Those White Guys Are Working For Me: Dizzy Gillespie, Jazz and the Cultural Politics of the Cold War During the Eisenhower Administration (International Social Science Review 82, No 3-4, 2007), the author describes Gillespie's reaction to the off-shore reception his band received as part of the Jazz Ambassdor Program: "People asked us a lot of questions about racism in the United States. But they could see it wasn't as intense because we had white boys and I was the leader of the band. That was strange to them because they'd heard about blacks being lynched and burned, and here I come with half whites and blacks and a girl playing in the band. And everybody seemed to be getting along fine. So I didn't try to hide anything I said, 'Yeah, there it is. We have our problems but we're still working on it. I'm the leader of this band, and those white guys are working for me. That's a helluva thing. A hundred years ago, our ancestors were slaves, and today we're scuffling with this problem, but I'm sure it's gonna be straightened out some day. I probably won't see it, completely, the eradication of racial prejudice in the United States, but it will be eliminated." Gillespie was less diplomatic in his autobiography (written with Al Fraser), To Be or Not to Bop: Memoirs of Dizzy Gillespie (Doubleday, 1979). In advance of a Jazz Ambassador tour Gillespie was summoned to Washington D.C. for a briefing. His reply was angrier in tone: "I've got three hundred years of briefing. I know what they've done to us, and I'm not going to make any excuses. If they ask me questions, I'm gonna answer them as honestly as I can." He added what was obvious to black artists of the era: "Americans don't seem to appreciate our own native music here, as well as people do in foreign lands—in Europe, Asia, South America, and Africa..."