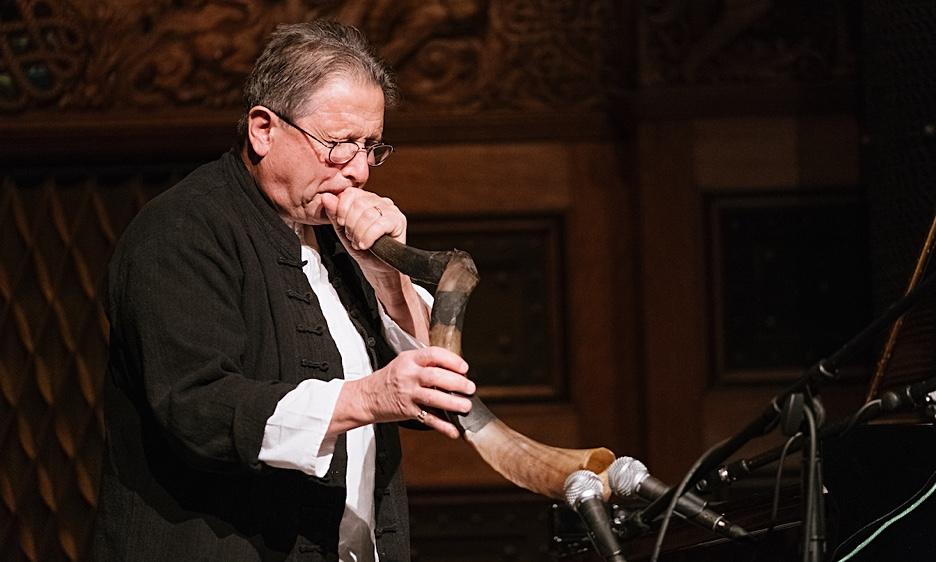 The composer and keyboardist Alvin Curran was born in Providence, Rhode Island, and is now a sprightly 79 years old. His work with Musica Elettronica Viva in Rome, from 1966 onwards, is of most interest to followers of improvised music. Curran created electroacoustic pieces with Steve Lacy, Richard Teitelbaum and Frederic Rzewski. The majority of his work, however, has been composed, although usually sounding like spontaneity is still allowed, and freedom to move is integral to the construction.

His appearance as part of the Artists Studio series at The Park Avenue Armory, in NYC's Upper East Side, found Curran mostly at the sampling keyboard, but he also revealed his sideline as a soloist on the shofar, a Jewish ceremonial horn (and we do mean horn, in the literal sense: a long, curly ram's headpiece) (actually, Curran revealed that his own horn is, unusually, from an East African kudu, an antelope variant). Of course, said shofar was subject to electronic interference. Curran elected to present multiple compositions, but woven into each other as a seamless alternative medley, a 'greatest hits' of the avant-garde. He called it The Alvin Curran Fake Book. This was self-published by his wife, Susan Levenstein, in 2015. Curran describes this as the world of 'might and could...' composition subject to improvisation.

The newly restored Veterans Room, with its elaborate decorative trimmings, was an ideal location for this future-arcane ancient-moderne music. "Shofar Shoals" involved didgeridu-type drone-calls, sent into a pair of collecting microphones, to magnify their interior rumblings, their spittle-clicks, their scribbles and blips, as the level sonics were interrupted by lip-breaks, breath-changes and momentary pauses. It was a simple source, steadily complicated via magnification, exaggeration and accumulation. A high pitched whine evolved. Where was that coming from? Like a permanently squeaking door-hinge. High reeds and low tuba were simultaneously suggested. Somehow, there were also episodes from "Octograms," "Endangered Species," "Era Ora" and "Unstandard Time."

Curran placed the shofar inside his acoustic piano, plucking strings and plinking odd keyboard notes, whilst an electronic pattern continued to tangle, until Curran triggered an outburst of electro-scuzz, littered with stray voice snatches. This was already way better than his gig at the Whitney Museum in 2016. Turning to his synth-keyboard, Curran bled chimp sounds into prayer-song, just some of the many samples housed within its entrails. The shofar returned, sounds piling up in a dense collage, foghorns heralding creature-of-the-deep grumbling, then cutting to a phantasmagoria of clipped hip-hop beats, sliced and diced as part of the barrage. It's as though Curran was sampling the samples, in a never-ceasing evolution of aural magnification.

The electronics cut out, and Curran returned to the acoustic piano, cockroaching about thoughtfully, but it wasn't long before one hand was pulled uncontrollably across to the synth again, his main addictive device, making a scraping sound, matched with a plaintive whining call, continuing with a driving piano part. The entire set was suite-like in formation, with Curran continually exploring new relationships, and smearing fresh layers of urban waste onto his classicist canvas.

When NYC drummer Ben Perowsky's five-night residency began, The Stone had been fully open for nearly two weeks in its fresh location at The New School in Greenwich Village. There had been a partial diary in operation for around nine months, during the last days of the original Stone in Alphabet City. Perowsky's gig with keyboardist John Medeski and guitarist David Tronzo was a highlight in an already strong programme, representing the latter's rare showing in the city since moving away, just over a decade ago. Therefore, it wasn't so surprising that the set reached full capacity within minutes of the doors opening.

The trio began with some swirling abstraction, a marshalling of forces, with Tronzo on wobbling slide, sometimes providing basslines. Medeski skated lightly at the high end of his Hammond organ, and Perowsky admired the nine or ten cowbells arrayed across his kit in order of size. Slowly, a propulsive jazz groove arrived, with its roots in the 1960s and its high feelers in the now-zone. Medeski gushed complexity, and Perowsky used his small extra side-tom and foot-operated woodblock. He produced an aggressive timbales-type sound on his snare, and worked his long, unusually tubular bass drum, looking like it could naturally be boomed within a samba setting.

They bounced, they stung, the cowbells rung, and Medeski kept a low profile prior to hitting with a solo, as Tronzo followed, using a large tin can as slide implement, for extra Hawaiian feeling. Perowsky invited Mike Rivard to guest on the sintir, a Moroccan gnaoua three-stringer, opening up a number with just him and Medeski, getting into a deeply resonant pulse. Despite the ever-strict Stone curfew (transplanted from the old joint), the trio returned for an encore of two tunes, firstly a heavily altered "Rockin' In Rhythm" (Duke Ellington), and then David Bowie's "All The Young Dudes," as popularised by Mott The Hoople. We were grateful that the trio stuck around for both of these chestnuts..!

Another night, another rarely-sighted guitarist, another scorching combo! Pedals galore for the guitar and cello (David Torn and Hank Roberts), meaning that it wasn't always so clear who was generating which heavily processed sound. Tim Berne led at first, but the foursome soon developed a groupscape, Torn whaling up with a scaly solo, Roberts operating in the Far Eastern tonal smear-zone of trumpeter Jon Hassell. Some alien being introduced a deep bass tolling, probably Torn, or possibly Perowsky, as he too was loaded with an array of effects. The leader set up a skittering pattern, and Berne ascended in an overblowing spiral, Torn fuzzing as Perowsky struck hard time. It wasn't clear quite what Roberts was doing until the guitar and alto ceased, so he was probably just playing too quietly, possibly intentionally. He was left alone, with a wavering drone, then a trio coalesced, with Berne standing out (he took a rear placement a few times during the set, sagely contemplating his next strategy).

Torn made distorted disruptions, but when Berne returned, the group calmed down into an evocative inwardness, until Perowsky set up a rotational cowbell-spreading cycle, reminiscent of Can drummer Jaki Liebezeit's old technique, clacking wildly. This encouraged Berne to make a Junior Walker & the All Stars loop, for a comparatively straight funk-out, Torn sounding like a huge Stylophone, Roberts breeding a bassy slider-monster. Their improvisation was so assured that the results sounded like a pre-envisioned landscape, a hybrid state between acoustic sources and electronic alterations, scintillating unto the horizon.