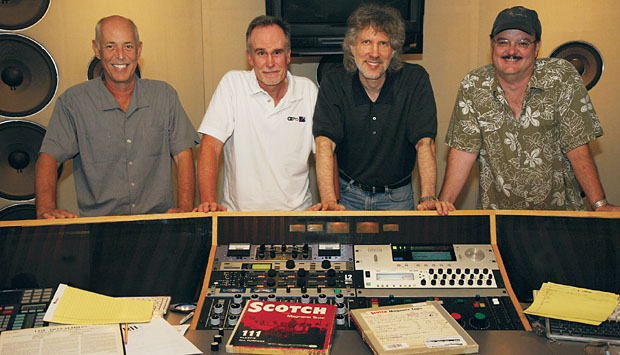 By GREG SIMMONS
October 12, 2011
Sign in to view read count
Music Matters has been reissuing classic Blue Note jazz records since 2007. It has dug deep into the catalog, remastering lesser known, infrequently heard titles, and done so with passionate attention to presenting the highest possible sound quality. Offering an analog solution in a digital age, this exceptional series is available on 45rpm vinyl records only. It is an extraordinary collection of music.

With some of the Blue Note recordings now pushing 60 years old, it's wholly appropriate to release a first-rate reissue series, but to do it right requires people who are fanatics about these titles and who bleed enthusiasm for the music. It also helps to have folks with the attention to detail necessary to worry about the weight of the vinyl and the type of ink used in the jackets. It requires folks who are a little crazy about making the best possible pressings, and are willing to go to any length to make it happen. Ron Rambach (far left above), owner of Music Matters, and his friend and co-conspirator, Joe Harley (second left, with Steve Hoffman, second right, Kevin Gray, far right), have personally overseen every element of the reissue series since its inception. They're both a little nuts about classic Blue Note records, and they've channeled their madness into an exceptional collection.

Rambach and Harley are music fans first and foremost, and they approached reissuing the Blue Note catalog as an extension of their dedication to the label. Original 33rpm Blue Note albums are scarce and outrageously expensive. Many collectors have at least one original Blue Note that they just had to buy, even though the vinyl had clearly been used for target practice. The label has so much cache that some folks will pay a premium for a scratchy, damaged Blue Note record just to have it, even when a CD of the same performance may be readily available. Rambach, a long time dealer in collectible vinyl, was concerned that people would only ever hear poor quality copies, and that they'd overlook lesser known titles: "I didn't know how the next generation was going to hear this music. It's the music that needs to be discovered. It's about bringing these guys back." Both men had a deep knowledge of the label's catalog through their own collections and felt strongly that, handled properly, a reissue could offer something new to enthusiasts.

Blue Note—under its original ownership— wasn't just any jazz record label, and therefore its recording history merits the special attention. Alfred Lion cut his first tracks in 1939 with some 78rpms of pianists Meade Lux Lewis and Albert Ammons. Those sides became the first releases of the fledgling Blue Note label, which went on to become synonymous with some of the highest quality and most innovative jazz of the 20th century. The label really hit its stride in the post-war years, first by embracing bebop and the new long-playing records, and then by continually searching out and recording fresh talent. Lion recorded many important musicians who later became legends when they were coming up in the mid 1950s and 1960s, as well as a few older artists for good measure. The label's A&R men, first Ike Quebec, and then Duke Pearson, were accomplished musicians themselves who were able to spot and attract first-rate talent to the label. Towering giants such as pianist Herbie Hancock and saxophonists Dexter Gordon and Sonny Rollins all made records for Lions; as did lesser-known greats like saxophonist J.R. Monterose and pianists Sonny Clark and Herbie Nichols. Lion gave a voice to many innovative, often young jazz musicians, whose forward-thinking compositions, bold interpretations and extraordinary performances became instant classics. Quite simply: he recorded the best artists he could find and gave them the freedom to make their own music. In the process he built what is arguably the most important catalog of recordings in jazz.

Constant recycling of that catalog keeps many titles available, but reissues often come with compromised sound quality, especially on CD. The most comprehensive CD series—released in the early years of this new century—is a mixed bag of compression and alterations that doesn't do anything to flatter the music. There have periodically been a few great reissues of selected titles, but these have tended to stick with well-known, popular records. Saxophonist John Coltrane's Blue Trane (1957) is always in print, often in deluxe packages, while something like Gil Melle's Patterns In Jazz (1956) rarely sees the light of day. This approach to reissuing is an unfortunate economic reality of the record business. Popular titles simply sell more copies. The Blue Note catalog has not been spared from this myopic strategy, which is unfortunate because many of the lesser-known titles are every bit as musically satisfying as the big hits. This sin of omission was something that Rambach and Harley were determined to avoid. "We didn't want to focus on the war horses of the catalogue," explains Harley. "The tapes are a treasure trove of great material, and one of the goals from the beginning was to bring out great titles that were under-heard by the public."

To get the best possible sound quality for the project, Rambach and Harley sought out the recording art's equivalent of an act of God: access to the original master tapes recorded by Rudy Van Gelder in Hackensack, NJ. The tapes are archived by Blue Note parent EMI, and obtaining them involved running a gauntlet of terms and conditions. Despite the obstacles, the original tapes were an absolute requirement for the project. Digital copies, or even second-generation tapes, would introduce sonic compromises that were simply not compatible with the series' goals. Using the master tapes would ensure that the new pressings were never more than two steps away from the original sessions. Anything less than the original tapes would have made the project pointless. Of course, getting those tapes is not as simple as borrowing a book from the library. Harley and Rambach began by writing letters to EMI, with little success. Eventually they tapped a friend, Michael Cuscuna, who, in addition to having a long history with the label and solid connections at EMI, is also the conservator of the great Francis Wolff photographs that often grace the covers of the Blue Note albums. With Cuscuna's intervention and support, and assurances that this would be a low-volume niche project, EMI gave the green light, and in 2007 the Music Matters reissue series was in business.

The Blue Note tapes are unique, irreplaceable documents of a high point in American music, and therefore require special precautions. EMI takes great care in preserving this material in specialized archives. Of course, every time a tape is played or even handled there is a risk of damage. Music Matters had to secure a one million dollar insurance policy for each tape before EMI would release them. Under those circumstances even the most prosaic task acquired new gravitas. Harley recalled the anxiety of picking up the masters for saxophonist Hank Mobley's Soul Station (1960) from the courier, looking at the box sitting on his front seat, and having nightmare visions of wrecking his car on the way to the studio. From a distance it seems like quite an honor to have this problem, but it's also easy to imagine the anxiety.

As an archive medium, magnetic 50 year-old reel-to-reel tapes run the risk of degradation that comes with time, handling and use. The condition of the tapes was a concern from the outset. A compromised master could prevent the Music Matters crew from getting a first-rate analog impression with which to stamp new records. As luck would have it, those fears proved to be largely unfounded. The Scotch tapes (yes, that's the brand) were in surprisingly good condition and proved to be easy to work with. The sound quality was—for the most part—completely intact with remarkably few anomalies. A few titles suffered from sub par sound quality, and these were not included in this collection, but by and large the material was ready to go.

Starting with the introduction of the compact disc 25 years ago, collectors and audiophiles have kept a torch burning for needles and grooves, but in the mass music market vinyl records were as dead as the DeSoto. That began to change in recent years, partially out of nostalgia and a certain hipster factor, but also because when produced properly, records just sound damn good. Digital music, whether by CD or file sharing, disassembles music into ones and zeroes for storage, and then reassembles it for listening. By comparison, true analog—tape to lathe to record—is a direct impression of the sound. From the outset Rambach and Harley believed that only a true analog copy of the Blue Note tapes would yield the sound quality they wanted, so they decided to release the series on vinyl only. They made the additional decision to release each title on two 180gram 45rpm LPs instead of one 33rpm platter because, in their estimation, the higher velocity of 45rpm rotation reduces the impact of distortion as well as the loss of high frequencies as the needle moves to the center of the album. It costs more, of course, as everything—albums, covers and sleeves— has to be doubled to include all the music, but they are convinced the effort pays sonic dividends. Frankly, it's hard to argue with the results.

Vinyl mastering and pressing is a dwindling art and there aren't many people left with the proper knowledge and equipment to make a really first class record. As they laid out their plans, Rambach and Harley knew exactly where to turn. Mastering duties were entrusted to Kevin Gray, owner of Cohearent Audio. With almost 40 years in the recording business, Gray has been the technical end of a number of recent, high-quality reissue projects. The Cohearent studio has an array of very high quality vintage components to facilitate transferring the music from tape to lacquer, including a modified Studer reel-to-reel deck, custom class A amplification, and a vintage Neumann cutting lathe, all heavy duty gear with the capacity to make first rate stampers. Despite decades of experience with this kind of material, Gray was still a little star-struck by the process. "It's an amazing window into history," he says. "The boxes have all of Rudy Van Gelder and Alfred Lion's hand written notes all over them." In some cases those notes, often from Lion to Van Gelder with production instructions, helped guide the remastering process as well. 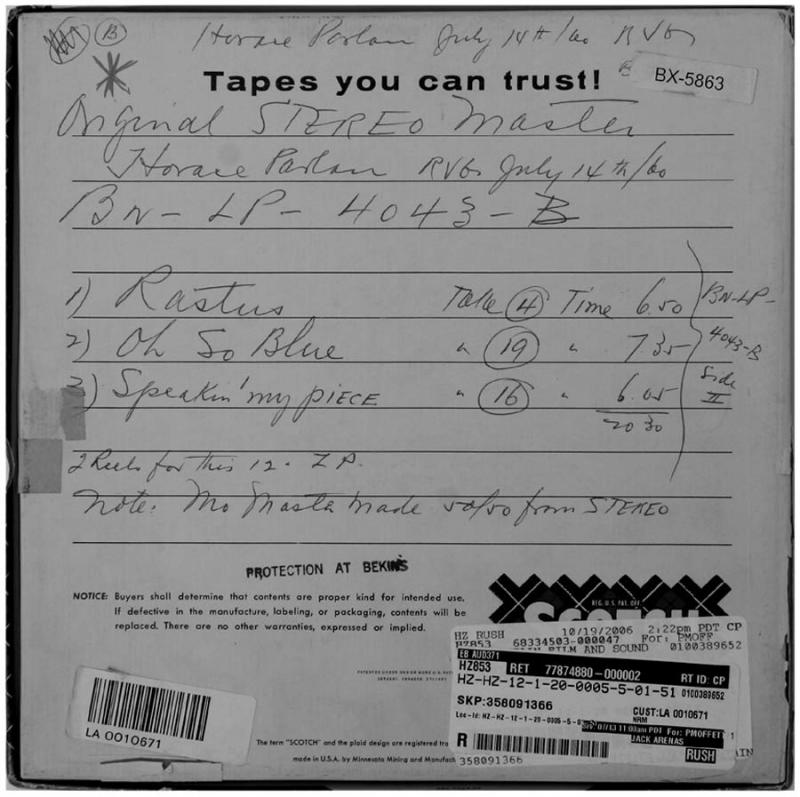