Frank Anthony Monterose Jr. (”J.R.” is simply a corruption of the Junior) is a native of Detroit, where he was born in 1927. He is not, however, a Detroiter by any other token than the accident of birth, for before he was old enough to talk, let alone blow a horn, he was transplanted by his family to Utica, N.Y., which has been home base ever since.

J.R.'s musical studies were centered mainly on the clarinet; he had very little formal saxophone training. The first great influences were Coleman Hawkins and the late Chu Berry; but “the real inspiration that decided me to take up tenor seriously rather than clarinet or alto was, believe it or not, Tex Beneke.”

J.R. was still in his early teens when his extra-scholastic musical experiences began to broaden, all the way from the Utica Junior Symphony to a nearby strip joint. Meanwhile he was learning a few things about modern harmony. “Most of my influences in learning chord changes were piano players. I dig pure harmonies; I'm for the Bud Powell school. Sam Mancuso, a guitarist and pianist with a real natural talent helped me find the way.”

After working with various territory bands in 1948 and '49, J.R. caught his first taste of the big time, in a somewhat distilled form, when he was invited to tour with an orchestra led by the late Henry “Hot Lips” Busse in 1950. “There was some good young fellows in the band,” he recalls, “and once in a while there was an opportunity for a few solo bars.” But after a long tour that wound up in California he felt sated with enough shuffle rhythm to last him for the rest of his life.

Back home, he worked locally around Utica and Syracuse through most of 1951 before spending six months with Buddy Rich--”That was when Buddy had a big band, with Davey Schildkraut, Allen Eager, and Philly Joe Jones playing second drums. But you just don't get enough blowing to do in a big band. After six months I was drugged with my own playing, and I went back home and spent the next couple of years working in little joints but with good men.”

The next opportunity to display himself came in the Claude Thornhill band. Again, there were distinguished colleagues, among them Gene Quill and Dick Sherman, but again there was the frustration of big band limitations, and after a couple of months he decided he couldn't make it.

Next came a steady gig for a solid year at the Nut Club in Greenwich Village with Nick Stabulas, under a liberal arrangement that allowed him to send subs in anytime he liked. This offered him chances for gigs with such intrepid modern jazzmen as Teddy Charles and Charles Mingus. “I learned something from those associations; I didn't go about it the same way they did, from studying; I got it all from listeneing, but I guess I was doing what they wanted and they seemed to dig it.”

“Some of the playing with Mingus was extremely fruitful but a lot of it was utter chaos,” J.R. recalls.

He was glad to leave, after an argument, and join Kenny Dorham's Jazz Prophets. This was a short-lived band but they did record (The Jazz Prophets for Chess, and 'Round About Midnight at the Cafe Bohemia for Blue Note) and for Monterose the experience was valuable. “Kenny Dorham was one of the greatest leaders and players I ever played for in my life. A wonderful musician. It definitely was a complete change to go to work with Kenny because I felt as though I had lost my own conception of playing with Mingus.”

His style has been likened to that of Sonny Rollins, and indeed he will tell you that after hearing Sonny play in 1949 he went home and threw out all his Stan Getz records. Monterose was also influenced by Charlie Parker and, to a lesser degree, John Coltrane, but he long ago left behind the concept of listening to absorb other concepts.

Even as a youngster he understood that it was pointless to copy his illustrious contemporaries. Consequently Monterose solos were always his own. And he says, “Why not play your own music if you're a jazz player? Jazz is supposed to be self-expression. You've got to have a need to say something on your instrument--to get it out. If I can't be myself, there's no point in being in jazz.” Show less 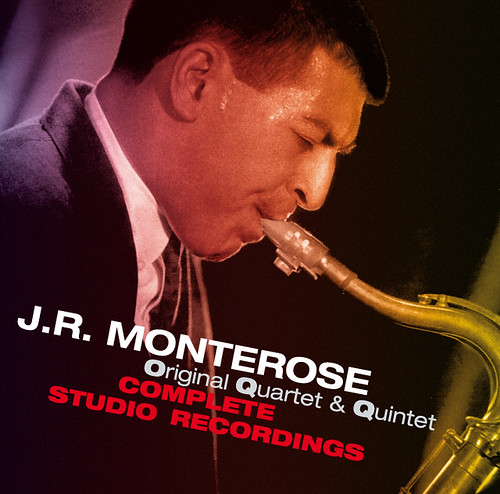 And A Little Pleasure

All About Jazz musician pages are maintained by musicians, publicists and trusted members like you. Interested? Tell us why you would like to improve the J.R. Monterose musician page.