By Marc Davis
December 9, 2014
Sign in to view read count 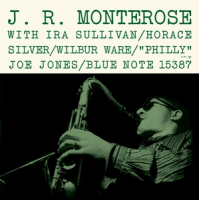 J.R. Monterose is that rare bird at Blue Note Records—the guy who got one shot at leading a band, then practically vanished from the face of the earth.

It's odd because the history of Blue Note is filled with famous guys (almost never gals) who took up residence and stayed just about forever. Think of Blue Note, and I think of Art Blakey and the Jazz Messengers, Lou Donaldson, Jimmy Smith, Horace Silver and Lee Morgan. Big names who made hard bop and soul jazz the big thing in the 1950s and '60s.

And then there's J.R. Monterose—truly a one-hit wonder. And based on this album, it's hard to understand why.

Now, Monterose wasn't completely unknown in 1956, when he recorded this self-titled album with a fantastic band (Horace Silver on piano, Ira Sullivan on trumpet, Wilbur Ware on bass and Philly Joe Jones on drums). He had nice turns on Charles Mingus' Pithecanthropus Erectus and on Kenny Dorham's 'Round About Midnight at the Café Bohemia—both recorded earlier the same year.

Most folks seem to like this Monterose album. The Rolling Stone Jazz Record Guide gives it 4 stars. Allmusic gives it 4.5 stars. On Amazon, 7 of 8 listeners give it a full 5 stars. Yet I don't really enjoy it. I just don't like Monterose's harsh tone.

The rest of the band is great. Silver and Sullivan, in particular, swing like crazy. (Has Silver ever made a bad record?) This really could be a The Jazz Messengers record if you substituted Art Blakey for Philly Joe Jones. The themes are all terrific hard bop tunes, including the three written by Monterose himself.

But for me, Monterose ruins the mood. The very first song, "Wee-Jay" by Monterose, has the tenor spitting out staccato honks and squawks to start his solo. It was a huge turnoff. (All the more strange because there's an alternate take that ends the CD that I like much better.) On other songs, Monterose shows his bop chops, but again, the tone is high-pitched and squealy to my ears. It's a personal preference, I know, but I can't turn it off.

Otherwise, this is a pretty good record, and where others take the lead, it's downright terrific. I might even want to hear more Monterose in different settings. I see a duet album with Tommy Flanagan in 1990. I'll try it. Even one-hit wonders deserve a second chance.